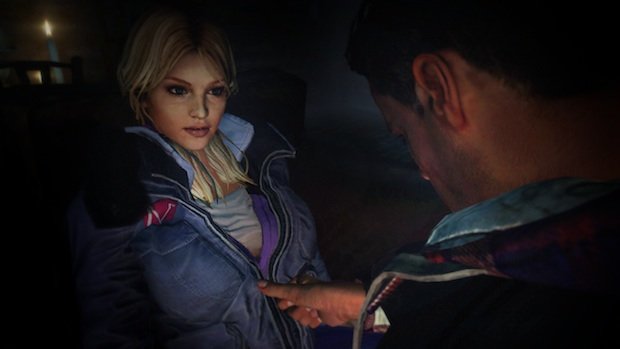 Announced at gamescom earlier this year, Until Dawn puts players in control of the cast of characters in what looks to be a classic teen horror film. It’s a PS3 title set for next year, and it uses the PlayStation Move controller exclusively.

If you’ve seen enough horror flicks, you probably know how this goes.

Jess and Mike are pretty hot to trot by this time, but they’re not opposed to taking a little stroll in the woods to find this cabin. They make an adventure out of it, trying to scare each other as they trudge through the snow in the dark. Animals moving in the woods spook them a bit, but they’re still having fun. For now.

The fun of Until Dawn is in its presentation. It plays out exactly like a horror film, complete with the pop-out scares and sharp, snarky writing you’d expect. There’s also plenty in the way of funny dialogue and situations, coming directly from well-versed horror film writers.

Until Dawn is unique in that it uses the PS Move controller exclusively. Most of the time it serves as a flashlight for the eight game characters. Movement is controlled by pointing the torch in the desired direction, and the analog trigger controls the speed of movement. The main action button on the controller takes care of most of the world interactions and puzzle solving. In the times where a character is using an item, 1:1 movement of the Move controller lets the player take over. Turning a key, pulling blinds, or firing a gun are done exactly as you’d expect.

The trek to the cabin stays fun until the couple hears a strange noise and soon after finds a deer that looked to be ripped open by something terrible. As they examine it, it’s ripped away. Scared shitless, they take off running until they find the cabin, and then they lock themselves inside.

In the normal world, strange noises and dead animals would have killed the mood. But in the world of horror flicks, the lovebirds are ready to rock in minutes. First, Jess insists, the blinds must be closed and the fireplace must be warm. More strange noises hinder their progress for a bit, but eventually Michael gets her down to panties and bra.

Just when the getting gets good, Jessica is violently ripped through the window of the front door by some unseen attacker, leaving a trail of blood out the door and through the snow, leading out to the woods. Mike runs to follow the trail, rifle in hand. This leads him into the depths of an abandoned mining operation, where he finds Jessica’s maimed body laying in a heap on a lift. Just as the attacker sneaks up on Mike the screen goes black.

If you’re keen on this particular kind of teen horror flick, I think you’ll really enjoy Until Dawn. It stretches the typical movie story into a 5 or more hour adventure where you’ll eventually control each of the eight cast members. They all can die, or you can complete the game with all surviving — it’s up to you.

I could see Until Dawn being a great game to play with a small group, with the lights out and cold beers on hand. The group could make calls on how to proceed, and the Move controller could be passed off.

I’m looking forward to popping some popcorn for Until Dawn.