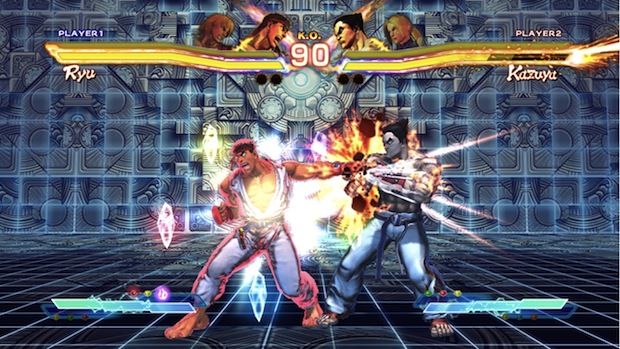 Yesterday at Capcom’s New York Comic-Con panel for Street Fighter X Tekken, producer Yoshinori Ono unveiled the game’s new Gem System. And I’ll be straight with you: Some of the audience groaned. Some heckled. But the world of fighting games is like that, isn’t it?

The truly outrageous Gem system gives fighters power-ups that they can mix and match. You’ll be able to choose from dozens of gems that modify abilities and stats. This lets you sort of cover your ass with perks — it’s like Materia (Final Fantasy VII) for your fighter! More groans? Those are my fault.

With this system you’ll start out with a combination of Attack, Defense, Speed, Cross Gauge, and Assist gems. As you’d guess, having the Defense gem on increases your fighter’s defense stats. That’s exactly what casual players like myself have been needing, and according to Ono, that is exactly the point of this new feature. He’s working to bring this game to as many gamers as possible.

Other news tidbits came out of the event. First, a release date: March 6, 2012. Also, a PC version of Street Fighter X Tekken is being worked on. Finally, Street Fighter’s Rufus has been added to the line-up.

Gems, huh? What do you think about this new system?