Excited about the upcoming Capcom Arcade Classics releases for Wii in 2011, I revisited the Capcom booth at Comic-Con today to give the only classic they had available a spin. This was SonSon, a very old arcade game. It turns out that this was only the second game the company ever made, originally released in 1984 in arcades. Despite its age, it was still fun. Fun and hard.

You play as little monkey-ish guy who is out to make his way to a place called Tenjiku. There really is no other story for the game other than it opens to say “Let’s go Tenjiku!” Someone from Capcom told me that what they meant to say is “Let’s go to Tenjiku!” or something like that. If you squint you’ll notice that you’re playing as Monkey, and if you use your imagination you’ll realize that this game has very loose ties to the classic Chinese story Journey to the West. ‘Just like Enslaved?’ you ask? Not quite. It’s not near that complex a game. 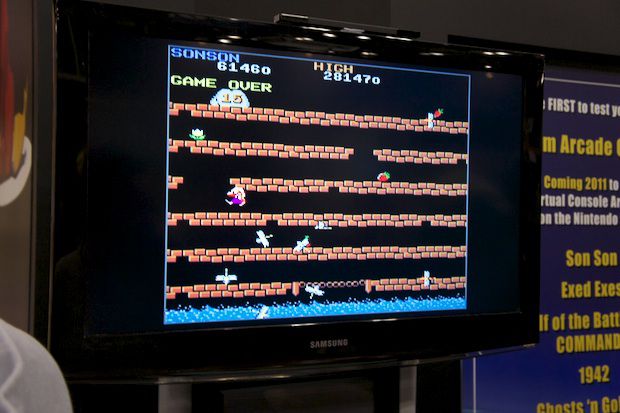 SonSon is one of those old left-to-right scrolling platformers where you jump up or down to higher or lower platforms while moving forward, working to either shoot or dodge oncoming enemies. This is played with a Wii Remote held sideways. You shoot fire from your staff to take out all the beasts that stand in the way between you and Tenjiku. If beasts are running at you on your current platform you only need to tap down or up to move to another. It’s pretty simple, but it works.

In SonSon you start out at level 20 and work your way down, with Tenjiku waiting for you at the end. I got to level 16 on my first try and felt pretty bad about it. Capcom told me that was pretty good, though. The highest anyone had reached at the time was level 8. You’re able to play this game cooperatively with a second player, though Capcom did not have that option available at the time. I wonder if the game would be any easier with a second player helping. I doubt it. Don’t let that discourage you, though. SonSon is fun in that punishing way Dig Dig is.

SonSon is coming to the Wii next year along with the other classics.