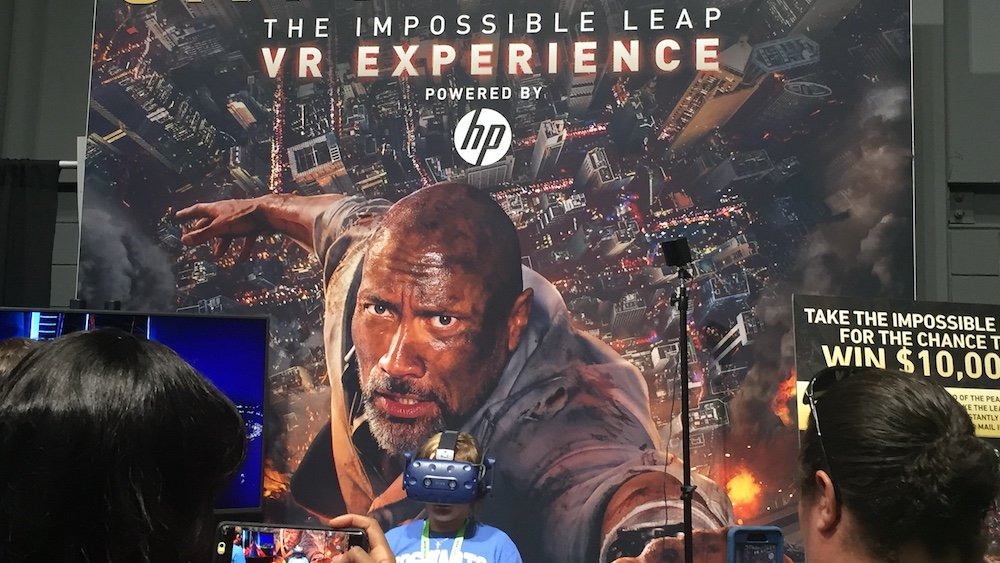 Pack it up, everyone else in the industry

Virtual reality has the magical ability to take you to an unlimited array of locales, and a display I spotted at the New York Comic-Con initially made the argument that the medium has reached its full potential. Based on the Dwayne Johnson movie Skyscraper, this “Impossible Leap” VR experience allowed users to reenact the iconic(?) sequence in which Johnson leaps from a crane into the skyscraper. Naturally, I felt compelled to take advantage of the opportunity become The Rock.

To my disappointment, the experience was not actually playing as Dwayne Johnson—I looked down to see if I had a virtual prosthetic leg to only find that I was an anonymous floating torso. After a brief demo that taught me how to walk, using your arms to flail the Vive controllers up and down, I was on an elevator heading to the top of the crate; rather than be The Rock, he was calling me on a cellphone, entrusting me to make the jump to save his family. I had to be the Rock that The Rock himself could not Rock.

I knew I couldn’t let him down.

I seriously spent an hour in line at #NYCC to look like an idiot pic.twitter.com/EeJqn8YlB1

Of course, I still wanted to use my time with this demonstration to try to break it; unfortunately, I could not fall to my untimely death from the crane before attempting the jump, denying me of my wish to free myself from my virtual shackles and hopefully reincarnate into the Scorpion King.

For scientific purposes, I threw my first leap attempt of three, curious to see the result—I slowly fell into the fiery depths below. After respawning I gave it my all, swinging my arms like crazy as if though I were playing Boxing in Wii Sports, undoubtedly looking moronic. I had to keep the running motion while flying and falling, giving myself the objectively funny image of The Rock running on air, flutter jumping like Yoshi until I stuck the landing—because that’s how physics work. My virtual cell phone rang; it was The Rock, thanking me for my courageous deed. You’re welcome, The Rock. I’d do anything for you.

It’s taken years of iteration and refinement, but virtual reality has finally made it. Just like the Fast & Furious series, all the medium needed was a shot of adrenaline in the form of a charismatic wrestler-turned-actor. Welcome to the Dwayne Johnson-infused future.

Filed under... #Film or TV#Flixist#Virtual Reality