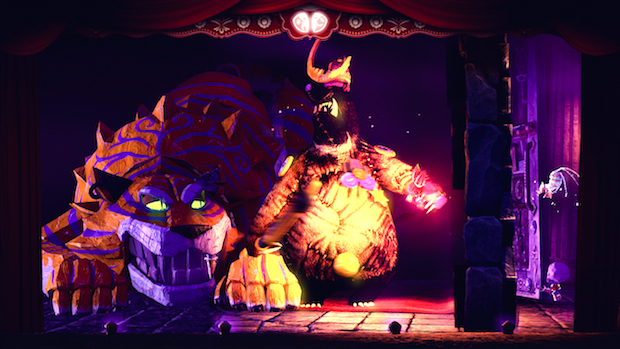 I got a fair bit of hands-on time with Puppeteer at New York Comic-Con this weekend, but the best of what I’ve seen of the game so far was still hands off. And in 3D.

Sony was kind enough to give us a peek at a boss fight from later in the game. This third-level boss, Tiger, is a multi-tiered affair that puts Kutaro’s jumping/cutting mechanic to good use. Kutaro’s eventual goal was to cut Tiger’s tooth out, and part of his attack had him chipping away at the tooth’s exposed nerves with scissors. Gross!

The boss fills the entire screen, and its attack patterns has it using its huge face to chomp into the ground at Kutaro, or using its paws and claws to swipe at him. 3D or not, this was one hell of a well-designed boss battle, with everything from platforming to quicktime prompts being used beautifully. Kutaro eventually rips this feline to shreds with his scissors, and every bit of it is gratifying.

But wow! This battle was absoultely stunning in 3D, and not in that cheap pop-out way you see in kids movies, either. The view had depth that was easy to appreciate, and an effect that was really easy on the eyes. Sony credits this to the game’s use of a fixed camera, and being able to pump the extra horsepower left over from this into the stage-lighting engine.

Whatever they had going on under the hood, the battle looked like beautifully animated puppetry, like you were watching a really intricate demonstration inside of a box.

Words won’t do the trick here. You have to see Puppeteer in person to appreciate this. The game is already striking in motion, but it’s dazzling in 3D.