Red Dead Redemption’s John Marston has seen his fair share of cougar attacks and smarmy outlaws. But is he ready to take on a mysterious infection that is raising the dead across the game’s dusty, open world?

While “Undead Nightmare” will bring hours of new content to Red Dead Redemption, Rockstar wasn’t willing to show its entire hand at New York Comic-Con this week. Instead, we were treated to a small section of gameplay, only one of the game’s story missions, but one that gave us a nice glimpse of what to expect when the downloadable content ships later this year. 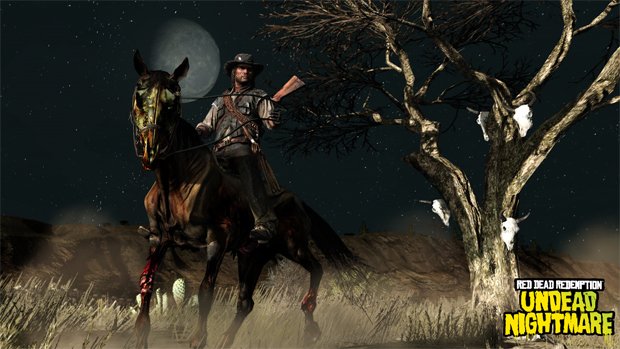 On this particular demo mission, Marston is tasked with “cleansing” a graveyard, having heard that this baffling disease has spread to this particular area, raising undead ghouls from their graves. The goal is to burn up a series of coffins, marked on the mini-map as yellow dots. To do this, you’ll use one of the game’s new weapons, a flaming torch. While Marston will pull out the torch and burn the wooded caskets with a context sensitive press of a button, it can also be used to light zombies on fire. The catch, of course, is that the fire won’t necessarily slow them down, or even kill them. If your worst nightmares include being pursued by flaming ghouls, you might want to think twice before using the torch in a melee attack.

In the demo area Rockstar allowed me to play, the odds were stacked against me, with only 20 bullets in my pistol to start. The graveyard area in this particular mission was small, and the zombie to Marston ratio was overwhelming. Not at first, mind you — burning an initial casket triggered a few of the undead to attack. The more caskets you burn, however, the more creatures join in on the assault. Thanks to “Godfather of the Modern Zombie” George A. Romero, zombies in Red Dead Redemption are mostly bullet sponges. Feel free to fire off a slew of bullets in their general direction — sure, that might slow them down — but don’t expect them to drop quite so easily. A well-place bullet to the brain, however, results in a gratifying splatter (including a nice chunk of the skull flying through the air), the creature crumbling to the ground as a pile of undead meat.

Given the lack of ammo, looting the “really, for real this time” dead for bullets and other items is key, along with accurate firing. The latter is problematic to do, especially when you consider that being chased by reanimated corpses coming at you from all angles is (to put it mildly) a trying experience. Fortunately, you’ve got a few things in your arsenal that help turn the odds in your favor. First, the “Dead-Eye” targeting ability which slows down time and allows you to “paint” targets makes its return. Second, are the game’s new context-sensitive melee moves, which include fresh animations like propping the barrel of a gun under a zombies chin and pulling the trigger. The results are as expected, a Gallagher vs. Melon-like display of fractured cranium bits. 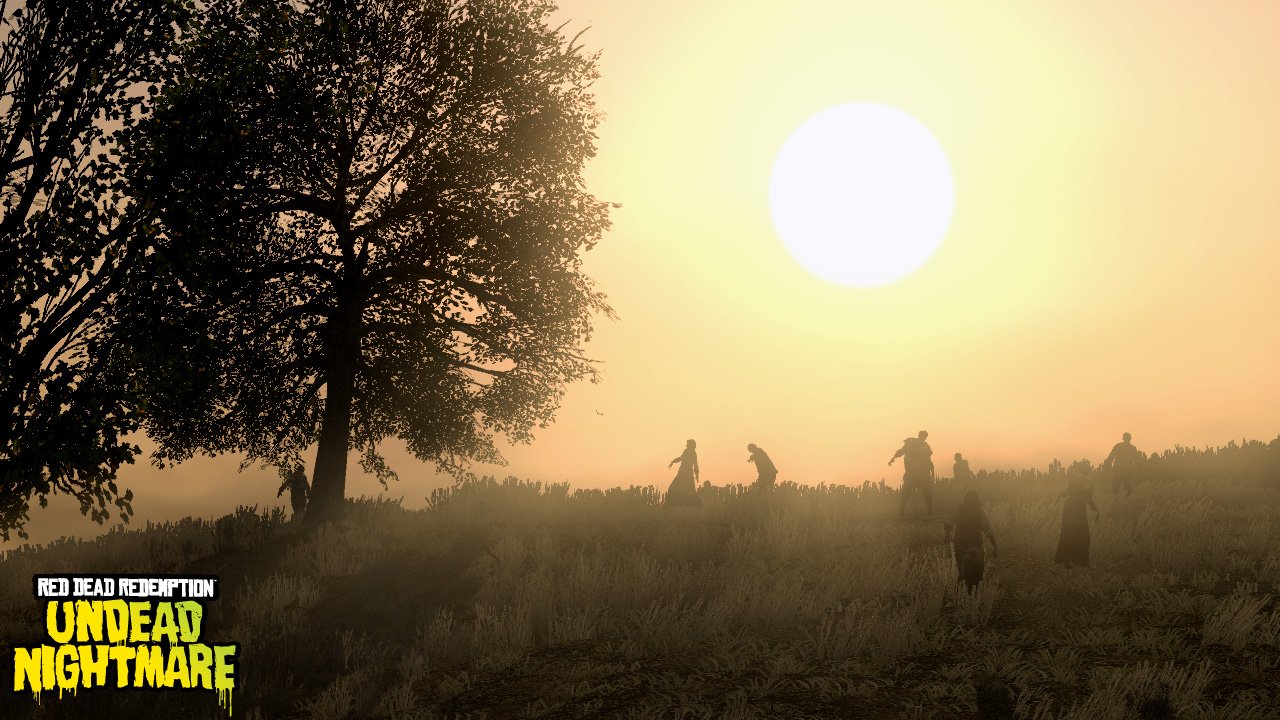 Also new to Marston’s arsenal is a blunderbuss, a shotgun style weapon that uses zombie parts as ammo. Yes, that’s right, I just said there’s a gun that uses parts of corpses as ammunition. Once you load the gun with the slabs of undead meat, you can fire the gun off for a satisfying zombie explosion. The upside here is that this is a one-shot, no more zombie situation that can come in handy in a pinch. The downfall, as if there could be any to raining zombie gore all over the place, is that the bodies are obliterated and can’t be searched for more ammo.

The zombies of Red Dead Redemption come in a number of varieties, four to be exact, and all of which I encountered in my short demo. There’s your normal, run of the mill lumbering creature that moves at a moderate pace, annoying but not particularly dangerous unless in large numbers. You’ll encounter faster creatures that also jump, as well as stronger and larger brutes. Finally, the now-classic spitter can bother you with dangerous green slime from a distance. (Were zombies spitting acid-like goo from their mouths before Left 4 Dead, really? Thanks a lot, Valve.) 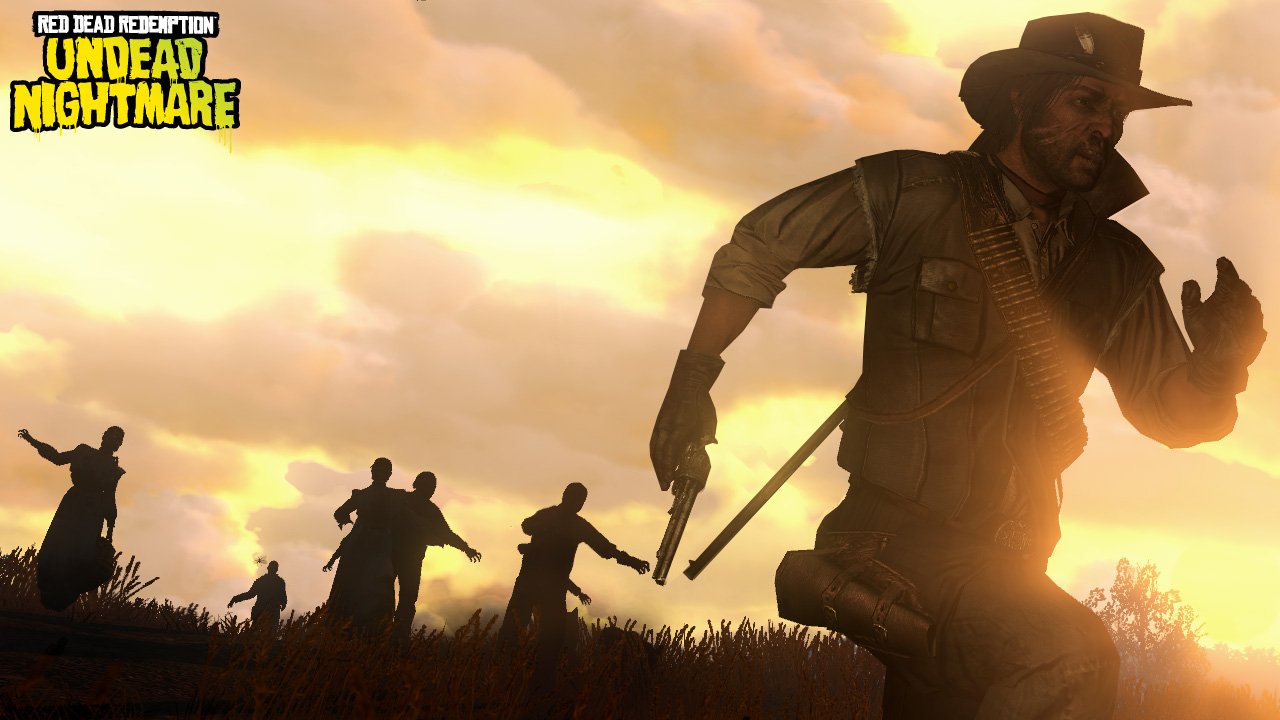 Rockstar is promising a beefy single-player experience, complete with new cut-scenes and in-game dialogue, with players meeting both new and old faces throughout their journey. Throw in undead animals (none of which I encountered in my demo, but expect to run into a flesh-eating bear, at the very least), along with new multiplayer features (which Rockstar is keeping under wraps for now), and the $9.99 asking price sounds like a deal for fans of the cowboys and zombies.

Rockstar hasn’t committed to a release date for “Undead Nightmare,” but one could speculate that a release before Halloween would be fitting.