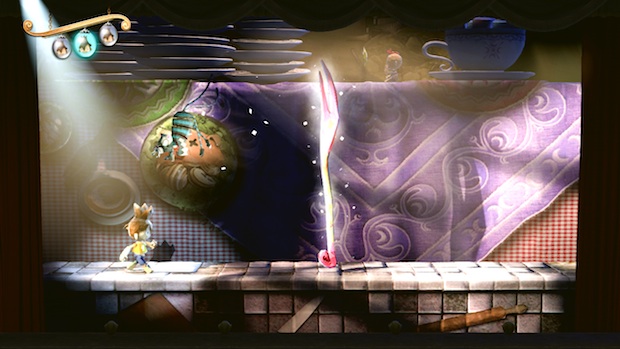 I finally had a chance to go hands-on with Sony’s upcoming PS3 platformer Puppeteer here at New York Comic-Con at a PlayStation press event. It’s as great as I imagined it would be after hearing about it at gamescom earlier this year. I was able to play exactly what was shown at gamescom, and I really enjoyed the solid platforming and charming presentation.

Puppeteer is a platformer that plays out on a fixed theater stage. It’s based on a Japanese performance art called bunraku, and it uses constantly changing sets and lighting to tell its really weird story.

The 2D platforming action is really polished in Puppeteer. Kutaro has to vault over spiked barrels, hamburgers, mice and all kinds of other strange things that come at him in this constantly changing world, which has you continually hovering over the jump button. Part of this first bit of gameplay has him running up a spiraled, rotating stage where spiders, bats and other baddies have him ducking, jumping and dodging. Again, it’s all very tight and responsive.

You’ll want to be extra careful with your platforming as Kutaro goes down pretty easy. His ‘life’ is tied directly to his detachable head. If an enemy comes in contact with him, his head falls off and starts rolling away. Kutaro has three seconds (like the three-second rule of food) to pick it back up and put it on his head before he croaks. It’s quite funny to have to stop in the middle of platforming to run backwards, arms blindly outstretched, to pick up your rolling head.

Kutaro also has the ability to find other heads to use as additional life, letting him pop another on if one happens to roll away. Some of the found heads come with bonus strange abilities that let him access new areas, or uncover hidden secrets. These heads add puzzle elements to mix up the platforming.

I came away most impressed by the scissors/cutting mechanic, which is centered around an enchanted pair of scissors called Calibrus. These have Kutaro chopping up enemies and obstacles by mashing the square button. By jumping and continually cutting, Kutaro could stay airborne, with each snip propelling him forward in the air, toward the direction he faced. This totally changed the left-to-right 2D platforming play established early on, adding verticality to the mix. Though early uses were more tutorial examples of this mechanic than anything else, I really enjoyed snipping up cloth-based enemies, or cutting through spider web-like walls. Even in this first stage I could see that the developers had fun with this mechanic.

Puppeteer is really unique as far as presentation and story goes, but the gameplay is straight-up solid platforming. Well, for a bit, and then the cutting mechanic is added in.