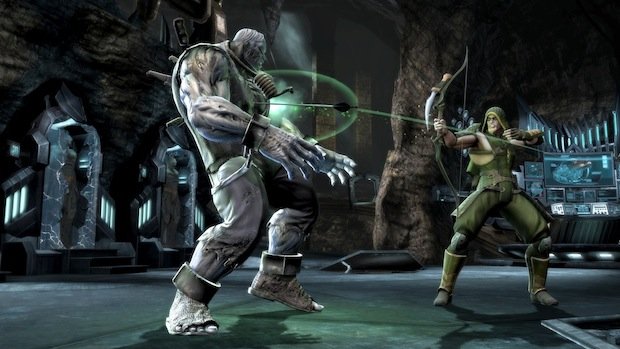 Superhero Green Arrow was just announced for upcoming fighter Injustice: Gods Among Us earlier this week. I had a chance to go hands-on with him for a few rounds here on the New York Comic-Con show floor, at the DC Entertainment booth. Here’s my initial impressions:

As you can imagine, Green Arrow is a super zoner. He can get all up in an enemy’s business with his arrows, though they don’t fire off as fast as you’d imagine, which is probably a good thing. What’s nice is that his bow can be drawn back and held while moving or jumping, though getting too crazy will release it.

Arrow actually has three different types of projectiles to play with: fire, ice and electric. The effect the ice arrow has would make Sub-Zero proud! The player can change out quivers by tapping in a quarter-circle forward or back, or double-tap down, and the special button. Firing is also set to the same button.

Arrows fire forward by default, but directional commands let you get in some air defense or jumping shots if needed.

Though Green Arrow’s game is mostly controlling the fight with his ammo, he can still get in close if needed. I liked coming in close with his low-hitting slide move, and once in range, tearing the enemy up with a spun blade move. He doesn’t hit hard, but what he does is respectable.

With only three or so rounds of play, it’s hard to make a bigger call right now, but I can at least say right now that Green Arrow is pretty fun to play.

Filed under... #Injustice: Gods Among Us#NetherRealm