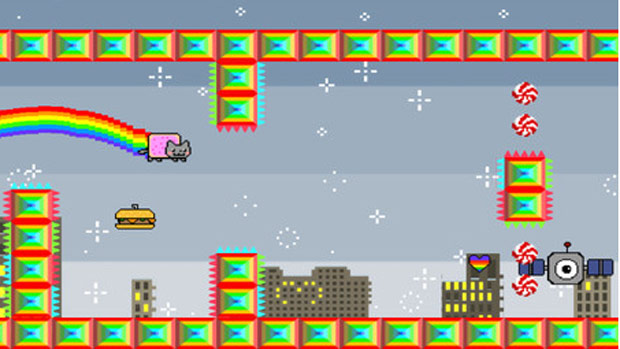 I gave it a spin to see what has changed from 21st Street Games’ XBLIG version, and to see whether or not it still induces seizures on the smaller screen real estate.

Nyan Cat Adventure is best described as an endless runner meets Techno Kitten Adventure meets acid. Like 21st Street Games’ other cat game, you try to survive for as long as possible while guiding your character though a horizontal stretch filled with enough background craziness to instantly lead to an attention deficit.

The main attraction, gameplay-wise, is Party mode, which changes the gameplay as you progress. Sometimes you just tap to jump over obstacles, sometimes you tap to change your Nyan’s gravity a la Jetpack Joyride‘s Gravity Boots, and at other times you’ll either tap and hold to fly or tap to boost from toaster to toaster. In the full version, you can choose these different individual types of play by selecting their respective modes.

Being a high score game, you can collect points and multipliers throughout the one level on offer if you care to. Health pickups can replenish hearts you might lose when you hit spikes, while invincibility works as advertized. As an endless runner type of game, Nyan Cat Adventure doesn’t really do anything new when it comes to its core gameplay, but that’s not really the appeal of the game.

The real appeal comes from the drug-fueled pills which create effects to bombard your eyes with enough flash to either make you stare at the screen, fall on the ground foaming at the mouth, or go “Whoa” in a Keanu Reeves fashion — depending on your drug of choice. The screen can start to flicker, grow larger and smaller like the Rise of the Triads shroom effect, feature a seizure-inducing background, or shake twitchingly as you try to keep track of your Nyan. Suffice it to say, you’ll need a good dose of “mental state enhancers” to experience it to its fullest (I played it sober for what it’s worth).

The main difference between the iOS and XBLIG versions are the amount of Nyans you can play with. Afro Nyan, Taco Dog Nyan, Game Boy Nyan; there is no shortage of Nyans to be sure. Their appeal is aesthetic and they don’t change the gameplay, so if you already own the XBLIG version, there’s little incentive to buy the full iOS version. Having said that, the smaller screen doesn’t impact the effects at all; your eyes will still be glued to the screen as you feel parts of your brain’s higher functions slowly being sucked into the game.

Nyan Cat Adventure is a cute and imperfect little game which you’ll whip out after a night of clubbing, just to observe the face of whoever you hand it to, or whenever Netflix is buffering your stoner movie of choice.