For the record, I’m a huge fan of the Nintendo DS; on any given business trip I take, I reach for Nintendo’s handheld for in-flight entertainment before anything else. But for every original, innovative title that takes advantage of what the system has to offer, there are forty-three shovelware titles that probably started development on the Game Boy Advance or cell phone. Lexis Numérique’s Mr. Slime is not one of them.

The premise of Mr. Slime revolves around two factions, the Slimes and the Axons. Engaged in a bitter rivalry over land, every 40 years brings a war in which the two sides battle as part of a ritual to define territorial control. As a young Slime who goes by the name of Slimey, you set off on an adventure to discover why and how this brutal ceremony began.

Designed by Paul Cuisset (best known for his work on the classic platformer Flashback), Mr. Slime looks to be a charming, original title that makes solid use of the unique features of the Nintendo DS. Publisher SouthPeak Games had the game on-hand at this year’s New York Comic Con, and I had a chance to spend some time with the curious little slime.

At its heart, Mr. Slime is classic side-scrolling action, but the game’s unique use of the Nintendo DS touch screen set it apart from the crowd. Like Kirby in Nintendo’s excellent Kirby: Canvas Curse, Mr. Slime is controlled almost entirely using the DS touch screen. But instead of poking and prodding Slimey to move forward, you’ll utilize his malleable slime body to stretch to and grab various points in the environment. Doing so allows you to move around the game world, and by tapping certain or poking and dragging, you can extend up to four arms from Slimey’s body to interact with the world.

The way it all works is not unlike Super Mario Galaxy’s “pull stars,” with which you were able to pull Mario in specific directions by aiming at specific points on the screen. With Mr. Slime, however, you’re given multiple points; so not only are you able to pull Slimey in a given direction, but connect to up to four at once, allowing you to suspend him between several points. Slimey’s hands are used for more than just traversing the game’s levels, but get your head out of the gutter. By rubbing the stylus on the screen, you can also have Slimy wave his arms to shoo away enemies and other creatures in the environment. 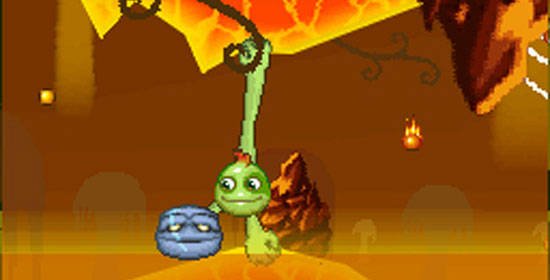 Mr. Slime doesn’t rely entirely on the game’s touch screen, however. By connecting to two points and then holding either shoulder button, you’re able to pull Slimey back like a sling shot and then fling him forward, allowing you to reach otherwise unattainable areas. The game will also take advantage of the built-in microphone on the DS, which will likely have you blowing onto your handheld, thus making you look like a weirdo in public.

Because of its similarity to elements of Super Mario Galaxy, the innovation of the control scheme was somewhat lost on me. However, having an entire game built around the “pull star” idea, and then adding multiple stretchable limbs definitely adds an unusual spin to things. Level design is going to be key in making Mr. Slime successful, and the short levels I played only hinted at what was possible, with one or two tricky areas that required a bit of thought. The game’s charming visuals, characters, and story (it’s a “young Slime’s coming of age” tale, according to the official fact sheet) should also make Mr. Slime an attractive choice for gamers looking for something new.

Mr. Slime slings onto the DS this spring.