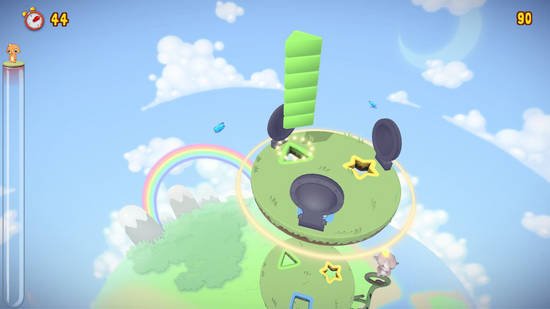 You wouldn’t have guessed it, but Spidermonk Entertainment’s upcoming Xbox LIVE Arcade title, Roogoo, was one of our favorite games of the show. And I’m not just saying that using the royal “we,” meaning that I’m talking on behalf of the rest of Team Destructoid. This time, I actually mean it. Everyone from our sports editor Samit to my wife agrees — our time with Spidermonk’s puzzler was shockingly fun, and terrifyingly addictive.

The premise of the game is so simple, it brings to mind some Fisher-Price toys you might give to a child. Players must simply guide shaped meteor blocks through a series of rotating discs, and if aligned properly, a score is awarded. It’s deceptively simple, and in the game’s early stages, it is. But as the pace picks up, making sure you’re matching up the right blocks to the correct shapes is nerve-racking, and requires some lightning-quick reflexes.

The title will be making its way to the PC as well, but hit the jump for more game details based on our hands-on at New York Comic Con. 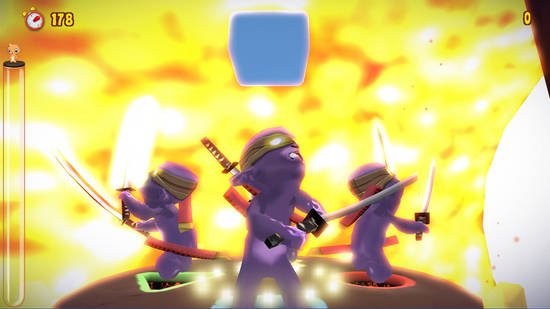 As I said before, the basis for Roogoo is rather straightforward. The game drops various colored blocks from the sky in a number of different shapes, like triangles, squares, stars, and circles. By using the left and right bumpers of the Xbox 360 controller, you rotate a series of platforms, each of which will have corresponding spaces for these falling shapes. It sounds simple – babies can take a square peg and put it into the square hole when playing with wooden blocks, so you’d think this wouldn’t be a problem. But like rubbing your belly and patting your head, it’s a bit more complicated than it sounds, and requires that you make many stressful split-second decisions. Many of my decisions, for instance, often resulted in me yelling profanities that the children watching me play the game on the floor of Comic Con shouldn’t have been hearing.

But it pains me to know that I may have been letting the Meemoos win, and in some of the more difficult levels, the malicious bastards would appear, standing on certain shape openings on platforms and making it impossible for me to drop blocks through them. By pressing the A button, it was possible to drop the shapes harder, bopping them on the head and clearing the path. It was also possible to push blocks through to lower tiers of spinning plates by using this method. This added another layer of depth and was another addition that required quick fingers, and fast thinking. 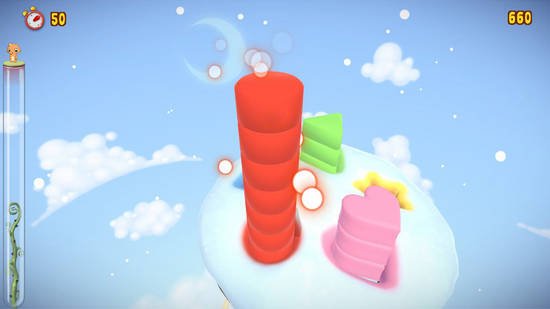 In addition to the increasingly difficult levels of the game’s story mode, Roogoo also features two multiplayer modes. The first was the multiplayer race, which was a head-to-head competitive mode. But more interesting was the cooperative party mode, which has each player controlling his or her own platform. The players must work together in order to guide the shapes, and one player making the wrong move can put the other in precarious positions, which leads to a lot of screaming and blame placing. The few games I played with my wife jeopardized our marriage, as I unintentionally dropped circles onto stars and stars onto squares on more than one occasion.

Roogoo supports the usual, including leaderboards, Xbox Live multiplayer support, and downloadable content (although what that will entail is unclear). Along with Bionic Commando Rearmed and that Street Fighter remake with the stupid long name, the polished aesthetics and addictive gameplay of Roogoo have made it one of my most anticipated XBLA games.

It’s simple and fun, so make sure it’s on your radar when it ships later this year. Unfortunately, Roogoo has no definitive release date, so the dreams I’ve started to have about falling shapes will likely continue in the foreseeable future.