At New York Comic, publisher Activision pulled back the curtain on the upcoming title, which is set to ship alongside the film of the same name this May. While the game has yet to be rated by the ESRB, let’s save them the trouble — just slap an “M” rating on this baby and ship it.

Hit the jump for details and impressions on an early Xbox 360 build of X-Men Origins: Wolverine. 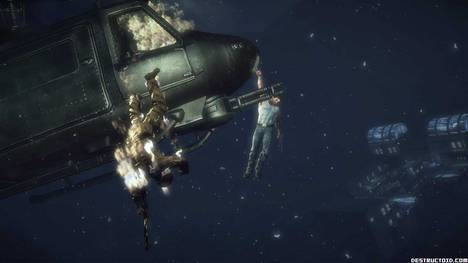 The game’s story is loosely based off of the film of the same name. By loosely we mean that Raven Software saw the movie’s script before writing their own, and while there’s some similarities, it’s clearly doing its own thing. That thing, in this case, is a blood-splattered, action-packed third-person title that may be the first game to truly do justice to the character its based on.

Gameplay is predictable, but solid. In the level we were shown — an African jungle — we tore through enemies with combinations of the X and Y buttons, slicing and dicing anything that got in the way of Wolvie’s adamantium claws. The left trigger putting Wolverine into a defensive stance, his claws crossed and covering his face; tapping it right before an enemy lands a blow will trigger a counter-attack. You can grab enemies with B, and from there toss, pummel, or perform a brutal “finishing” move.

And that’s where X-Men Origins: Wolverine gets brutal in the best ways possible. One finisher has Wolverine stabbing an enemy through the stomach with his claws on one hand, and then lifting him into the air. With his free hand, he repeatedly stabbed the enemy in the face, blood splattering in all directions, leaving stains on his white tank top.

But this kind of ultra-violence isn’t left to the finishers, as the gore is amped up Ninja Gaiden II-style by way of regular combos, too. Wolverine’s claws slide through arms and legs like a warm knife through butter, leaving a nice pile of parts. In one instance, we used a launch attack (targeting with the Right Bumper, and pouncing with the Left Bumper) to leap into a crowd of enemies. After tearing into the enemy in the center of the crowd, Wolverine burst into a spinning attack, leaving enemies on all sides with far less body parts than is natural. 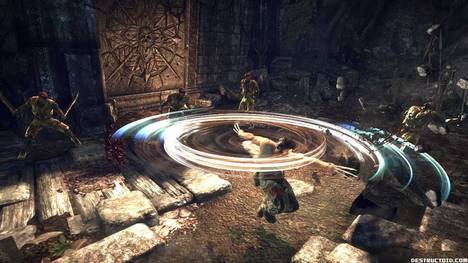 One particularly memorable sequence that never seemed to get old had Wolverine leaping onto the cockpit of a helicopter. After bashing through the glass with the attack buttons, Wolvie pulls the pilot out of his seat, raising his head up to the spinning blades above. The game pulls no punches, doesn’t cut away — you see what happens next. And it’s glorious, and it’s stuff like this that will guarantee Wolverine gets an “M rating.

If you’re the kind of person who enjoys the visceral thrills of brutal combat, a la games like Ninja Gaiden II or God of War, Wolverine speaks to you. But for those looking for a little more, Raven Software is throwing in some light platforming elements (Prince of Persia-like shimmying, for instance) and a feral sense that directs Wolverine, and makes paths and potential “puzzle” pieces glow. One “puzzle” had Wolverine finding a cog for a door mechanism, which he had to carry past a number of enemies. (Yes, you’ll have to drop the cog — so you can rip the enemies to shreds — before moving forward.)

So far, there’s nothing about X-Men Origins: Wolverine that suggest it’s going to be a game that will set a new bar for the third-person action genre, or win any awards for originality. But its familiar and tight controls, solid visuals, and decidedly “adult” take on the character seem to indicate that X-Men Origins: Wolverine is coming along nicely for its May release.