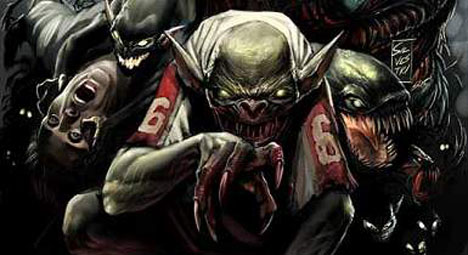 It seems Starbreeze Studios has a history of people being skeptical about their games.

Enclave? Never heard of it; sounds stupid. Chronicles of Riddick? A game taken from a movie license including the likeness of Vin Diesel; has to be lame. The Darkness? Based on a top-selling comic in which a mafia hitman gets possessed by a malevolent power; he then proceeds to rip everyone to shreds, call upon imps to help him rip everyone to shreds, and dual-wield pistols. Wait a minute — that sounds like a great idea!

But still, the skepticism is high. And despite the fact that Starbreeze’s last game (the aforementioned Chronicles of Riddick) was probably one of the best single-player first person shooter experiences of last generation, people still have their doubts. I can’t lie; so did I.

But at New York Comic Con I played The Darkness. A lot. Good news — me likes.

Single-Player
At its core The Darkness is a traditional first person shooter, and in many ways plays as such. But the game’s protagonist, Jackie Estacado, isn’t your ordinary guy. You see, on his 21st birthday, Jackie found that he was … different. In a bizarre rite of passage, Jackie is possessed with the powers of the Darkness, a malevolent power that manifests itself when in the shadows. That, of course, is where the game’s distinctive mechanics come into play.

Light and shadows play a huge role in the game — nearly every light source in the environment, from streetlights to lamps, are destructible. But, in contrast to games like Splinter Cell, which use shadows to hide the player, Jackie uses them to show himself in the form of the Darkness. Entering a hallway with a single, iridescent light bulb, I was able to shoot it out to gather the powers of the Darkness. Pushing the left bumper brought out the Darkness, and holding it down allowed me to draw power from the shadows.

At that point, depending on the level of my Darkness power (you gain new techniques and levels of power throughout the game), I was able to do a number of things. By tapping the D-pad, I was able to cycle through my various powers. The Maw Tentacles, for instance, allowed me to snake through a vent in order to retrieve an otherwise unattainable key.

Once in this mode, the camera shifts into the point of view of the tentacle, acting as a “snake cam.” I snaked through the vent, and once on the other side, I carefully approached my unsuspecting victim and performed a stealth kill with a simple push of a button. The resulting bloodbath was not only satisfying, but useful; once retracted, the Maw Tentacle was nice enough to bring the key back to Jackie.

Taking out Mafioso is a dirty job, and not one to be taken lightly; so it’s a good thing Jackie has some help. When in the form of the Darkness, finding portals will allow you to call upon the Darklings, absurd and murderous hell-spawn willing to do your bidding. Throughout the game, you’ll have the opportunity to call upon multiple Darklings, all with different abilities and personalities. In my time with the game, I saw a suicide bomber Darkling as well as a few others (there will be more than ten in the final game). Watching the Darklings in action is hilarious — if not given direction, they’ll yell at one another or do things like urinate on bodies, much like drunken frat boys.

Summoning the vicious little freaks was simple; aiming my reticle at a portal in the ground allowed me to call up a menu in which I would select my Darkling of choice. Although only one could be extracted from each portal, building an army of Darklings from multiple portals is entirely possible. At one point, I had three Darklings doing my bidding; I would direct them into a room, sit back, and watch the massacre take place. But be careful — Darklings and the light don’t mix, so be sure to shoot out lights before you send them into battle.

Other powers include using the tentacles to demolish or grab things, and summoning black holes to suck in objects and enemies. Honestly, using all of the powers took a lot of getting used to. If it all seems a bit complicated, that’s because it sort of is. Presumably, earlier levels will ramp up the usage of the individual powers, making them easier to digest as the game progresses. But even the 2K rep agreed that some things weren’t as obvious as they could be, and promised that this is something that is being worked on before the final release.

Graphically, the game is absolutely gorgeous. The Darkness runs off a (heavily) modified version of the engine used to power Chronicles of Riddick, a game that already looked next-gen last-gen. Textures and lighting truly make the game a sight to behold, but it’s the character and environment design that really stands out. Almost everything that’s been shown so far has been city environments, but don’t worry – later levels will change the game’s setting completely. Think World War I meets the Apocalypse.

The script, tied together with some solid voice acting (including actor Kirk Acevedo and Fantomas/Peeping Tom vocalist Mike Patton) promise what should be a compelling narrative experience. Many cut-scenes will use the game engine and will be interactive, allowing players to choose dialogue paths that may affect their outcome.

Multiplayer
While I don’t think the game really needs it, it’s here.

Up to 8 players can battle over Xbox Live or the PlayStation Network. Each will control a mafia member with limited Darkness powers. In my short time with the multiplayer, I was torn up over and over again by someone from the development team who was able to make full use of his minions to do awful things like tear my head off (the equivalent of a headshot when in Darkling mode).

While it could add life to the game and it seems like a solid experience, it definitely won’t (and shouldn’t) be the main draw here.

PlayStation 3 vs. Xbox 360
It should be noted that the lead SKU here for development was the Xbox 360. The first time I saw the game in action was at E3 ’06 running on an Xbox 360. Then in September and now, at NY Comic Con, there wasn’t a PS3 in sight. But it is coming, and the Xbox 360 and PlayStation 3 versions will launch simultaneously in late April or May.

According to the team, don’t expect many (if any) differences between the two versions. Both will be identical in terms of core gameplay and both will support multiplayer over their respective networks. As far as Blu-ray allowing for any additional content (in-games movies, etc.), 2K reps told me that while the opportunity is there, nothing has been decided on yet.

When the question of downloadable content came up, producer Anthony Deluca confirmed that it was definitely in the cards. I pressed him as to whether this meant meaningless, downloadable outfits for the Darklings (such as pants and cute underwear) or substantial in-game content. He laughed, saying that nothing has been planned as of yet, but things like additional multiplayer levels could be expected. He also revealed an exclusive GameStop/EB Games Darkling that wears a 2K Sports jersey and carries a baseball bat. Very cute.

When pushed about delivering content over the PlayStation Network, 2K reps weren’t as confident. Delivering content over Xbox Live is not going to be a problem, they said; Microsoft already has an existing, proven architecture in place for third parties (a demo of the game should be expected on the Marketplace in late April). But their plans for the PlayStation 3 and downloadable content were more ambiguous. It’s something they’d like to do, but they’re not sure if anything will be in place by the game’s launch.

The Darkness is scheduled to hit PlayStation 3 and Xbox 360 simultaneously this Spring.