It was surprising to see that Konami had such a sizable presence (with a prime location, across from Marvel) at New York Comic Con. Among the games displayed was Kororinpa: Marble Mania, a quirky little game in the vein of the classic Marble Madness, Monkey Ball or the more recent XBLA title, Marble Ultra Blast.

Originally published by Hudson Soft as a Japanese Wii launch title, a few things will immediately set Kororinpa apart from the rest of the over-saturated marble genre. First, it’s disgustingly cute. The build on display at NY Comic Con had me rolling around a little a penguin that was so adorable that it gave me cramps; think Animal Crossing meets Strawberry Shortcake meets The Daily Puppy. The full game will allow you to roll everything from a cat to a gas tank around the 40 plus different levels. And what’s cuter than a gas tank? 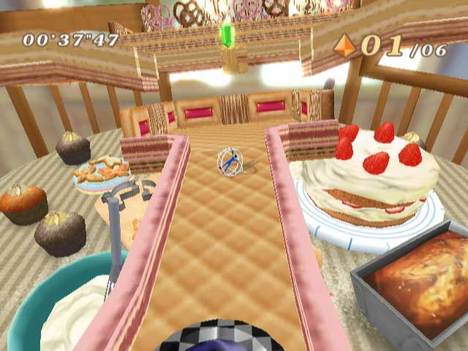 Using the Wii remote in Kororinpa is simple — tilt the Wii remote forward, backwards, or turn your wrist left and right to move the environment to roll your ball. I immediately thought I’d be in for some trouble, since similar motions didn’t translate so well for me when it came to Wario Ware: Smooth Moves. But once I got into the swing of things, what I was doing with my wrist was predictably translated on-screen. Controls didn’t seem overly sensitive and any time my penguin fell to its untimely demise, the blood was on my hands, not that of poor controls.

In the few levels I played, the environments and its hazards were varied. Scissors, magnetized rails (the penguin must be a cyborg), and the like all amounted to a challenging, yet fun experience. Whether or not a marble rolling game is going to be worth your hard earned scratch is up for debate, but if you’re a fan of carefully rolling balls through tricky, hazardous environments, this game (or an S&M bar) might hit the spot.