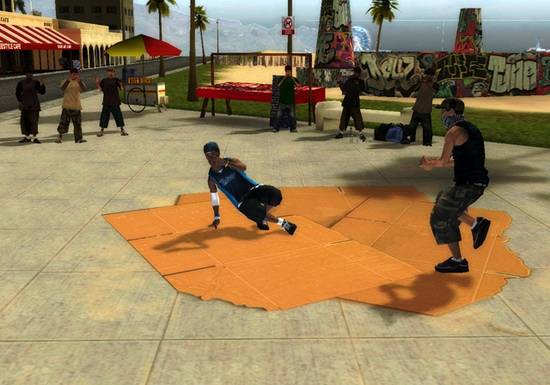 “Oh no, son! Toprock! Toprock! Kid is doing a toprock,” an excited teenager yelled at me as I played the FreeStyleGames-developed title B-Boy at SouthPeak Games’ booth at this year’s New York Comic Con.

Of course, I had no idea what the hell this kid behind me was yelling about. B-Boy, an upcoming breakdancing title set to hit the PlayStation 2 and PSP later this year, is the closest I’ve ever truly gotten to this street dance culture. Hey, I grew up on Long Island — not exactly the b-boying capital of the world. But I would soon learn, if anything, the basics — toprock, footwork, freezes, and power moves.

Focusing on all aspects of the b-boy culture and lifestyle, B-Boy‘s single-player game brings you up through the ranks as you gain street credibility among top stars like Richard “Crazy Legs” Colón and Kmel. You’ll create your own b-boy (or girl) and link different moves together in what was probably the most confusing rhythm title I’ve ever played. The animations (all mo-capped from professional breakdancers) were fluid, but I felt a bit of a disconnect between what I was pressing and what was happening on the screen. Perhaps it was the kid yelling “Oh s**t, windmill,” over and over again in my ear.

Originally published by Sony Europe and released in 2006, SouthPeak is finally bringing B-Boy to North America. The excitement around B-Boy at Comic Con in New York City — the breakdancing capital of the world — was pretty wild, and I definitely think that’s a great market for the game. For the rest of us (old people, people who have no rhythm, etc.), maybe we’ll learn a thing or two about the culture and can finally feel confident when rocking our Puma gear in public.