One of the more pleasant surprises of New York Comic Con ’09 was the appearance of a playable build of Overlord: Dark Legend. When I came upon the game, it was sitting unattended, with no one around to demo it, or no controllers to play it with. I had to sneak some controllers out in order to play the game, but since it’s in pre-alpha mode, I couldn’t even get the thing out of debug mode. I had to cry for help to Dan Robinson, Marketing Manager for the game’s developer Codemasters, in order to get the game running.

What I saw is not likely to be fully indicative of what we’ll get from the game when it’s released later this year. Still, I probably know more about how well Overlord: Dark Legend is coming along than most people on the planet, so I figured it would only be right to tell you what I know. Hit the jump for my full impressions.

For those that don’t know, Overlord: Dark Legend is a prequel to the original Overlord on the 360. Just like the original, Overlod: Dark Legend is about a stereotypical “dungeons and dragons”-style villian parading around the countryside with a horde of minions behind him. You can direct your minions to do your biding for you, as well as control the Overlord himself, all on a quest to establish yourself if the most powerful villian in the land. 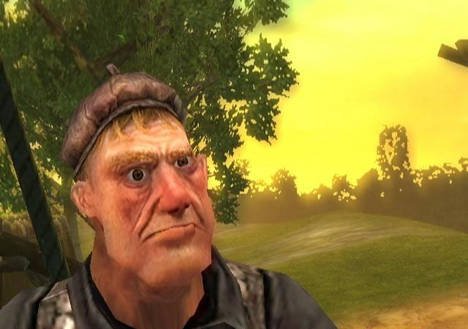 Now to dispell some rumors: Overlord: Dark Legend does not look like a 360/PS3 game. A few of the guys on the Overlord: Dark Legend team have already claimed that it’s the best looking Wii game ever, and that it looks just as good as the original Overlord on the 360, etc. Don’t believe the hype; the game doesn’t look that good. At times it looks better than The Legend of Zelda: Twilight Princess, at times it looks about the same, but at not time does the game suddenly transform the Wii into a piece of hardware that’s capable of pulling off what the 360/PS3 can do. Maybe the final build of the game will have those sorts of magical powers, but I’m not holding my breath.

Probably the coolest thing about the game’s visuals is the fish-eye lens effect on the game’s camera. Not only does it add some flair to the otherwise standard visuals , but it provides the player with a much wider view of the game’s environment. Being an action/RTS hybrid, it’s important for Overlord: Dark Legend to show you as much of your surroundings as possible. The camera also stays relatively far away from the action most of the time, which like in most Wii games, helps to keep you from seeing how ugly some of the game’s textures are. 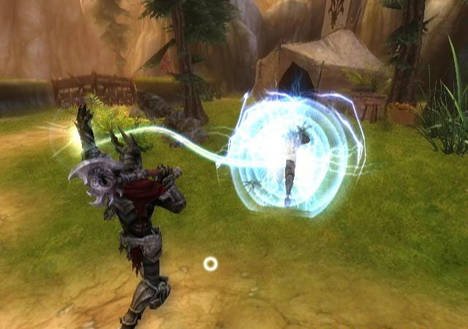 The camera does zoom in for a close up occasionally, like during a new attack where you grab one of your minions and shake them until they become explosive. This move is unique to the Wii version of the game, and requires you to first select a minion, then violently shake the nunchuck; simulating the act of strangling a midget. Shake the nunchuck for too long and you minion will die from the trauma, but shake them just enough and they’ll run from you in terror, only to explode a few seconds later. These exploding minions can be used to destroy walls or attack enemies from a distance. I’m told that this is just the first of many new features that will be exclusive to the Wii entry. 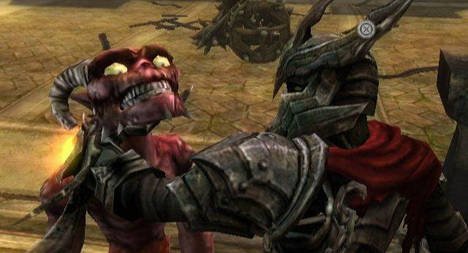 Using the pointer on the Wii remote makes it easy to quickly direct your minions. In this early build of the game, there wasn’t that much to direct them to do other than attack some sheep, a few giant beetles, and some ninjas. “Ninjas?” I asked Dan, who had yet to tell me much about the game’s storyline. “Yeah, ninjas” Dan whispered “they’re new for this version of the game as well.” He went on to tell me that the game’s script, written by “the Discworld guy’s daughter” Rhianna Prachett, was to be a lot more in the parody vein than the original game.

This time, the Overlord is sort of an “evil Cinderella”, a teenage boy who is regularly abused by his evil two brothers (who may end up being his step-brothers in the game’s still-evolving script). This abuse leads to brooding and anger; an anger that serves as the perfect motivator to start an evil army of magical killing machines. Along his quest for power, the Overlord will meet a bunch of generally loved characters from Grimm’s fairy tales, and find them to be a bunch of jerks. Little Red Riding Hood is apparently something of a two-faced bitch, and Gingerbread men are angry little fuckers who’ll see you dead before they let you take a bite out of them. 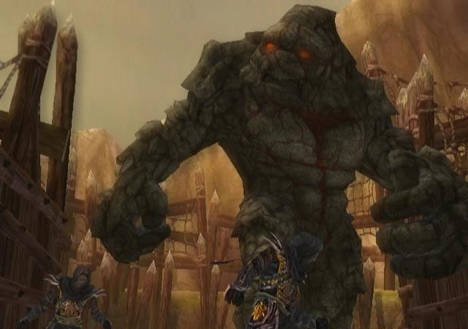 Overlord: Dark Legend was the fourth Wii game I played at the New York Comic Con that would reportedly use “laugh out loud” comedy to win over “casual and hardcore gamers alike” (the other three being House of the Dead: Overkill, MadWorld, and Ready to Rumble: Revolution.) It’s great to see comedy becoming a more dominant force in gaming, but it’s also a little scary, because nothing is more annoying than a 10-15 hour game that’s totally un-funny.

At this point, Overlord: Dark Legend could go either way on the comedy front, but when it comes to gameplay, everything is looking pretty solid. The controls are much easier and more fun to use than on the 360, the graphics look good, and the Pikmin-meets-Shrek scenario is well at home on the Wii. I’m not sold yet, but I’ve got high hopes, which is all you can ask for from a game that’s this early in development.