Maybe you’ve heard, but Activision has made a few Spider-Man games. So it’s no surprise that another is on its way, this time called Spider-Man: Web of Shadows. Officially revealed at New York Comic Con last week, the title is slated to hit consoles and handhelds later this year.

It would be easy for me to rewrite or copy and paste Activision’s press release, but instead I decided to go straight to the source to get more information on the forthcoming title. On the loud and crazy show floor of NYCC, I had a chance to sit down with Web of Shadows‘ Executive Producer, Graham Fuchs. While Activision and Fuchs are being tight-lipped about details, I did get some information on the game’s story, some new game mechanics, and more.

Hit the jump for the short but informative conversation.

Destructoid: So just tell me a little bit about Spider-Man: Web of Shadows, and the direction you’re kind of taking with it.

Graham Fuchs, Executive Producer: So New York City has been invaded — S.H.I.E.L.D. has declared martial law, and they’re downtown, trying to evacuate citizens from the island; [Luke] Cage is gathering people for a last stand in Harlem; Kingpin is in his fortress in Midtown, and he’s gathering his forces to help propel the invaders. [So] it’s up to you, as Spider-Man, to determine how you’re gonna help deal with this invasion.

So it sounds like there will be a lot of Marvel Universe characters in the game. This isn’t based on any of the films, it’s based on the fiction of the comic books?

Yeah, actually it’s based on the comic book universe; it’s not based on any particular story line or arc or anything. It’s our own original story that we’ve come up with for the game, which has been great, because it’s allowed us to bring a lot of elements we wanted to put in the game in terms of characters. You know, [we can] mix and match our own elements to sort of maximize the gameplay and make the kind of game that we want to make, so it’s great.

Is it a free, open environment?

It’s open-world; you have free reign over all of Manhattan. We’re bringing back the swing mechanic that everybody loves. We’ve completely rebuilt the city, and you know in the trailer — I don’t know if you’ve seen it — but that’s all in-game footage. It’s not a pre-rendered cut-scene or anything. So, the city’s been totally rebuilt. And there’s a brand new lighting system.

Something we really wanted to do this time was take advantage of the verticality of the city. Our combat [we’re saying] is the “most 3D ever.” You can start a fight on the ground, fight a guy all the way up the side of a building, to one of our rooftops. We’ve got a whole new wall-combat system, so really we really wanted to just blow-out the “Spider-Man-ness” of that. 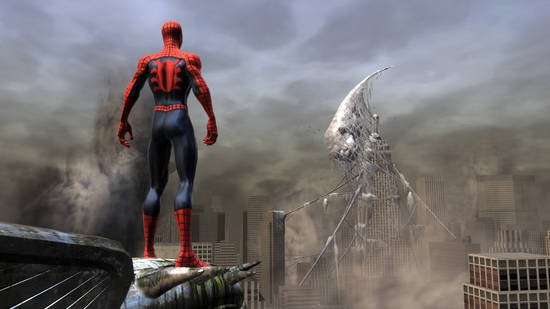 So in terms of the combat, and the Spider-Man character himself, will you be able to upgrade your abilities as you go throughout the game?

Yeah, you know a lot of it is based on how you’re fighting. What we really wanted to do is give the player a lot of control over what happens in the game, and how Spidey kind of evolves throughout the game. So the system allows for you to kind of tailor Spider-Man to your own play style. If you’re using lots of web moves, that’ll upgrade his web abilities. If you’re using a lot of hand-to-hand combat, that will improve those abilities. It really puts all of that in the player’s hands, as to how they’re going to evolve throughout the game.

Yeah, like I said, it’s up to you as to how you’re going to deal with this kind of menace in the city. If you’re being more heroic, the city is going to reflect that; when you meet the citizens, they’re going to be cheering you on, and all excited to see you. If you’ve been using the more “by any means necessary” approach, then they’re going to be a little more leery of you. And basically as you’re playing throughout the games those decisions are going to affect when you encounter all of these heroes and villains at various points.

When will you guys be shipping the game?

It’ll be shipping in the fall.

So the game will be coming to next-gen consoles, and pretty much everything you can possibly think of?

Are you talking any differences between any of the versions, like the Wii version and use of the Wii Remote for instance?

When we’re starting to do “first looks” we’ll get into all of that.

So the game is called “Web of Shadows.” What on Earth does that mean?

That’s kind of a mystery, isn’t it?

Yeah, you’re talking about it?

Yeah, you’re just gonna have to wait and see.

Be sure to check out the game’s official Web site, www.seizecontrol.com, where you’ll be able to help influence everything from the game’s development to the design. Thanks again to Graham for taking the time out to chat.