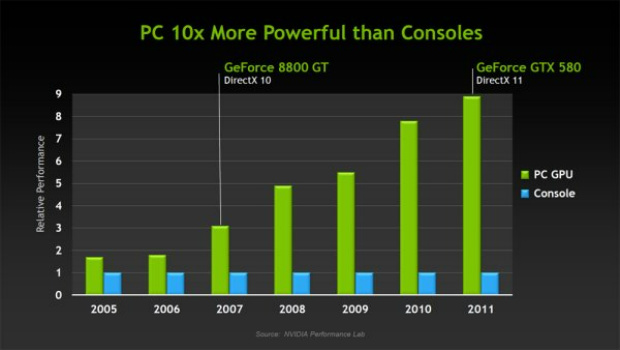 Fanning the flames of the format-wars, NVIDIA made a bold claim to Techgage about the state of the PC. You might as well throw out your consoles now, because PC games revenue will be greater than console games revenue by 2014.

While consoles are stuck with the same hardware for most of their life cycle, PC hardware is constantly improving. Digital distribution, free-to-play games and shinier graphics are all partly responsible for PC games’ increased sales in the future.

Here’s a prophetic graph NVIDIA made.

Irrefutable, right? They made a bunch.

If technology and power drives sales it does make me wonder what the hell is going on with Nintendo. The GameCube should have been the king of the consoles while it’s successor should have been shown nothing but disdain by everyone. PCs are always more powerful and flexible than consoles, you don’t have to look to the future to see that.

But it’s not about power. Sure, pretty graphics are splendid, but it’s convenience that tends to win out. I spend almost the same amount of time on my DS as I do on my PC, that’s not because they are equally powerful. It’s because I can play my DS on the train or in bed and because the games kick-ass.

I don’t think that it’s beyond the realm of possibility that PC games could start to dominate the market again and some of the reasons like digital distribution would certainly play a role in it, power won’t. PC gaming won’t get back on top with dick measuring.