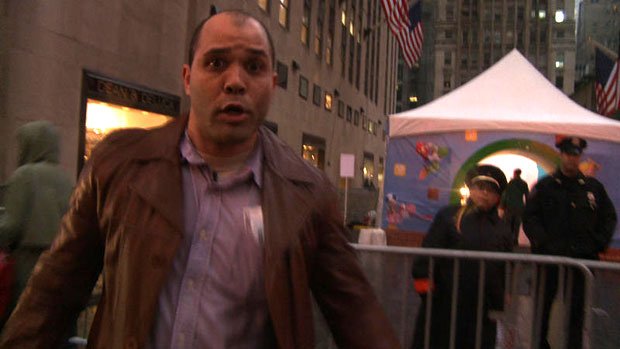 So, I took a five-hour bus ride to New York City yesterday to do some video coverage of the New Super Mario Bros. Wii launch event at the Nintendo World Store. It was supposed to be a four-hour bus ride, but somehow the good people of Fung Wah busing found a way to max out on the time. Have you ever ridden the Fung Wah before? It’s cheap as hell, but on a good day, your ride will smell like old cabbages and lonely people. On a bad day, it smells like that, plus cat poop.

Long story short, I had a great time at the event, despite feeling totally exhausted before, during, and after I got there. I planned on getting all the footage edited today, but what do you know, my dear friend and Destructoid video producer at large Andrew McCarthy erased it all.

Hit the jump for my best recollection of the highs and lows of the event, plus a rumor so awesome that I’m going to do everything that I can to force it into the realm of truth.

* Standing in line was a good time. There was a kid behind me named Kyle; I didn’t get his age, but I’d guess he was 16. I asked him if he wanted to be on video. He said, “Well, I only like Wii games, so I don’t know if you want to use me.” I told him that I like a lot of Wii games too, and he seemed pleased. Then I asked him if he heard that according to the Internet, all Wii fans are old people, little kids, and women who have children who play soccer. He told me he had heard that, but that as far as he knew, those were just unconfirmed rumors.

In front of me there was a 17-year-old girl named Alexis who told me that she loves EarthBound. She also told me that the first chapter of Mother 3 made her cry. This was the kind of girl that just didn’t exist when I was in high school. Talking to her made me feel like I was born fifteen years too early. 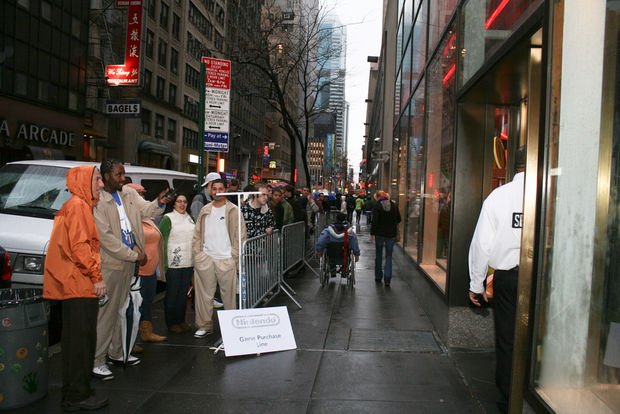 * I asked the guy running the line how many tickets he’d given away for the game (they were doing a ticket system not unlike the Wii line-up sales of 2007-2008). He said that in about an hour, 150 or so copies of the game were gone, and that he expected the remaining 100 or so to go within the next hour.

I also asked him if he noticed a lot of little kids, old people, and parents of soccer players in line. He said no. Then I asked him if there were a lot of people of “questionable sexual preference” in line, because I heard on the internet that they are also a large portion of the Wii’s audience.

This seemed to make him uncomfortable, which made me feel bad. “Maybe this gentleman is also of questionable sexual preference,” I thought to myself. To make him feel more included, I quickly threw in the fact that I get “questionable” all the time, and that there was “no shame in my game.” This seemed to make him even more uncomfortable. I believe that he then told me that it was “all good,” or something to that effect.

Then he asked me for a business card. I think he was into me.

* Once I got into the store, it was packed. It was pretty much elbow to elbow all around, and the store is pretty big. There were all sorts of animated Mario dioramas and paraphernalia. Upstairs there were three big TVs playing Super Mario Bros. 1, 2, and 3. There was a little kid in a Luigi t-shirt, who couldn’t have been older than ten, who was playing the hell out of Mario 2. He was totally loving it.

This really showed me how timeless the first three Mario games are, that this kid found Mario 2 to be so appealing despite the fact there were so many newer, shiner games on display all around him. Out of all the stuff we shot that day, that was the footage I’m probably going to miss the most. 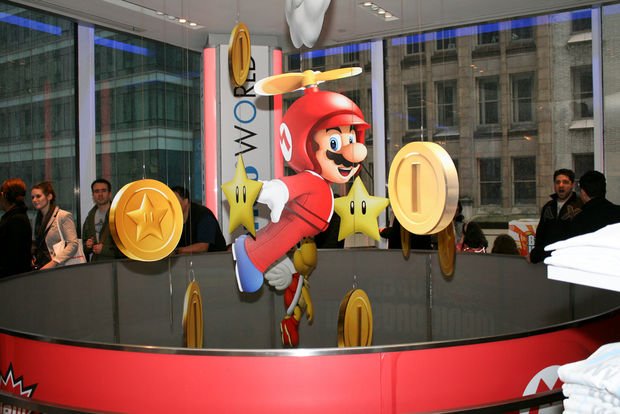 * There was a lot of cosplay going on as well. Two kids dressed like propeller Mario and Luigi really stood out. They were busy with the NSMB Wii tournament, though, so I didn’t get to talk to them much. I did get to talk to a girl named “Princess Peach” for a while, though. She was nice.

I asked her if she was going to get kidnapped again. She said “Yeah, definitely.” Then I started to get upset. I told (more like screamed at) her that I really, really didn’t want her to get kidnapped again. Totally cool and flirtatious, she said, “If I do, then you’re going to have to save me.” Then I really started screaming … stuff like “NO!” and “I CAN”T GO THROUGH THIS AGAIN!” and then she noticed she was on camera, and started to laugh.

Then she told me that she wasn’t the Princess Peach, and I walked away without saying anything.

* I asked a Nintendo rep about the tournament they were having, and he said that he didn’t really know what they were doing, but he knew that there were prizes involved. Somewhat annoyed, I then asked him what he did know. He said “a lot of stuff.”

Somehow we got on the topic of the new playable Toads in NSMB Wii, and how I wondered if they ever had names. He said that from what he’d been told, they did have nicknames amongst the NSMB Wii development team, but that they weren’t official. I retorted that from what I’d been told, Mario was originally called Jumpman, and that the Mario name was at first just a nickname based on the character’s resemblance to a janitor that worked at Nintendo. This meant that in the Mario-verse, nicknames can lead to big things.

Of course, I asked what the nicknames were. He told me to turn the camera off. Then, with an extremely serious face, he whispered in my ear, “The yellow one is called Ala-Gold, and the blue one is named Bucken-Berry.”

Now, I don’t know if this guy knows what he’s talking about or not, but I don’t care. From now on, the yellow Toad is Ala-Gold, and the blue Toad is Bucken-Berry. Case closed. 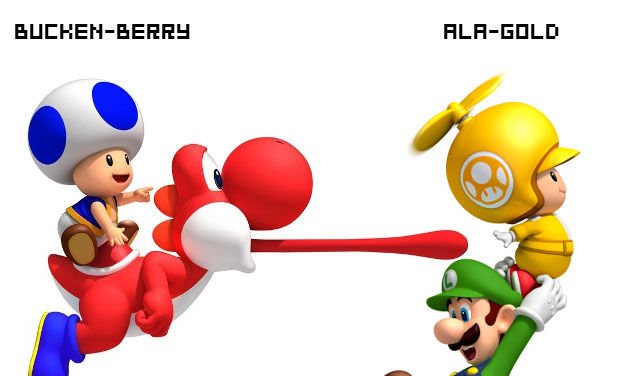 * We filmed some more stuff, like the guy in the giant Mario costume, the temporary Mario museum outside, and people playing the game. On the way out, I ran by the fifty or so people still in line while holding my copy of the game. I said something stupid and obnoxious, like, “Ha-ha, I’ve got the game now, and you still have to wait five minutes.” Someone yelled “SCREW YOU!” in an extremely angry and threatening tone.

And that’s pretty much all I can remember. I’m sure other stuff happened, but really, who am I trying to kid? I can’t bring my dead video coverage back to life just by writing about it. There is a very special kind of grief one suffers when an investment of time, money, and creative energy is suddenly destroyed with no hope of recovery.

All is not lost. The footage of my fun at the New Super Mario Bros. Wii launch party may be dead, but Ala-Gold and Bucken-Berry will live on.

Filed under... #Destructoid on assignment#Events#mario#New York City#What the hell was that?