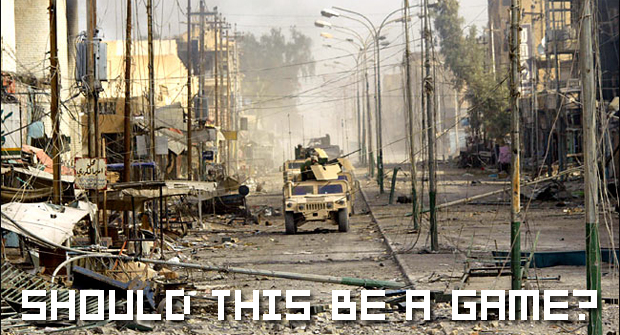 If you talk to me regularly, you probably know that I’m a big fan of NPR and listen almost every day. You should too, particularly because they’ve been seriously discussing video games more and more in the past few months. Yesterday’s episode Morning Edition had a great series of interviews with people on both sides of the Six Days in Fallujah drama, and, regardless of your position on the whole controversy, it makes for a very interesting listen.

In typical NPR fashion, they actually find people who know what they’re talking about (developers, other gamemakers, parents of dead soldiers, etc.) and there are some compelling arguments made by both groups. Additionally, it appears they actually got some hands-on time with the game, or at least got a walkthrough, so at the very least it’s worth listening to just to find out a little more information about Six Days. I also found the comments on NPR’s site to be interesting as well, both because they’re not full of trolls and idiots, and because there are people who aren’t terribly familiar with video games actually bringing up very interesting points.

While I personally don’t believe that the game should be pulled, these interviews definitely gave me a bit more insight into how difficult and traumatizing the development, and particularly the marketing, of this game can be to people who actually lost loved ones in Fallujah. If anything, no matter whether you believe the game should be published or cancelled, this piece will make you think a bit.

Does this piece make you rethink your positions at all? Where do you stand on the whole thing? Are there some things that shouldn’t be made into games simply out of respect for other people, or is this just a well-intentioned but misguided attempt at unnecessary censorship?