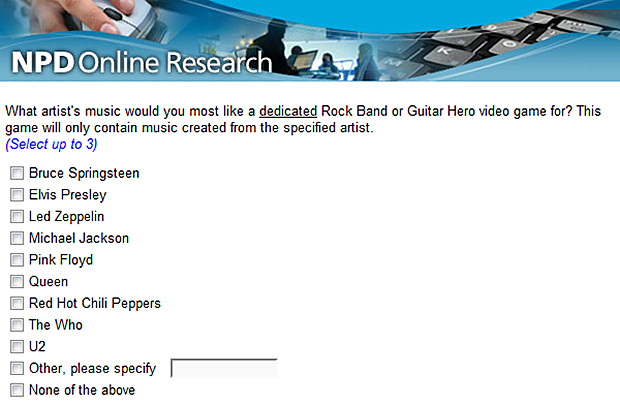 With the upcoming release of Green Day: Rock Band this June, you’d think that maybe MTV and Activision would give the single-band game thing a rest. Of course, you’d be sorely mistaken. Destructoid reader Dexter345 sent us a screencap of this NPD survey, which asks about artists that you’d like to see in their own music game. It’s worth mentioning that the Red Hot Chili Peppers are on the list of candidates, and a previous survey already mentioned them for a band-specific Guitar Hero game.

As much as I’d like for Harmonix and Neversoft to stick to DLC songs, I must admit that I’d instantly buy a music game featuring Led Zeppelin, Pink Floyd, Queen, or The Who (probably Springsteen, MJ, and the Chili Peppers, too). So maybe I’m part of the problem: put one of my favorite artists in a game, and I’ll bite. How many of you would just check the “None of the above” box?

Come on, Harmonix. Led Zeppelin: Rock Band — let’s make it happen. Please. You have no idea how much I want to try the guitar part in “Since I’ve Been Loving You” on Expert. (Not the vocals, though. I sure as hell couldn’t pull off a Robert Plant-like wail.)