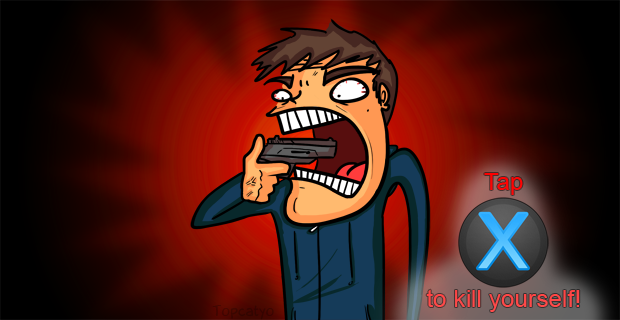 Remember the first time you played God of War (you did play it, right?) and, with the evil hydra finally at your mercy and an on-screen prompt, you pressed some buttons and totally kicked that sea creature’s ass?

Yeah, it was pretty great when God of War did that and you hadn’t played a Quick Time Event (QTE) since Shenmue. When David Jaffe’s violent love-child re-popularized QTEs, at least the game did them right. See, a Quick Time Event’s purpose is to allow for a moment of more cinematic gameplay while still keeping the player involved in the process. QTEs are useful for pulling off moments in a game a player couldn’t do himself while making them feel like they did do it themselves, the talentless hacks.

God of War and Resident Evil 4 are two games among plenty that have used QTEs well and made them a genuinely fun aspect of the gameplay. However, the list of games that failed to make QTEs fun is larger than any of Jim Sterling’s hatred for PlayStation 3 fanboys. Games like Indigo Prophecy (Fahrenheit for everyone else, though Indigo Prophecy is way more searchable on Wikipedia), Heavenly Sword, Uncharted: Drake’s Fortune, and so on and so forth. Nowadays it’s hard to come by a game that doesn’t offer Quick Time Events, and almost all the time it’s f**king annoying as hell.

So, what exactly is it about God of War and Resident Evil 4 that made the QTEs enjoyable, and what was it about Indigo Prophecy and Uncharted that made them a chore? I am not going to claim that I know for sure, but I think I might have an idea.

When engaged in a game of God of War, your reflexes are already heightened and you’ve been frantically pressing buttons now since you saw the main menu. Pressing a ton of buttons at this point is par for the course, so when a QTE pops up, it’s not a big deal and you’re ready for it. What’s more is that these events happen so frequently that you have learned their pattern and so you know when they’re coming. The QTE doesn’t screw you over and leave you feel cheated out of some health, or even make you feel like that Game Over screen you just got was a complete gyp. Simply put, the game’s already immersed you to a point where, whether you were expecting it or not, you were ready for the on-screen prompt to tell you what to hit.

Uncharted: Drake’s Fortune, on the other hand fails in this aspect in an incredibly annoying fashion. I loved the game, but occasionally it would make a halfhearted attempt at including a QTE that would only result in frustration and a severely life-impaired Nathan Drake. The problem is that, for the most part, cutscenes in Uncharted were static. You watched them and that was it. The first Quick Time Event in a cutscene came a good couple of hours into the game and the player had no idea this would occasionally happen. So, when a Quick Time Event, one of two in the game, comes up in the middle of a cutscene, suddenly you have to fumble for the controller and WHOOPS you’re dead. Fantastic. Thanks, Naughty Dog, now I need to solve that puzzle all over again.

Another key part of integrating QTEs in your game is just that. The integrating part. When God of War would use QTEs, it always began and ended with the games usual beat-em up gameplay. You would start out by beating the living hell out of one enemy. Suddenly, then, you would press the button that would initiate a Quick Time Event so Kratos could slice the guy into nice thin strips to make a sandwich. When Kratos was done with his bad guy sandwich, the player would then go back to the beat-em up button-mashing. It was cyclical. The game was abundant with Quick Time Events, but it never depended on them.

The same, unfortunately, can not be said for Indigo Prophecy (Fahrenheit). In the beginning, you would do some walking around, some exploring, and some interacting with items, and occasionally you would have to play a game of Simon Says. Okay, fine. However, as the game progressed, the gameplay became more and more reliant on games of Simon Says, where, soon, you were doing whole five-minute long segments of these to do things like have the old psychic lady help you trip out or to charge up your laser to blast the hell out of goddamn everything ever. By the end of the game, everything had been replaced by Quick Time Events. All of the gameplay had been essentially relegated to walking to the next game of Simon Says and then playing that game of Simon Says for about TEN FUCKING MINUTES. Awesome. I know you guys had to rush the end of the game, Quantic Dream, but Jesus Christ.

What’s strange is that, now, with so many games overusing and screwing up Quick Time Events, I’m starting to hate them, even when they’re used right. I’m starting to hate an element of video games because everyone has been screwing them up, but no one refuses to do them. Do developers not playtest their games? Did any of the QA guys say “Yeah, that Quick Time Event wasn’t fun, you should take it out.” It’s not like when a game has a shitty camera system. The developers could have easily taken the Quick Time Events out and replaced them with something else.

I now have an irrational hatred for Quick Time Events. Developers, you’ve ruined them for me, do you hear me? YOU RUINED THEM!

Why do game developers use this gameplay element if it ends up blowing up in their face like so many shoddy fireworks? Is it because it’s easier to just have a movie for a boss fight rather than actually create a whole new set of moves that need to be balanced and playtested to get just right? Is it because people played God of War and Resident Evil 4 and they haven’t quite figured out why those games were successful? What compels them to use Quick Time Events? Are they just easier to make?

What’s worse is that, with the advent of the Wii and other various motion-controlled ways of playing games, it seems like Quick Time Events are going to be driven even further into the ground. Although, I must admit, imagining the possibilities for Quick Time Events with Project Natal kinda gets me excited.

Regardless of what the answer is, they’ve been perfectly soiled. It’s been four years since God of War came out and video games started to use them really frequently, and I already hate them. They’ve been ruined and I think the only thing that can fix this problem is for video games to stop using them for a very long time. Just drop them altogether, act like we’ve completely forgotten what the hell a Quick Time Event is and forget that we ever had a series of on-screen prompts tell us to press unrelated buttons to watch our character do something cool. Just act like they never existed and that no one ever did them. In conversation with a friend, I’ll say “Hey, I like how Heavy Rain didn’t have Quick Time Events,” and my friend will say “What is that? Isn’t Quicktime that one movie player for computers?” and then I’ll laugh nervously and we’ll finish our donuts. I think this is the only solution that will save Quick Time Events for me.

That or the release of God of War 3.

Footnote: I have no idea if God of War really re-popularized (more like re-poopularized, am I right?) Quick Time Events. I just know that after I played God of War, every game had them.