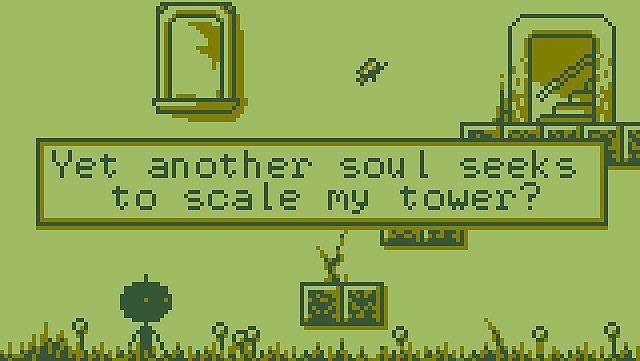 [Editor’s Note: We’re not just a (rad) news site — we also publish opinions/editorials from our community & employees like this one, though be aware it may not jive the opinions of Destructoid as a whole, or how our moms raised us. This article is part of our Monthly Musing series: this month’s theme is “nothing is sacred.” Want to post your own article in response? Publish it now on our community blogs.]

There are tons of great reasons to pay attention to Askiisoft‘s indie platformer Tower of Heaven: it’s a well-designed and tightly focused game with interesting mechanics, a charming Game Boy color palette, and an absolutely killer chiptunes soundtrack. If you haven’t played it yet, download it here—depending on your skill level, it won’t take more than a few hours to complete.

The real reason to check out Tower of Heaven, though, is that, thanks to a truly inspired rules mechanic, it proves that nothing is sacred: not game developers, not platform games, and not even God Himself.

If you’re not familiar with the game, here’s the central conceit: a nondescript protagonist named Eid is trying to climb the eponymous Tower of Heaven, but the deity at the top keeps throwing down increasingly restrictive laws. Your job is to platform your way to the top while obeying all of (we’ll call him God, for simplicity’s sake) God’s laws, lest you be immediately smitten.  Here’s the Book of Laws:

At first glance, these rules look restrictive and arbitrary—the idea of not being able to walk left is horseshit, right? Perhaps.

Tower of Heaven is certainly difficult: the rules mechanic and the level design come together to offer a pretty challenging, albeit brief, experience. Any frustration is mitigated by the game’s excellent level design and generous checkpoints. No matter how often you die—I died 156 times during my first playthrough—Tower of Heaven rarely feels unfair, and you’ll never have too much ground to make up.

After the initial shock of a new rule being imposed on you, though, Tower of Heaven plays like a traditional platformer. Basically, the rules take a backseat to solid platforming. The seamless integration of these rules is  a testament to Askiisoft’s design and to the fact that I died 156 times; by the 157 mark, you’d think I’d learn how the game works.

But, in reality, I didn’t start following these rules when I booted up Tower of Heaven for the first time—I started following them in 1991 when I first blew into my Super Mario Bros. cartridge. To be honest, Tower of Heaven‘s Book of Laws doesn’t do anything wildly inventive. It does, however, present itself so brilliantly that it will make you re-evaluate the platforming genre and the designer’s role in your experience.

To see what I mean, let’s take each of the rules in turn.

Don’t touch the sides of any blocks or platforms

More than anything else, this rule sets the tone for the rest of the game: this is a platformer, and you’re going to have to be damned precise if you want to survive. How many people have died in Mega Man because they couldn’t quite make it all the way to the next platform, only to hit the side and fall to their deaths? Both games, and the genre as a whole, demand precision: the only difference here is that there aren’t any holes to fall into—you eat a face full of lightning instead. Tower of Heaven codifies and makes explicit a set of de facto limitations that we already deal with in other games.

Even more forgiving platformers like Super Mario Brothers demand precise timing. There are a few places that allow for more wiggle room, but those situations lead to bonuses and aren’t central to the design of the level or the game as a whole. The critical path of most Super Mario games, if you strip the power-ups away, is about jumping on turtles and over holes.

And, all of a sudden, we’re back to precise timing, trying to avoid hitting the sides of platforms.

This is perhaps the most unintuitive rule that Tower of Heaven presents. You can get around it by jumping, but it’s needlessly difficult and a huge pain in the ass.

To wit, the entire genre is predicated on the idea of moving left to right. Sure, you can move backwards in most platformers, but you’re merely covering old ground. Auto-scrolling levels — the most famous of which must be level 1-4 of Super Mario Brothers 3 — are the logical extreme. Tower of Heaven cuts the fat: it would rather kill you than have you waste time.

The “Don’t walk left” law is simply a reconfiguration of the same types of limits and strictures that the sidescrolling genre has been dealing with since its inception—if it feels arbitrary and unfair because it’s a “rule” and not a design trope, you might be getting at the heart of what, I think, Tower of Heaven is trying to say.

This is the last rule that God gives you as you progress up His tower, and the effect is immediate. Until I was told not to touch them, I never noticed the grass and butterflies that populate each level. To go back to the Mario series, the extent to which the Mushroom Kingdom is inhospitable is striking—even the (Piranha) plants are trying to kill Mario.Compare that to Tower of Heaven, in which the butterflies are harmless until God says they aren’t.

If you could erase the last twenty years of  collective videogaming knowledge, would you know to jump on Goombas? Perhaps, but it’s easy to see the ways that Tower of Heaven subverts the cliché: the butterflies don’t kill you because they’re inherently evil or fall into some sort of “bad guy” role; instead, they kill you because God says they do.

At first glance, Tower of Heaven‘s set of rules seems like a failed mechanic—it doesn’t do anything new or different, and simply dances around the fact that, at its core, the game is a stereotypical sidescrolling platformer. That may be true, but I think the fact that Tower of Heaven is so traditional is one of its biggest strengths—the Book of Laws mechanic doesn’t do much with regards to gameplay, but it wraps the entire game up as a compelling thematic passage.

Jamie Obeso, writing for GamerLimit, makes a few interesting points on the subject:

Just about any news post you can find about this game has people saying things like ‘This game was waaay too hard and it pissed me off’, or ‘I liked this game, but it was too hard so I didn’t finish it’. For some people, the game is just so stifling that they don’t know what to do about it.

Tower of Heaven’s genius is that, like any game you play, there are a set of rules that must be followed, and if you fail to do so, you lose. The rules of Tower of Heaven, though, conflict so heavily with what we’ve come to expect from a video game that it can be uncomfortable or even frustrating to play. If the Book of Laws causes you to feel this way when playing the game, then it has achieved its intended goal perfectly.

Tower of Heaven is a tough game, to be sure, and it’s totally possible that Askiisoft designed it to be arbitrarily frustrating to make the point that gamers can feel frustrated when taken out of their comfort zone when it comes to videogames and “the way things are.”

But my experience was completely different. The game isn’t hard because of the Book of Laws; it’s just plain hard. Sure, the rules say that I can’t touch the sides of a platform; in any other sidescroller, that would still be true, but, like I mentioned above, it would just be an implicit, rather than explicit, “law.” When you take into account the fact that Eid never has very much ground to make up (thanks to the generous checkpoint system), I was never frustrated.

In fact, in my experience, the rules integrate so seamlessly into our ideas of how platform games work that I had to be reminded by the narrative and the structure of the game just how arbitrary they are. The Book of Laws’ strength isn’t that it adds anything new to sidescroller gameplay, but that, by giving those genre tropes and clichés a source (in this case, God), it exposes them as arbitrary and artificial. In fact, the entire game is about re-evaluating what is “sacred,” and, if need be, destroying it.

Tower of Heaven is effective because it sticks to the dogma of sidescrolling platformer design so religiously while wrapping itself in a narrative that proves itself false—at the end of the game, the tower falls, and the Book of Laws is destroyed. Everything we think we know about sidescrolling platformers is the result of years and years of iterative transmission, and there’s no reason for it to stay that way. I can’t really criticize Shigeru Miyamoto and Keiji Inafune for creating seminal games that have gone on to inform seven generations of design, but Tower of Heaven effectively argues that there’s no reason for “that’s just the way it is” to be a driving force any longer.

Given that many of the so-called “rules” of platformer design, what Tower of Heaven re-packages as its Book of Laws, are being increasingly relegated to retro or retro-revival games suggests that Tower of Heaven isn’t merely a call to arms to do away with those conservative tropes. While it does serve as a good post-mortem for the genre, its thematic implications are certainly more ambitious.

Tower of Heaven pushes the blame from the player onto a faceless deity. When the rules of the universe are as exposed as they are in the Book of Laws, when it’s so easy to pinpoint who, exactly, is killing you, it becomes imperative to change those rules. Success in most games equates to finding the most effective way to exist within a game’s implicit set of rules; success in Tower of Heaven involves killing God and doing away with them altogether.

While Tower of Heaven certainly made me re-examine the developer’s role in game experiences, it also gives an explicit source to so many of the things I take for granted about games. Taking Tower of Heaven to its logical conclusion naturally raises more questions than it provides answers: What else do I take for granted? What other types of things do I accept just because they’ve been there for a long time? What other towers need to be climbed and destroyed?