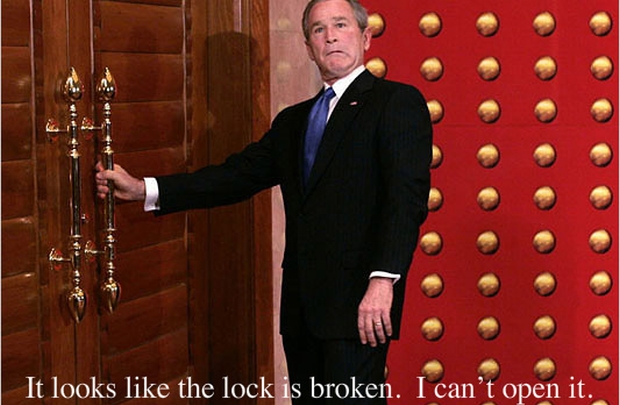 There’s a moment in Resident Evil 5 where after you’ve done physics defying acrobatics and taken on a horde of infected townsfolk (complete with their own near-invincible, chainsaw-wielding, psychopath), the game tells you that to progress further you’ll need a key to open a gate.

So that’s you, a heavily armed ex-special forces guy with muscles the size of Bournemouth, needing an average common variety key to open a rusty gate that you could easily kick down or use your partner to climb over. Last time I checked, this year is 2009 and not 1996. Then again, the last time I checked the date it turned out I missed my brother’s birthday by at least a week … but that’s not important right now. The locked door and its associated ‘busy work’ puzzles have always irritated me in games. The whole idea made sense in something like the original Alone in the Dark, which was primarily a puzzler featuring a character who wasn’t strong enough to take down a door or willing to use up precious ammunition to open one of the many rooms in the mansion from hell. When Resident Evil stole/paid homage to the series, instead of characters who were lowly private investigators, they were a pseudo-S.W.A.T. team for the local police force. There was the obligatory ‘master of unlocking’ in the team, but why wasn’t Jill ever able to use these skills on the Mansion Key doors?

However, I loved Resident Evil so much that I was willing to overlook the numerous plot holes and bad acting. It turned the traversal from a puzzle to its solution, the most mundane of game mechanics, into an unnerving and new experience. Survival horror would become one of my favourite genres ever, but many of the games associated with the tag kept to the same formula of antagonistic obstacles and the locked door puzzle. No matter how you dress it up with tangents that branch off, you’ll still find yourself coming back to that same locked door scenario. It’s always waiting around the corner in a situation which could easily be overcome by brute force; the same brute force you’ve been using to overcome your enemies.

‘It looks like the lock is broken. I can’t open it.’

Damn, if only this axe was a crowbar, then I’d get inside!

Silent Hill eventually became a parody of itself as its protagonists would collect brutal melee weapons that could easily smash in one of the many ‘broken lock’ doors they encountered. Even then, they would find the one door that could be unlocked and still have to look for the key on another floor. At one point that didn’t even make sense once Harry Mason smashed a padlock off a gate with his axe. Look at Silent Hill: The Room; the whole concept is based around a locked door! Did you know that Silent Hill: Homecoming features 133 broken doors? No, really. There’s even a video of all the doors featured floating around the internet.

You know, I’m not a fan of Dead Space since I find it to be full of boring ‘busy-work-go-here-now-there’ objectives and in-your-face horror that’s been done before, but at least the locked door puzzles were realistic. These were huge bulkheads that ran on malfunctioning technology. It wasn’t like Resident Evil 5, where the pluckiest of survival horror investigators who could survive bites, gunshots, stabbings and gooey suffocation were stopped by the odd door. Hell, even at the end of that game Chris has to punch a boulder into lava; so why not a door? Quite frankly, that insults my intelligence despite the game’s previous efforts to reduce Easter Egg Hunts for keys.

I mean what is the locked door puzzle essentially? It’s just another way to prolong a game at the end of the day. It’s not a real puzzle with a sense of accomplishment as your reward; it’s an irritating obstacle to climb over.

Sometimes, it doesn’t even take the physical form of a key or a door. Take Lost: Via Domus for example; in one episode, Elliot has to get past Jack, who guards the pathway into the jungle. Elliot has to talk to Kate and this triggers a flashback in which Elliot remembers that he can lie. So this ability to lie becomes a metaphorical key that he uses on the metaphorical door which is in the form of a person. Jack runs off and you get access to the jungle pathway.

Let me reiterate, you have to get an impassable object to move so you carry on down a specific path, even though in reality you could just walk down the beach and enter the jungle unseen. Hell, how can you forget to lie in the first place?! What kind of mentality is going on in game developers’ heads when they think that nonsense up? I sometimes wonder if the door puzzle is part of some design quota that developers have to fill in order to receive Christmas bonuses.

I’ve recently noticed that Climax to have (seemingly) dispensed with a majority of the door puzzles in Silent Hill: Shattered Memories. Now, Harry Mason barges through doors like he’s being chased by welfare officers inquiring about his late child support payments. In the mess that was Alone in the Dark 5, the one saving grace was that Edward Carnby had the ability to just trash a door with whatever was at hand to get the goods inside.

For me, it’s a step in the right direction in games, especially when we’re supposed to be emulating films to a point where not only the visuals are lifted but the themes behind them as well.

Survival horror is built on the fear of traversing the unknown and not standing around scratching your head over a newspaper conundrum. I don’t think, even with assimilated genres like action adventures, we will ever escape the locked door syndrome in a linear setting. It should have really stayed in the past and left to people who were creative with the situation, like the old LucasArts point and click adventure games or fantasy titles like Zelda (where the locked doors seal off large playing areas rather than a room with another puzzle).

I mean, it’s not like leaving out the infamous locked door puzzle will make a game shallow, right?

Now if you excuse me I need to run some errands…Crap. Do you know where the front door keys are, honey? Huh? I’ve got search the freezer and thaw out what now?!