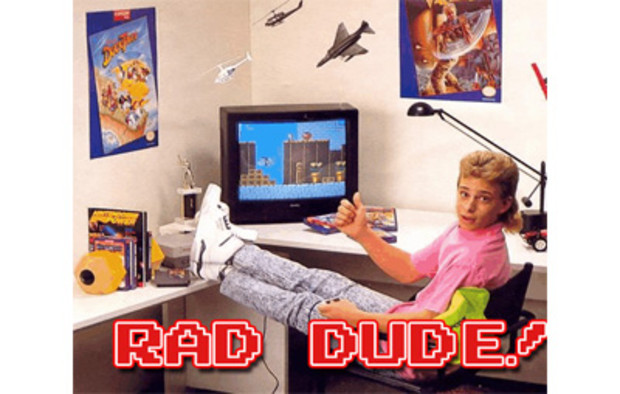 Every fragment of pop culture, whether it’s films, comic books or television, has its own good ol’ days of which grizzled veterans of the medium will bemoan the passing of on Internet forums and in late-night Denny’s. There’s always going to be a Gold, Silver, and Bronze age for everything.

The times where they fit, exactly, are up to discussion by the adoring masses. Comic nerds will put the Golden Age of comic books happening in the early 40s and ending when the Senate Subcommittee on Juvenile Delinquency began the age of censorship. Personally, I think it was the Superman Lets It All Hang Out issue that pushed ’em over the edge.

When it comes to videogames, fans put the Golden Age in the early 80s, when the arcades were packed wall to wall with high score combatants. That bearded guy from King of Kong was kicking ass and a young Cliffy B was hitting high score lists in Nintendo Power. It was a time of innocence for games where the genres had yet to be tapped or even defined. Programmers were exploring completely new methods. Like the day they decided to switch things up and program enemies to come from the left side of the screen in a straight line rather then come from the top of the screen in a straight line. It was truly the Renaissance of Gaming.

But soon the games and the gamers would fade out of cramped mall arcades into basements and living rooms. Franchises and consoles became common place and the industry became just that. An industry. This was no longer a hobby, but a bone-a-fide thing. Soon, that squat-faced kid from the Wonder Years would star in the The Wizard and mock us forever buying a power glove. From there, we would drift into the 90’s where gaming become a full-fledged commercial explosion. Genres were explored, drafted, and then later soundly murdered in a dank alley at the turn of the millennium.

You might get the idea from the way I wave a dirty finger at the evolution of gaming that I’m one of those retro nuts that still holds out for the Virtual Boy to make a comeback or rolls their eyes at anyone that mentions putting games on discs or those silly three-dimensional graphics. The modern equivalent of the bespectacled old dude wistfully dreaming of the time before movies had colors and women could vote. This isn’t me. I revel in the modern era of gaming we live in. High octane action, integrated online support, quadruple processor supercomputer consoles, open-world environments, compelling storylines with professional Hollywood-level voice actors. I eat this shit up. But something has been lost in the slow transition from Super Mario to Halo. Some small, almost undefinable quality has slipped away as we’ve upgraded the pixels and lost the midi beeps. What’s that, you ask?

Hey, after we murder these twin, duplicate, over-sized purple raptors with a rocket launcher, you wanna get some lunch?

There was a time — a beautiful, innocent time — where not even an ounce of explanation went into each seemingly arbitrary and surreal game design choice. Sure, the player should get some points for their success, but how should we award them bonus points? How about the nonsensical inclusion of giant pieces of fruit? You know what else is cool? SPACE! Where everything is glowing and it wants to kill you. What other things can we have a tiny ship shoot at? Let’s forget space. How about oversized centipedes? You got it.

It was an era where every design and concept seemed to have come tumbling out of the ramblings of an insane meth-addict that wandered into videogame company. Small mustachioed plumbers scaled hovering stacks of rafter beams to defeat a wooden barrel-chucking ape. Zombies ate neighbors, Digs where getting Dug, and the Poles were getting put in Position.

This was a time where evil villains didn’t build terrorist plots, but instead built giant robotic mecha-rabbits that shot laser beams from their eyes shaped like carrots. Or massive tentacle space monsters. Or cycloptic yellow rock beasts. Enemies didn’t need to be counter-intelligence squads or simple shambling undead like they do now. Oh no, it was the time where bullets are the size of cars and have inexplicably grown arms and faces. A land where guns can shoot three ways at the same time and where tiny men in white jumpsuits inflate ground-dwelling dinosaur-lizard hybrids with bicycle pumps. A magical place where even the simple job of delivering morning newspapers in a suburban neighborhood could get you eviscerated by a ninja or killed by a miniature tornado.

Games now have moved from the technicolor LSD shit-storm to meticulously calculated, scene-setting narratives with deep character detailing. Blockbuster titles like GTA IV and Call of Duty have moved away from hurling super missiles at hovering galactic squid beasts and into this realm of hyper-cinematic, super-realistic explorations plagued with noir and drama.

This is certainly not a transition to bemoan, there’s a new level of intimacy with characters in modern games. Players find themselves attached to characters plights, like Niko Belic’s soul-searching journey to fill holes in his past. Or Sam Fisher’s slow progression into mistrust with the agency he works for and the way the lines between enemy and ally are blurred. These explorations of the genres are excellent examples of games moving towards art, for sure. But something is missing. There’s a void in these overly-crafted sculptures chronicles.

So we can keep enjoying our beloved interactive crime dramas, but don’t you forget your days where freaky, egg-shaped scientists kidnap woodland creatures to blackmail discolored hedgehogs into obtaining mystical gemstones to power an orbital weaponized space station.