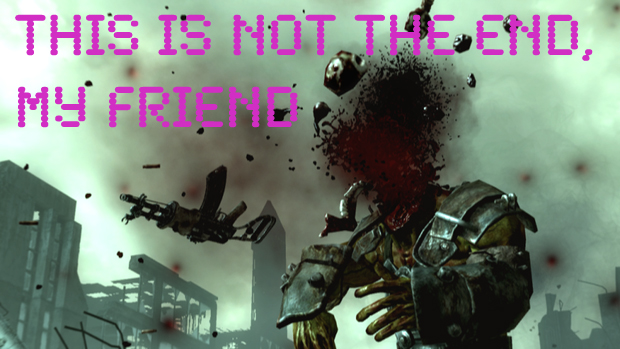 For years, the gaming industry considered itself the inferior, slightly retarded half-brother of the film industry and fought for validation for everything from musical scores to visuals, cut-scenes and yes, of course, stories. We’re so used to traditional storytelling, in which we’re given a beginning, middle, and an end, that to venture far from this millennia-old method seems nothing short of a bastardization of the entire concept of storytelling, or, on a more practical level, failing the user who can’t seem to follow anything without a distinct line from points A to B to C, level up, boss battle, missions a la carte, and THE END — PWNED.

But videogames, from the programmers who create them to the users that consume them, have finally diverted from the typical conventions of the big, bad film industry to develop into their own medium, their own glorified art form that basks in deserved praise of player immersion and technological innovation. Why, then, do we still cling so desperately to the tried, true, yet tired course of linear storytelling? Yes, it provides the structure of a game — a path for both designer and gamer to follow. Yes, reaching a conclusion provide one would hope — some manner of catharsis that makes the previous hours battling of one’s way to the credits feel worthwhile. But let’s grow the f**k up, shall we?

At risk of losing any reader that has stuck with me thus far, I refer to a classic of Western literature, the oft-named father of modern Realism, Gustave Flaubert’s Madame Bovary. Flaubert insisted he had written a novel “about nothing.” This does not say that the novel has no content, for indeed text drips from each page in a drunken stupor of eloquent profundity, nor is it saying that nothing happens within the novel itself, but indeed, within the pages of Madame Bovary there is no plot as such. There are characters. Things happen to these characters. The things that happen to them have results and consequences that lead to an inevitable end of the novel, just as one’s life ultimately ends in the culmination of one’s experiences. The “novel about nothing,” therefore, refers to the idea that the story is not what one expects of a story, especially in that time and age. It is plotless as there is no aim, no fundamental goal or problem that must be solved in order to reach a conclusion. It is simply about people, about life, about nothing so spectacular as the human condition itself, and how each of us falls prey to its variously lackluster faults and abuses, leaving most bereft at having stumbled in a ditch during a thunderstorm, our souls muddied by the very decision to walk on that particular day rather than accept a ride.

Am I suggesting that videogames fashion themselves on this “about nothing” model? Yes and no. Videogames are entirely unique in their capacity to involve the player not just in the action provided by the game’s designers, but in that they offer players the opportunity to affect the world in which they are playing; the environment, its other inhabitants, the course of the story itself. What does this level of immersion mimic? Life. While many people have an entitled perspective that they are stars of their respective stages, the reality is that each of us exists in this world with a bunch of other co-inhabitants. Events and intentions are in full swing from the moment we take our first breath, and we navigate the storm of activity with varying levels of interest and influence along the way.

And since life as we know it is more and more immersed in the digital and dependent on the map rather than the terrain, a transition from living-as-oneself to living-as-other in the form of a game is not only natural in its progression, but well on the way to maturity, perhaps in its adolescence, where the game continues to grapple with the birds-n-bees concept of linear storytelling, all the while knowing there are other ways of doing “it.”

Two games of contrasting approaches immediately come to mind at the moment. Batman: Arkham Asylum and Fallout 3. I love both. My only complaint about Batman, in fact, is that the story did not last longer. If I must follow a quite scripted mode of gameplay, this is the fashion in which I wish to do so. Events link inextricably from one to the next, leading the player along a path that feels natural and, indeed, vital — not just to the story, but to one’s very survival. There were moments when I felt somewhat bullied by the nature of the linear, but for the most part, I suspended my disbelief with joy and allowed myself exploration of Arkham Island when, indeed, I felt a needed diversion from the course of events.

Fallout 3, on the other hand — while a story is built into the game in a rather traditional fashion (one is presented with a problem to which one must follow certain paths to reach its solution) — following the story is not required in order to play the game, nor to thoroughly enjoy it. This is a distinct difference that is seldom found in open world games, “open world” though they claim to be. While I spent many an hour traversing the streets of Empire City to hunt down each and every blast shard in inFamous, once I concluded the story and found every shard, there was little left for me to gain in exploring the terrain. In Fallout, however, I seem to spend the majority of my time exploring, finding every single Raider outpost on (and off) the map to revisit after the requisite amount of time has passed to hit it again for additional carnage and munitions.

Fallout, and other similar open world RPGs, benefit, I believe, on the character build system. inFamous, [Prototype], and other open world stories lose some of their power in that the player is required to play a specific individual with specific, pre-loaded personalities that are inherently constraining. I am not even terribly interested in completing the story built into Fallout as much as I enjoy creating different characters with differing motivations and skillsets, then setting them loose in the Wasteland to see what happens.

By stark contrast, perhaps the most bullied I’ve felt by a game to date was the recent incarnation of Ghostbusters, where not only was the player character decidedly uninteresting, undynamic, and utterly pointless, but unless one followed the scripted scenarios immediately and to the precise specifications ordered by the game, there was no play to be had. Not only were you unable to explore the environment whatsoever, but if you decided to go to this room instead of that, or say you wanted to approach a problem from another perspective, the other characters were there to constantly berate you for your fuck-upery. I’ve never encountered a game so insistent that the player follow each prolonged mission in such a precise order of action, to the point where watching a friend partake in one part left absolutely no desire in me to take it on myself. “What’s the point? I know what happens.” This is worse than most films, in that I often watch a movie again even after I know how it unfolds. When my participation in a space is reduced to little more than a formality, I may as well be standing amidst a throng of sweaty tourists trying to catch a glimpse of the fake “Mona Lisa” encased in bulletproof Plexiglas instead of exploring the labyrinth of the Louvre for an actual encounter with history. Buy me a freakin’ postcard.

Still, with the upcoming flux of open world RPGs (Dragon Age: Origins) and long, sprawling stories with various outcomes and character possibilities (Heavy Rain), I see videogames taking a more non-linear approach to storytelling that maximizes player immersion and reduces the emphasis on traditional story: beginning, middle, end. Games have their peculiar and remarkable technical qualifiers that set them as media in their own right, flashes of brilliance that have markets such as the film industry playing role reversal and turning to games for innovation and economy.

But it is the game’s ability to create new conceptualizations of story in which lies its true potential for departure from standardized entertainment. This is what will birth the most meaningful and lasting stretch of development for designer and player alike, both in the sprawling pathways of the game and in the unfamiliar terrain of the future. “The End” belongs to history. The course of continuous and unlimited play paved by users concocting stories of their own within given environs — with this Plato’s cave is awash in the light of XMBs and LEDs, plasma forms and digital ideals.