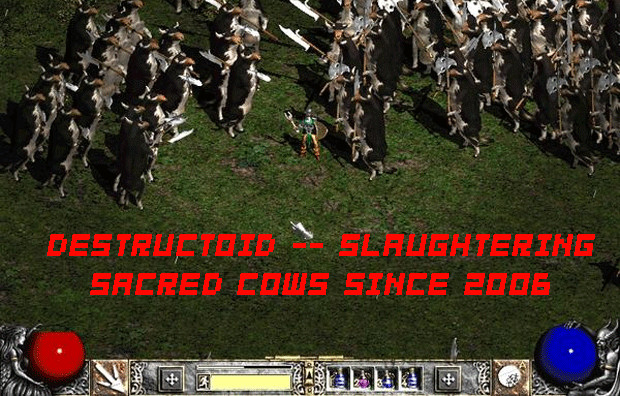 Mission variety. It is an essential component of what keeps most games engaging. Keeping gameplay fresh and exciting is a baseline expectation that drives developers to continually imagine and implement new ways for the player to interact with the game world. The only problem is that many times they don’t.

I’m not entirely unsympathetic. Faced with a task like “come up with 50/70/100+ side quests or levels”, I can see how it would be very easy to get halfway in and run out of inspiration. The temptation at that point is very clear — either create slightly altered duplicates of the mission types you already have or go back to mission types that have been used before by other games, even if they weren’t successfully implemented.

The sacred cow we’re butchering today has a venerable tradition of fail in level/mission design for many years. I speak of games that take superheroes and secret agents and turn them into wet-nurses. I speak of games that ask a player to become a kindergarten teacher — giving them the equivalent in gameplay of shepherding rambunctious cherubs with ADHD through a Toys ‘R Us with candy spilled on every aisle. I speak, of course, of escort missions.

Conceptually speaking, the escort mission does seem like an excellent idea. From a narrative standpoint, it makes perfect sense. Most games put the player in the shoes of a hero, and what does a hero do? They save people.

The formula of Mario and Link travelling through countless dangers and enemies to a fixed endpoint to rescue their loved ones is both worthy and compelling, but it has gotten stale over time. The idea of an escort mission adds an additional level of drama and tension to the equation. Not only must the protagonist stay alive and defeat their foes, but they must also ensure that the object of their protectorship remains safe as well. The concept of defending your charge in real-time provides immediacy of concern that forces the player to take their actions more seriously.

Escort missions also are theoretically sound from a gameplay perspective. Once a player has mastered the mechanics of a game and the difficulty is reduced, having to provide for the safety of a follower is an excellent way to change the way a player approaches combat. They are usually forced to take a slower pace, abandoning the run-n-gun mentality they may have previously employed.

Escort missions force players to think about who they target and when. They push players to avoid explosive or area-of-effect damage that could go awry and kill an escortee in closed quarters. They ask a player to step up and take damage intended for the escortee at times. They provide additional levels of difficulty and layers of strategic concern.

So why, if escort missions are so conceptually sound, do they end up so irritatingly pathetic when we actually play through them?

Playing as a bodyguard is more painful than watching The Bodyguard.

The reasons escort missions fail in practice are legion, my friends. In the interests of brevity, however, we’ll confine our exploration to a few important elements.

Let’s start with the woeful state of AI present in escort missions. What is it about escortee programming that makes them all behave like paint huffers in need of a fix? These NPCs simply aren’t equipped with a sense of self-preservation.

The appearance of an enemy or the eruption of gunfire should be an automatic trigger for the escortee to make a beeline for the nearest cover. This is realistic and would force the player to take the NPC’s hiding place into strategic consideration. Instead, they just stand in the line of fire like Robert Duvall in Apocalypse Now.

Collision detection and pathfinding are another major issue with the AI. Nothing breaks the immersion (yeah, I used the ‘I’ word, what are you gonna do about it?) of an otherwise tense and satisfying escort mission than to realize you’ve left your NPC behind. Especially when you turn around to see the nimrod running full bore at a wall or a piece of furniture.

It’s enough to make the player question their desire to save someone, when they can’t navigate the environment without the player screaming “POLO!” every 5 seconds.

Dead Rising, you know I love you, right? We really need to talk about your sequel.

Speaking of the desire to save a NPC, here’s the other failure of 95% of all escort missions : the developers are mostly unable to make us genuinely care for any of the people we’re supposed to be risking life and limb for.

Escortee dialogue is poorly written and poorly acted — based on stereotypes and caricature, or simply so thinly characterized that it is impossible to to feel any kind of genuine empathy for them. When you care in some way about the person, failing at an escort mission gives you additional drive to go back and get it right for their sake. When there is no emotional investment in the character you’re trying to save, a failure results only in frustration.

In terms of the story, we are also given very poor reasons for attempting to save these unfortunately impaired souls in the first place. In the majority of cases, we need the character in question to open a door, create an item, or provide a vital piece of information.

If that’s the only purpose of the individual, then an escort mission simply isn’t the proper means of pushing the story forward. Simple suggestion : If the NPC in effect only acts as a door key, then why not just make an item fetch mission instead and save us all the aggravation and broken controllers?

This escort is more likable, and gets better mileage.

For those developers that just can’t bring themselves to slaughter this particular sacred cow, here are a few suggestions to make your escort missions a little less wrinkle-inducing.

Consider adding in more responsive/intuitive controls to let the player determine when a NPC should follow, stay, and take cover. I have enjoyed a few of the escort missions I’ve played where I had to lead the escortee by hand and then drop them off where I wanted them to stay.

Two words — more checkpoints. There’s simply no excuse for making a player redo a huge chunk of gameplay because luck was a factor due to AI unpredictability or ineptitude. Infamous did an excellent job of this during the bus escort mission — Sucker Punch knew that there was no way to tighten up the gameplay enough to take the element of that random shot landing at the last second out of the equation.

In conclusion : whether the failings of escort missions lie in the realm of technological limitation or developer implementation is a matter still up for debate. I’ll admit that tech limits probably do play a factor, but there is sufficient evidence to support the position that those are a relatively small slice of the blame pie.

It’s my personal belief that if Alyx Vance can be crafted lovingly enough to genuinely care about and designed competently enough to act as MY escort through large portions of a game, then there’s no excuse for creating unlikable NPCs that can’t even manage to master the 5 ‘D’s of dodgeball for a single mission. Do it right, or leave it out.