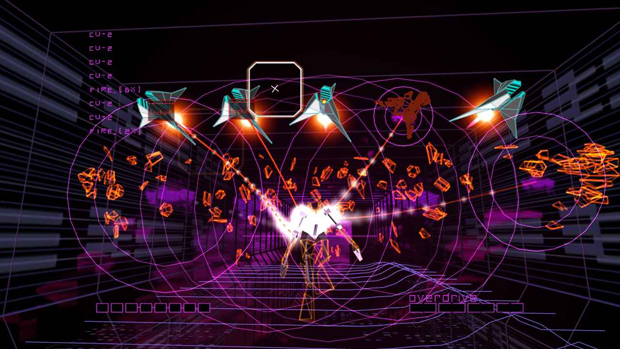 ‘The journey will begin anew’

On the rare occasion I use my Xbox 360, I’m amazed the thing still works. It’s laughably slow to boot up, full of games as it is, and having gone through several broken systems last generation, there’s a lingering fear that this could be it: the last time I see the dashboard pop up.

I hope that day never arrives, if for no other reason than my stupidly big Xbox Live Arcade library. So much junk, but also so many gems, Rez HD among them. Recent talk of designer Tetsuya Mizuguchi’s mobile puzzle RPG 18 pushed me into revisiting his influential on-rails music game.

I didn’t discover Rez until after Sega had existed the console business, but even as a latecomer I was quick to fall in love with its hypnotic style and songs. The abstract visuals hold up well, and in high definition on Xbox 360, they have become timeless. Similarly, it’s hard to imagine the electronic soundtrack ever losing its appeal. The way the two intertwine is magical. Say “Fear is the mind killer” to a Rez fan, and they’ll be transported to its fifth and final area, a stark, unfamiliar, low-key place that slowly springs to life and culminates in a gauntlet of memorable boss fights.

Rez is a remarkable, refined game that can and should be completed in a single sitting (although your hand may hurt once the credits roll). It’s not something I would want to risk burning out on, but as an every-so-often game with few contemporaries, it’s just sublime. 2016 is gonna be great.