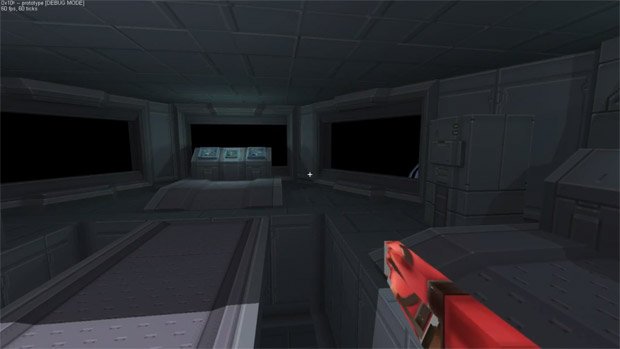 Plus another very early look at the game

Mojang’s 0x10c has the potential to be staggeringly neat, but as you can see from this video demonstration of the game’s art, there’s still a long way to go. PC Gamer caught up with designer Markus “Notch” Persson to chat about where the team is headed.

“The goal is to have it feel a bit like Firefly,” he told the outlet. “You can try to land on a planet but you mess up and, instead of having the ship just explode like it would in real life, the landing gear gets broken. Then you have to try to fix that by finding resources. Instead of the adventure being flying from here to here, it’s: I set the destination, oh god I hit a small asteroid and the cloaking device broke. I think they really nailed that kind of emergent aspect in FTL.”

Currently, multiplayer functionality has not yet been implemented. “With Minecraft I waited too long to add multiplayer, so that was a huge hassle. So now, as soon as it’s fun, I’m going to do the multiplayer. But nothing in the game is fun right now. I need to figure out what is actually a fun game mechanic in all of this.”

Tobias Möllstam, who is also working on the game, said “We don’t know where 0x10c is really headed. We’ve built a lot of hype around it — now we need to take a step backwards and not raise too many people’s expectations.”

There was one other quote from Möllstam that jumped out at me. You really ought to read the full article, but I don’t want you to miss this, either:

“I like hearing fans hypothesizing about what will be in the game. I think I read someone saying, ‘I want to have a station with automated turrets that identify incoming ships, and if they’re not identified they’ll warn them and then shoot at them, fully automatically.’ And that sounded fun — it wasn’t so much that we should take that idea, as that we should make a game so people can do stuff like that. Because with Minecraft it’s been really rewarding to create that sort of environment.”

If 0x10c can be fun on a more micro scale and offer the kind of empowerment described in the fan’s example, it should be, again, incredibly neat.