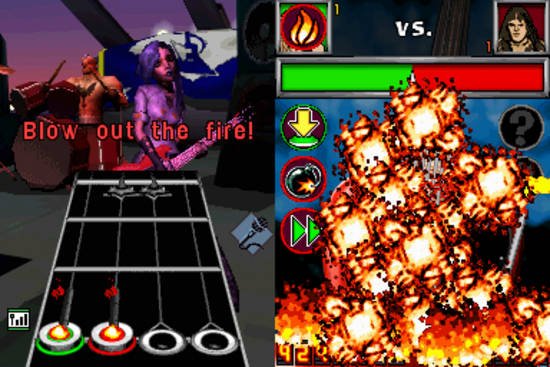 Today, Activision has released a batch of new screens for Guitar Hero: On Tour, their Nintendo DS version of their money-printing music game. There’s been plenty of hullabaloo surrounding the fret board peripheral that the game ships with, but it’s good to see from these screens that the game looks like its bigger console brothers.

You can also see that some of the more “videogame-y” aspects of Guitar Hero III are back. Boss battles seem to be present, and it looks like the developers are taking advantage of more than just the Nintendo DS touch screen. In one screen, you can see that you have to extinguish a fire by blowing into the DS microphone. The lack of the orange button doesn’t bode well for difficulty, but these little extras — along with a liberal use of tricky hammer-ons and pull-offs — could pose a bit of a challenge for veterans.

While not playable, Activision did offer a demonstration of Guitar Hero: On Tour at Nintendo’s media summit last week in San Francisco. Seeing as how Destructoid was not invited (thanks, Nintendo!), I can’t really offer up anything in terms of impressions. But just about every other videogame outlet was in attendance, so let us know if you read anything particular interesting somewhere else!

Guitar Hero: On Tour will be available this July.

[Update: Seconds after I posted this, Flynn over at GayGamer just posted up some impressions and information on the game from the Nintendo Media Summit. Check it out!]