Raskulls is a game that Destructoid has been covering since it was little more than a name and a piece of concept art. The art style was instantly endearing and we had a feeling that Australian studio Halfbrick had the potential to create a winner.

In the time since Raskulls‘ announcement, Halfbrick has become a major player in the mobile gaming market with hits like Fruit Ninja and Monster Dash. Now, if the critics are to be believed, Raskulls is on the road to becoming a hit on Xbox Live Arcade.

Unfortunately, due to the appearance of Mr. Destructoid as an unlockable character, we cannot write an official review. We can, however, big up the game anyway. So we’re doing that. 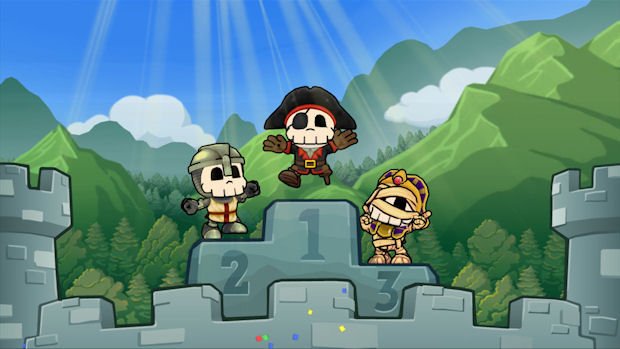 Raskulls is a 2D platform racing game with a Mr. Driller block-breaking mechanic. It’s hard to further describe Raskulls, since that particular summary pretty much says it all. You take your chosen Raskull to the finish line, utilizing power-ups and speed boosts, and occasionally screwing over your opponents. If your idea of fun is trolling your friends in the cutest way imaginable, Raskulls is the game for you.

Each map is very well designed around the central gimmick of breaking blocks to create paths and beat the competition. Various power-ups give you the ability to become a fireball and effortlessly crash through blocks, or increase the range of your block zapping wand to cover more ground. It’s surprisingly tricky to nab the power-ups (rendered as presents) while also racing through blocks, so keeping a keen eye on the whole screen is key to victory.

As well as presents, the Raskulls are also powered by a “Frenzy” meter. This meter is filled by collecting jars, zapping blocks, or running through glowing areas of the map. When activated, Frenzy increases the player’s speed and zapping ability, and you’ll find it essential in competitive matches. 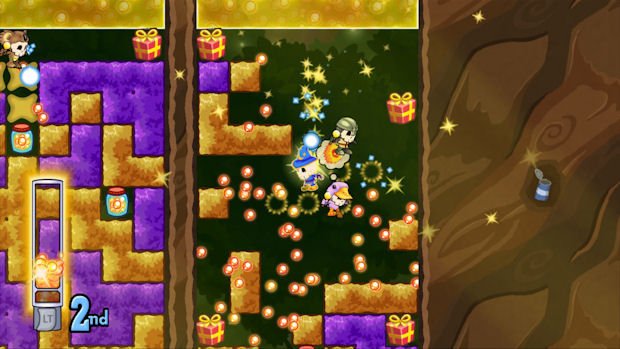 The game features a robust single-player campaign that tells a rather charming story about the theft of a “Shiny Stone” in the Raskulls kingdom. The narrative is rather funny, with plenty of silly humor and eccentric characters, and Halfbrick attempts a measure of gameplay variety with challenge and puzzle stages. Such puzzles include making your way to the goal while only using a limited number of zaps, or reaching the end without letting the Frenzy meter run out.

The game is at its best when it sticks to its core racing setup, and unfortunately there’s not a huge deal of that to be found in the story mode. So many of the stages are puzzles or challenges which, while diverse, become increasingly annoying and/or boring as the game progresses. The game shines when it’s a frantic, button-mashing racing game, not so much when it’s a slow paced puzzle game. Unfortunately, some of the more exasperating stages must be played in order to unlock multiplayer characters.

Speaking of multiplayer, this is what Raskulls was intended for, and it works very well indeed. In fact, Raskulls is one of the most intense multiplayer experiences you could hope to find on Xbox Live. Every race seems to be a close-run thing, with players more often than not winning by a nose. The use of power-ups adds an extra element of trolling to the proceedings, and the potential for much shouting, controller-throwing and claims of cheating is high. 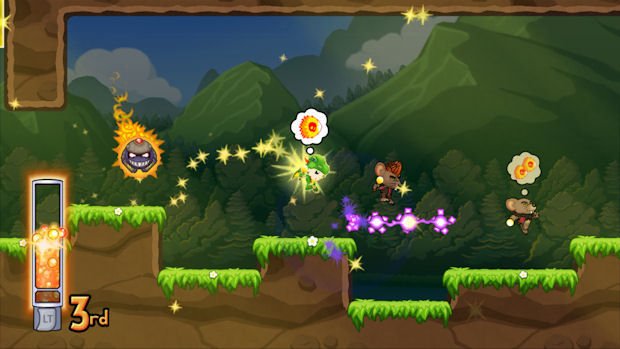 It’s surprising just how stressful a cute, 2D platforming racer can be, especially since it’s not even that fast a game. Yet somehow, this is a frantic experience where good timing, quick wits and more than a little luck conspire to determine who wins and loses. It’s exactly the kind of game that Xbox Live Arcade was made for, and one that you’ll have a lot of fun with, provided you have plenty of friends.

It’s also worth noting that the game looks terrific. The bold lines and colors of the characters makes their endearing designs stand out, and everything is incredibly bright and cheerful. There’s some really good music in there too, though nothing that you’ll be humming a year from now.

Raskulls is a damn fine experience, and definitely worth checking out. The single-player experience tries its hand at diversity for the sake of diversity, and it’s a very hit-and-miss affair, but the multiplayer provides enough entertainment to keep you amused for a good long while. It’s not a game that you can play solidly for hours on end, but more of a “dip in, dip out” affair, perfectly suited to squeezing in a race or two before doing something else. Seen in that light, Raskulls is a fun game with plenty of offer.