I’m not going to review Metro 2033. I haven’t made it past the third chapter of the game, and I doubt I’ll ever make it any further.

It’s not that Metro 2033 is irredeemably awful, or anything. It’s got some good points, which I’ll get into after the jump. But there was a moment when I was playing — a sudden, awful, awe-inspiring moment — when I realized I would no longer be able to tolerate the game any longer, and would be incapable of writing a proper review.

You can hit the jump for my incomplete thoughts on the game, but don’t go looking for a numerical score. You won’t find one. 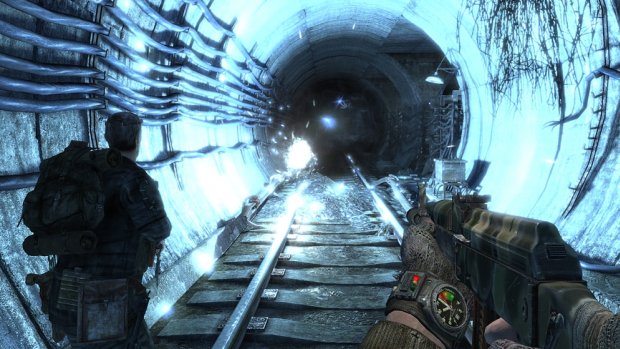 First of all, Metro 2033 is damned immersive. Every section of the game that doesn’t involve blasting mutants or bandits is filled with life and detail. Each of the non-combat segments that occasionally break up the action take place in believable, meticulously designed shantytowns full of surprisingly talkative survivors. You could easily spend an hour just sitting around, listening to the survivors talking about their lives (or what’s left of them), without even worrying about the main plot or the missions. STALKER tried to draw players into its world with its nonlinear gameplay and huge world map. Metro 2033, conversely, tries to pack as many varied and scripted bits of story and dialogue into its linear campaign as humanly possible.

Then again, I have to apologize for comparing STALKER and Metro 2033. Yeah, both games are about Russian dudes surviving after a nuclear meltdown, but mechanically they couldn’t be more dissimilar. Where STALKER was a nonlinear sandbox shooter, Metro 2033 is a linear FPS with some very, very light RPG elements.

Still, both games touch on a much beloved theme of postapocalyptic fiction: the hero’s need to survive on disturbingly limited resources. In Metro 2033, you’ve only got one form of currency: bullets. You can trade high-quality ammo for items and upgraded weapons, which, in theory, could lead to some really interesting dilemmas. Given how rare these bullets are, should I hang onto them and keep my shitty starting weapons, or just splurge now and pray that I’ll find more later on? Since these high-quality bullets do way more damage than normal ones, should I consider actually firing them at some of the tougher enemies, even if it means I’ll basically be firing away all of my cash reserves? 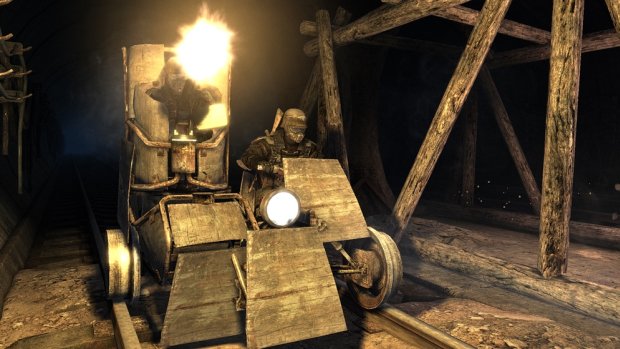 Maybe the currency system results in some really difficult, tense, game-changing decisions later on. I don’t know, and I never will.

I loved the atmopshere and the currency system but, as I mentioned before the jump, there was one moment in the game when I realized that I would never, ever be able to bring myself to play it for another second. Let me set the scene.

It’s dark, and my flashlight is off. The game has told me that enemies can’t see me in the dark so long as they’re not looking at me, so I decide to sneak up on a bandit. He’s a scout, and I can see his bandit friends behind him. I’m gonna shoot him in the back of the head with a shotgun, which will alert his friends, but hey — at least he’ll be dead, and then I can think about flanking them and opening up with my inaccurate SMG from close-range.

I sneaked up. Pointed my gun at his head. Fired four times, from point-blank range.

He turned around and killed me in three shots.

I have no essential problem with really difficult games. Really, I don’t. So long as the game is giving me something compelling in exchange for my trouble, so long as I’m gaining a greater understanding of a game’s mechanics through my constant failure and loss, then I’ll do whatever it takes to rise to the challenge. 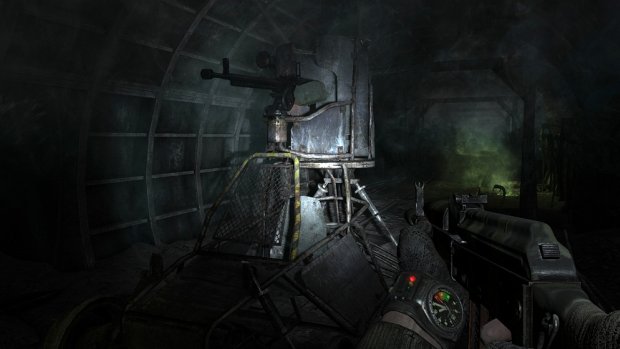 I can’t, however, abide a combat system that not only gives you really inaccurate, guns with very little ammo (seemingly encouraging you to focus on flanking maneuvers and close-range combat), then makes those guns so weak that four point-blank shotgun shells to the face won’t bring down a random grunt.

Really, what does Metro 2033 want me to do? I honestly don’t know. Was I meant to use my knife on a bad guy and treat the entire rest of the game as if it were Splinter Cell? Was I supposed to get into cover, and then shoot him in the head five times, and then try to whittle away his opponents? How would I even do that, with such limited ammo and such inaccurate guns? Was I supposed to blast away at my enemies from a distance, simply praying that I might score a headshot or two? Was I supposed to try and sneak up and take the bad guys out from close range, even though every individual enemy takes and deals more damage than I do? Seriously, what the fuck was I supposed to do?

There’s a right way to play Metro 2033, presumably, but I honestly have no idea what it is. Other reviewers seem to have found a way to enjoy the game, but I’m at a loss. I want to like Metro 2033, and I want to understand how I’m supposed to play it, but I can’t.