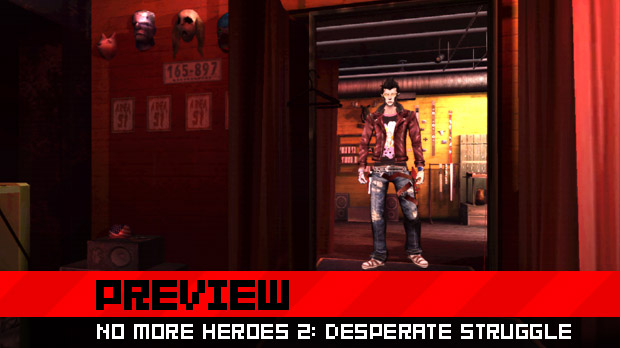 There’s nothing out there quite like No More Heroes. Born on the Wii by developer Suda 51, the original No More Heroes was wild and outlandish, a stylized beyond belief game for the Wii. Nothing quite like it has come since then, and maybe nothing will.

That is, except for No More Heroes 2: Desperate Struggle. Designed purely as a way to take things to the next level, No More Heroes 2: Desperate Struggle is a game of more, with more violence, more sex, more cheesy charm, more over-the-top everything. When dealing with someone like Suda 51 and Grasshopper Studios, a dev team that calls themselves a videogame band, with a mantra of “punx not dead,” things are bound to be get a little crazy. Check out our video posts to get a taste.

If you found anything to like about No More Heroes, pay attention to what I have to say: fat kitties, buxom prepubescent anime girls, gratuitous boob shots and wild gore are all in store for you. For those obsessed with the franchise, watch out for spoilers, there are plenty here. Hit the jump.

Taking place three years after the events of the original No More Heroes, Travis Touchdown is nothing more than a memory. For some reason, the people of Santa Destroy are just as stupid as the denizens of Metropolis, as Travis Touchdown exists only as a local legend. Anyway, it’s been three years, and the assassin’s are making a comeback. The first one we see? Skelter Helter, the albino brother of Helter Skelter, Travis’ first assassin he killed in game one. Seems little brother is more than pissed off and is ready for revenge. 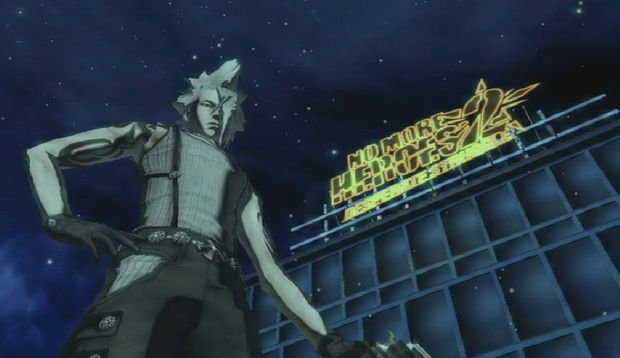 So what follows is a quick tutorial on top of the No More Heroes motel. As an introduction to the story, players will be brought to terms with the controls. Attacks are tied to button presses depending on the height of the Wiimote, and special attacks are applied with slashing motions. I didn’t see anything applied with the Wii MotionPlus, so that’s a drag.

Anyway, after a solid battle with Skelter Helter (who sports a revolver with a hoop of six-chambered cylinders), the whiny younger brother is, well, as near to being headless as you can get. Sylvia comes down, orders Travis to rejoin the United Assassin’s Association (of which he is now at the very bottom), and offers all the sexual advances to the dude to get him to play the game. Meanwhile, Skelter Helter (who remind you is very much nearly headless) declares a curse of revenge on Travis and proceeds to rip his own head off. Gnarly. 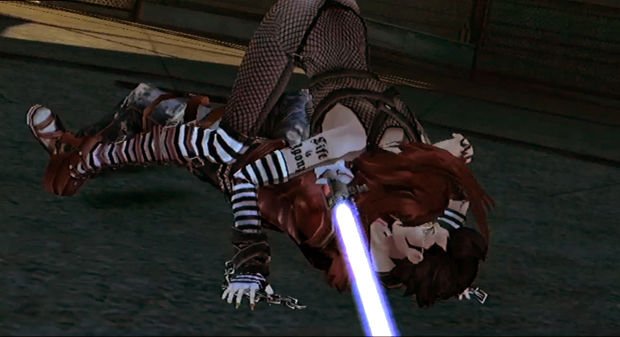 So what is set up is a gruesome tale of revenge. Travis’ good friend Bishop is shortly murdered, and the whole game from here on out has Travis motivated for more than just sex and fame. That curse of revenge is something he will have to live down.

So what else is new? Well, fans of the series will be pleased to know that the series has been updated in a way to best reflect what gamers want. For example, Sude 51 mentioned that fans wanted more blatant sexuality. Ok, so more double entendres are added. Even more, Travis will have flashes where he will go to a peep show and talk to a woman important to the story. The camera stays completely focused on two very important things, and I’m not talking about her eyes. At every opportunity, No More Heroes 2: Desperate Struggle throws cheesecake at you. It’s just as bizarre as you would expect.

Even the moe anime that Travis loves, Bizarre Jelly, has received a major boost in the game. No longer something Travis just loves, Bizarre Jelly is a mostly full anime that can be unlocked through the game by playing the cute ’em up shooter, Bizarre Jelly 5, at Travis’ apartment. This game is just almost fully featured, close enough that Suda jokingly mentioned porting to WiiWare with some updates. As for the anime, it’s a whole bunch of Cute Witch ten year-old girls with big boobs who wobble and transform nakedly three or four times each in their into video. It’s utterly over the top, and with the production values of a real anime studio, it looks great. 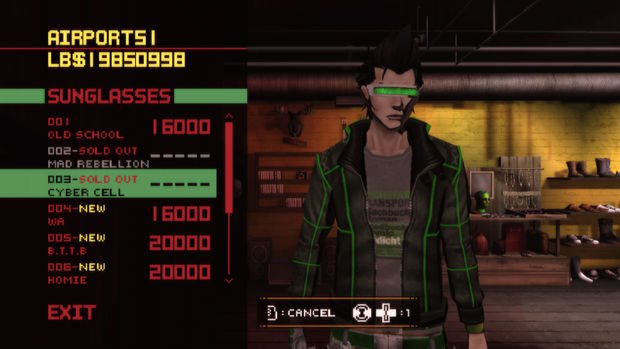 This can be found in his motel room, where Travis also can change the clothing he is wearing, check out his unlocked items, as well as play with his morbidly obese kitty. Jeane the cat is very fat, and so there is a full mini game pet simulator trying to get you bitter kitty to be healthy. It’s actually pretty fun, even though it’s just button presses. Some of the exercises, such as the kitty squat stretch, are just plain weird.

There more for returning players. Gone is the free roaming overworld. Fans found this boring, so instead the overworld is a menu-based affair, with places unlocking as you go. There are primary locations to continue the story line, and there are also shops to buy clothing, weapons and upgrades. Also new are the way the side jobs are performed. Instead of a mini-game off to the side, now the side jobs are 2D pixleated minigames, much like an NES game. All except one, for while Ubisoft wasn’t willing to show off this returning job game from the first No More Heroes, it is Suda 51’s favorite from the first, so keep an eye out for that. 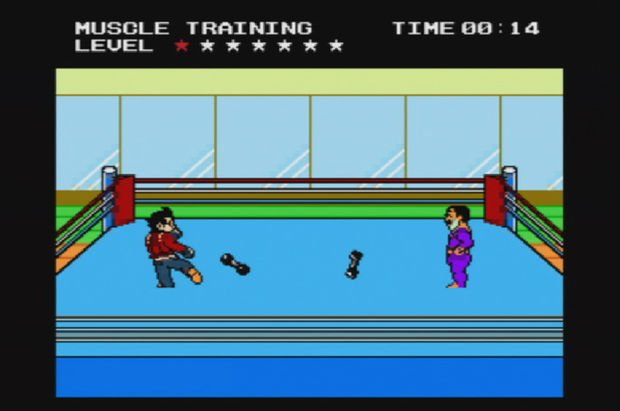 Other new places to visit include the gym. Owned and operated by a very effeminate hairy burly gym owner (is this a character trope in Japan or what?), Travis will have the chance train his muscles and build stamina. These too are performed in the style of an 8-bit game, with one entailing punching barbells thrown at Travis, while dodging kisses from the gym owner.

Oddly, my favorite moment of the game was near the end of our demo. New to No More Heroes 2 is the addition of two new playable characters: Travis’ twin Henry, and the sexy  assassin Shinobu. I had the chance to play as Shinobu, and the experience shares much with Travis’ gameplay, except for one big difference: she can jump. She’s very fast, rushing across the levels faster than Travis could dream, and the jumping attacks, coupled with the charged sword attacks, means she’s a threat.

I loved that I could jump, and repeatedly bounce off enemies with a perfectly timed attack, even garnering an impressed node from Suda himself. All in all, she’s not that much different from Travis, (even having to wipe down her sword instead of charging her sword, but doing the same thing gameplay-wise) but she promises to break things up nicely. 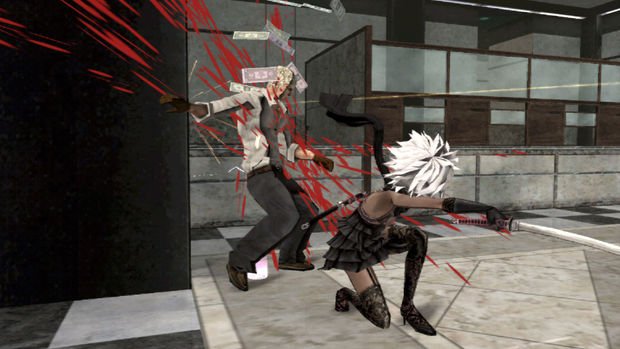 No More Heroes 2: Desperate Struggle really impressed me. More than just a simple continuation of the storyline form the first game, it is clear that Suda 51 wanted to make a game to appeal to the fan base. More than just fan service, it looks like he and Grasshopper are really going to improve the game in all the right places. Gone are the redundant and boring elements, and replaced are action packed and exciting things to do. Fans of the original should definitely take a look, and people that missed out on the original, I say this: Suda 51 and team have not forgotten you. No More Heroes 2: Desperate Struggle is designed from the ground up to make sure you know everything you need to know, you’ll know.