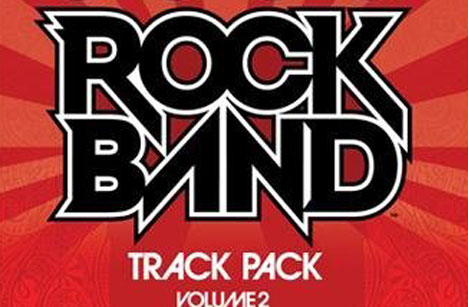 This standlone disc contains 20 songs, or as the box puts it, “20 All-New Epic Tracks.” That’s a bit misleading, however — all of the tracks on the disc are available for download from the Rock Band Music Store via your Xbox 360 or PlayStation 3.

MTV/Harmonix sent me a copy of the Xbox 360 version of the disc last week, and despite the fact that I had already downloaded 17 of the 20 tracks, decided to give it a whirl. Now I’m wrestling with the question — who is this disc actually for and who should actually be buying it?

Hit the jump for details and some thoughts in this “non-review” of the Rock Band Track Pack Volume 2.

As you can see, the set list is varied, covering a pretty wide range of bands and styles. There’s a nice variety in terms of difficulty as well, with difficulty guitar tracks like “Snow (Hey Oh)” and the near-impossible drums of “The Perfect Drug” some of the highlights.

Toss these 20 tracks on any “full” game package, and you probably wouldn’t hear much complaining. Even someone only casually interested in music scenes will find stuff to recognize, as many of the songs are popular radio singles that most people will be familiar with. If anything, that alone speaks to the strength of the downloadable content that’s been made available thus far for Rock Band.

Assuming each of the tracks cost $1.99 on Xbox LIVE or PSN, downloading these individual tracks would cost you about $40. The first of the good news is that the Rock Band Track Pack Volume 2 retails for $29.99, which means picking up the pack will save you ten bucks. The better news is that if you have an Internet connection and Rock Band 1 or 2, the game includes a code that can be redeemed to download all of the songs to your hard drive to play in either of those two games.

The game does not require that you own any other Rock Band game to play it; you simply need some sort of plastic instrument to play along. As a standalone game, Track Pack Volume 2 is as barebones as it gets — there’s really not much going on here. Most (if not all) of the assets are ripped directly from Rock Band 1, including the menus, which don’t feature any of the Rock Band 2 “upgrades” (you can’t see individual part difficulties or have advanced sorting, for instance).

It features a solo tour reminiscent of the old-school linear Guitar Hero progression, basic quickplay options, training modes, and even leaderboards. “Character creation” goes as far as giving yourself a name, and that’s it. There’s no “World Tour” mode or online multiplayer options. For that, you’ll have to buy Rock Band 1 or 2.

And that would be my recommendation — go buy Rock Band 1 or 2. As a standalone game, there’s not much here that it should be in someone’s collection. Sure, it has its own achievements and trophies if you’re into that kind of thing. But unless you’re some kind of music freak/Rock Band fanboy like me, you’re not going to necessarily be into all 20 of these track. And if you are like me, chances are you’ve already download most (if not all) of these tracks anyhow.

The DLC model, while a bit more expensive, will allow you to pick and choose — there’s no wasted money on that one Garbage song you heard only once while peeing at a rest stop on the New Jersey Turnpike. (True story.)

Really, the barebones presentation of these track packs are a good case for DLC as the ideal model for music games like Rock Band. If you haven’t spent a dime on Rock Band DLC and you actually love all 20 of these songs, you’re looking at a pretty decent value. Otherwise, you might want to consider spending $30 on Microsoft points (or adding funds to your PSN wallet) and only grabbing the tracks that you really want.

Rock Band Track Pack Volume 2 is available this week for the Xbox 360, PlayStation 3, Wii, and PS2.