With support from our partner, Intel, we’re exploring how technology is evolving and improving the gaming experience. The company’s goal is to develop tools that, in the right hands, allow us to play new and exciting games.

But to go forward, you must sometimes go back. There’s a growing number of creative tinkerers busy rewiring our expectations of and interactions with technology to create large-scale, physical multiplayer games that embrace your friends as tangible people.

“The average PC or console game is played by a single, motionless person stooped over a tiny screen, making imperceptible button presses on a tiny black gamepad,” says Bennett Foddy, a game developer and biosciences academic at Oxford University, as well as the man responsible for games like QWOP and GIRP. If you’ve played them, you know that Foddy takes a particularly joyous interest in the way the human body contorts and moves when bogged down by pesky physics. “The best party games pull people away from the screen and make it possible for the crowd to see what the player is doing.”

And making the best party games is exactly what he and Doug Wilson seem to be trying to do.

In addition to studying interaction design as a Ph.D. candidate at the IT University of Copenhagen, Wilson co-owns the game studio Die Gute Fabrik and is the lead designer of Johann Sebastian Joust, which has been popping up in bars, arcades, and conventions since its birth at the 2011 Nordic Game Jam. J. S. Joust is a bare-bones, slow-motion game played with some sort of accelerometer controller — it’s usually played with a PlayStation Move wand, but was developed using a Wii Remote.

A Mac client with Wilson’s UniMove plugin plays a selection from Bach’s Brandenburg concertos while the game monitors the controllers’ movement. During the slow stanzas, each player’s movement window is restricted — if your controller shakes too much, you lose. In the faster stanzas, that window opens a bit wider, giving players a chance to knock, shove, or jostle their opponents out of the game. Hence, jousting.

There is no screen.

“Moving in slow motion, no matter what you’re playing, is f*cking sweet,” Wilson said during his Independent Games Summit presentation at this year’s Game Developers Conference. “That really is the inspiration behind Joust. ‘Let’s make a game where we just f*cking move in slow motion.'”

The real trick to Joust, though, is that it changes players’ relationship with the technology behind it. The truth of the matter is that accelerometers have limited use in traditional gaming — they lag or they’re imprecise. “Despite all these promises and optimism, all of these technologies kind of sucking is the reality,” he continued. “To me, that’s awesome. It’s precisely because these technologies suck that makes them really interesting and fun. Part of the key is to embrace the set of technological limitations rather than trying to fight them.”

Joust embraces the accelerometer’s clunkiness and makes it a central mechanic — not knowing exactly how much the Move can shake at a given moment adds tension and excitement — rather than trying to compensate for it. The mechanics and the technology work perfectly together because the mechanics are the technology. It only works with accelerometer-based controls and a large group of people.

The same thing that gives PlayStation and Wii developers fits is making Joust a huge success on the indie games circuit.

“It was actually originally an unauthorized project,” says Foddy.

The Copenhagen Game Collective, a group of Danish artists, academics, and game developers co-founded by Wilson, was partying on a boat when MegaGIRP was born. Foddy continues, “[Doug] hacked together a keyboard controller out of four DDR dance mats, so you could play it in front of a crowd, with the game projected on a screen. They told me about the idea on Twitter while they were working on it.”

The original GIRP assigns different letters to golden rings set into a rock face. When a letter is pressed on the keyboard, the nameless free climber grabs the ring and hoists himself up. The goal is to get as high as possible before the rising tide swallows you up. Like in Johann Sebastian Joust, there’s an interplay between the technology and the mechanics of the game. “There is an important correspondence between the virtual cliff face and the flat control mat in MegaGIRP,” Foddy explains. “But the real 1:1 correspondence comes from the use of your physical body rather than the technology.”

Playing MegaGIRP is a full-body experience, the dance pad having replaced the keyboard. “The reason nobody has made it more than halfway up the cliff so far is not that GIRP gets a lot harder as you progress,” says Foddy. “It’s that in MegaGIRP, you get too tired to go any further.”

Using the dance pad instead of the keyboard may have pushed MegaGIRP closer to “real” rock climbing, but it also invites other social possibilities — it seems a little awkward to play, like Twister but more difficult. “I think it’s crucial that you look a bit silly playing it, and you’re constantly at risk of falling over,” says Foddy. “That creates a sense of excitement for the onlookers. Also, the crowd tends to participate, yelling out advice or warnings.” Given that it takes a large screen and projector to work, and that it’s designed so that players can’t always see the the action, it’s virtually impossible to play MegaGIRP by yourself — it requires at least one other person in the room with you but is at its best with a group of friends. 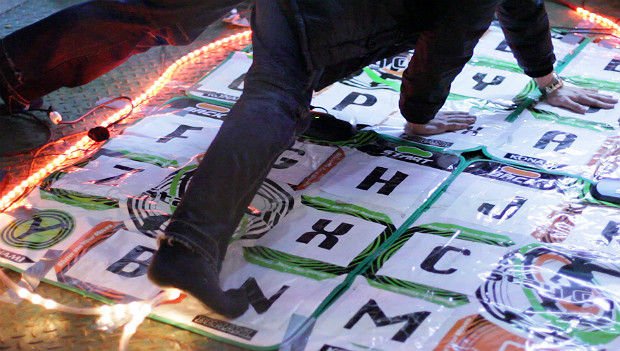 If both Johann Sebastian Joust and MegaGIRP seem tailor-made for large events, it’s because a growing number of independent games festivals and art collectives have been sprouting up like weeds. These are organized staging grounds for the types of physical experiences described by so-called “folk games,” an expression Wilson used in his GDC presentation to describe his projects.

“The Kokoromi and Babycastles events have been running for a while, but there’s also Wild Rumpus in London, Juegos Rancheros in Austin, Prince of Arcade in Montreal, and a bunch of other, newer groups all around the world,” Foddy tells me. “For these parties, it’s all about social gaming (in the real sense, not the FarmVille sense), and so there is a call for games that can be enjoyed in a loud place by a large crowd of drunk people.

“For games to work at these events, it helps if they are multiplayer games, but even the biggest multiplayer games can only be played by a subset of the people there,” he continues. “So the games need to be fun to watch and big enough for a large crowd to see what’s going on. And traditional videogame tech isn’t really conducive to that.”

While many of these social games are rendered somewhat inaccessible by their size and scope, or limited to large events or one-off art installations, Doug Wilson and Bennett Foddy’s approach to non-traditional tech isn’t taking place in a vacuum. Wilson is determined to make Johann Sebastian Joust commercially available sometime this year, convinced that a few gyroscopes and a music API can bring friends together in a physical space in a way “social gaming” can’t.