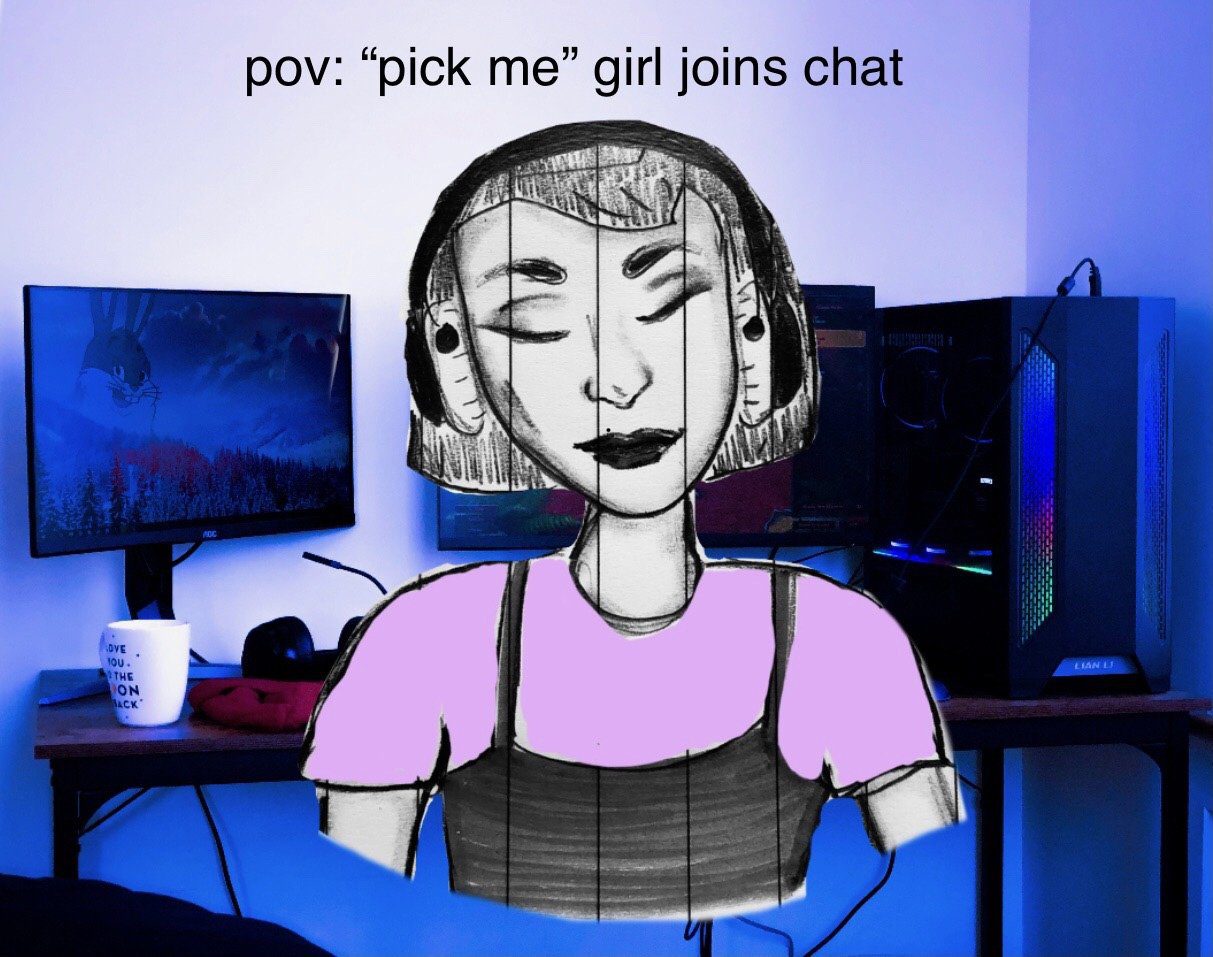 Or, “pick me” girls and the culture that encourages them

The “pick me” girl has always existed in one form or another, you might recognize her as a proponent of the phrase “I’m not like other girls,” or for being “one of the boys.” This particular incarnation, often depicted as sinister and possibly prone to hair-twirling, originated on TikTok, a spoof of the Grey’s Anatomy scene where Meredith pleads that Derek “pick me, choose me, love me.” “Pick me” girls on TikTok essentially say misogynistic things, like how other girls are sluts and that the 19th amendment should be revoked, stuff like that, in order to identify with and be validated by men. The impulse to do so isn’t entirely their fault. Many cultures normalize and reward misogyny, and it can be difficult to separate yourself from cultural values even if they actively harm you. Then, not-“pick me” girls (“pick them” girls?) are, naturally, upset with “pick me” girls for putting women down. “Pick me” girls then get angry at detractors for being a bunch of dumb sluts, the wheel keeps turning.

And gaming is absolutely not immune to the eternal battle between “pick me” girls and … regular girls (???). In fact, it’s been a topic of many viral TikToks. User @lindseyszn, who makes TikToks on gaming and Discord culture, for example, often features a “pick me” character in her comedy videos. This one, where a “pick me” fights with fictional boy Alex’s girlfriend about being the person he Snapchats most often (kids these days!), has 1.1 million likes and 4.2 million views since it was posted on March 9. “This made my blood boil, my ex’s name was Alex,” one TikTok user commented.

Gamer “pick me” girls always want to be the only girl in their Discord server, they make fun of other girls for innocuous things like wearing pink, and cannot stand their fellow players’ girlfriends. Across the board, “pick me” girls kind of suck, but I also feel bad for them. 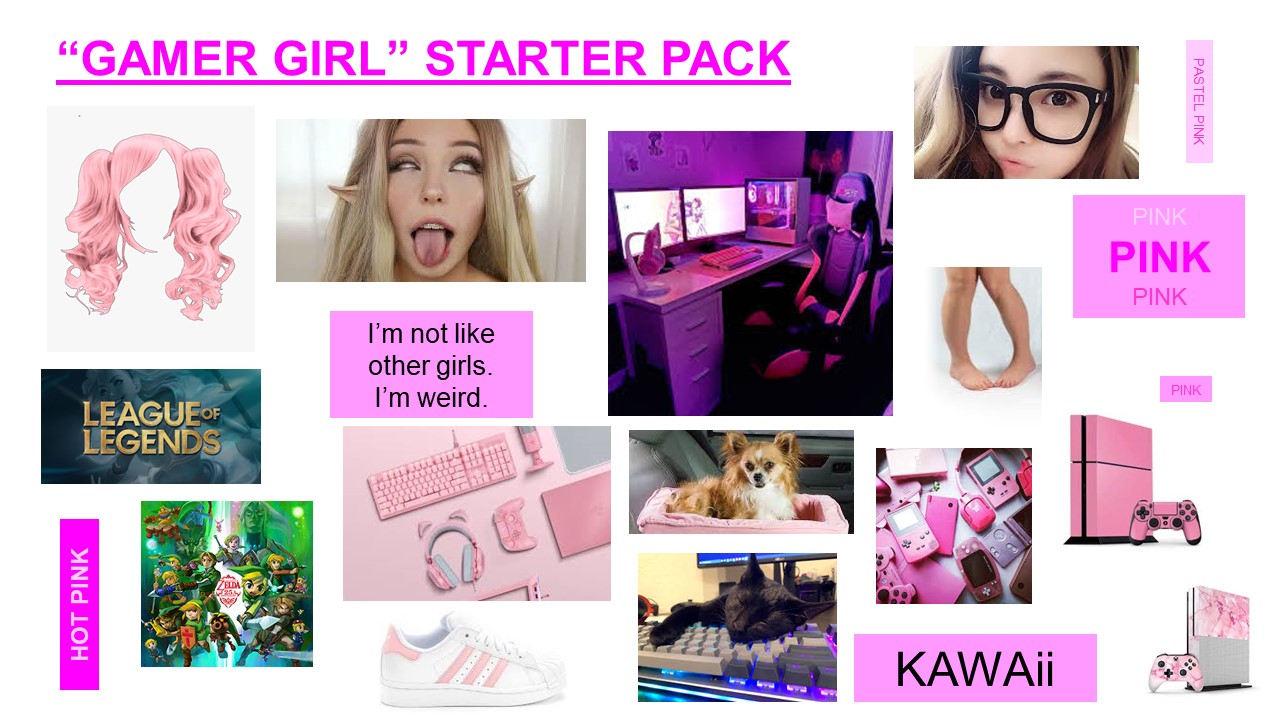 One of the earliest things I learned as a young self-identifying feminist is that women should support other women. Then I got older and learned that many women use that adage as a way of avoiding accountability for bad behavior, like racism, classism, and general asshole-ery. Like, I’m not going to support fellow woman Gwyneth Paltrow, who has an estimated net worth of $150 million and loves medical misinformation, no matter how many vagina candles she flings at me.

So no, women have no obligation to unconditionally support all women, who are people that do and say bad things just like any other person. But a lot of “pick me” girls and the girls who despise them are young and online, the stakes are lower and the mindsets still malleable.

Young women in gaming already have so many unnecessary roadblocks in their way, most of which have to do with the way they dress, their sexuality, or race. Before “pick me” girls became the unlikeable villains du jour, for example, the sexy-cute aesthetics of 2019’s “e-girls,” who often were also gamers and anime fans, triggered gatekeeping within online gaming communities. As soon as they saw cleavage or a pair of fishnet stockings, too many young men decided to demote e-girls to the mythic role of “fake gamer girl,” a girl that doesn’t care about anything other than taking advantage of poor, sex-starved gamer boys. 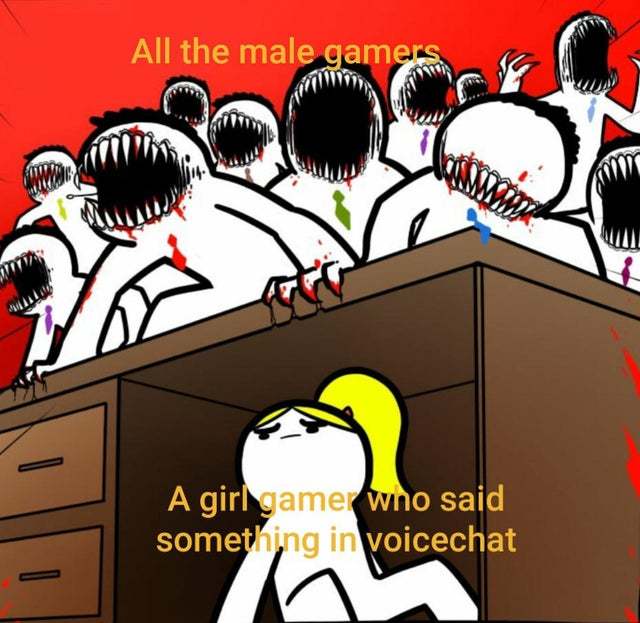 And gatekeeping is even more likely when a gamer is a non-white female. In 2019, the online community Black Girl Gamers reported that 65% of members have experienced racism while gaming and 82% have experienced sexism. As you can imagine, that combination can be frightening, disheartening, and discouraging. It’s possible that women in games wouldn’t feel the need to become “pick me” girls if the gaming community was actually welcoming to them. Women in gaming shouldn’t have to denigrate themselves in order to feel accepted by young male gamers, who often are the loudest perpetrators of race and gender-based verbal attacks.

But that doesn’t make being a “pick me” and becoming part of the bullying problem okay either. I think “pick me” girls should be honest with themselves — inflammatory statements, especially when they’re about people who look just like you, are often whispered shouts to the world, declaring “I’m full of self-hate.” If anyone pays you extra attention because you’re willing to debase yourself, their attention isn’t worth it.

And for the girls who can’t stand “pick me’s,” if the opportunity ever arises and a “pick me” of your choosing seems open to it, having a conversation about internalized misogyny could be healing and transformative for everyone involved. Even if no one ends up changing their mind, you could at least begin to understand each other a little better. That might be an overly-hopeful scenario to imagine, but you never know! In any case, I’m not looking for unconditional acceptance from anyone. Just a little solidarity.