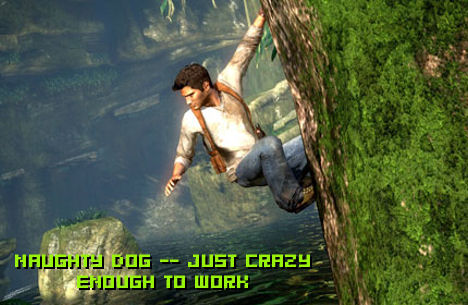 Naughty Dog’s games are “produced by the people who work on it – designers, team leads, programmers, even our co-presidents. Anyone who wants to step up and take responsibility for an aspect of the game… Is empowered to just stand up and start organizing.”

A crazy approach, but if Uncharted: Drake’s Fortune was anything to go by, it’s an approach that seems to work. Naughty Dog also makes sure that everyone in the company is involved with game design: “Everyone, at all levels, works directly on building the game”.

“That helps us stay very focused on quality and fun, since the people with the responsibility are the same creative artisans who are making the game. Nobody signs off on an asset or feature that isn’t up to scratch just because a piece of paper says it’s time to do so.”

The 90-strong team has done very well for itself, so maybe this is something other companies should take note of. Come on, Mr. Riccitiello, design us a game. I dare you.