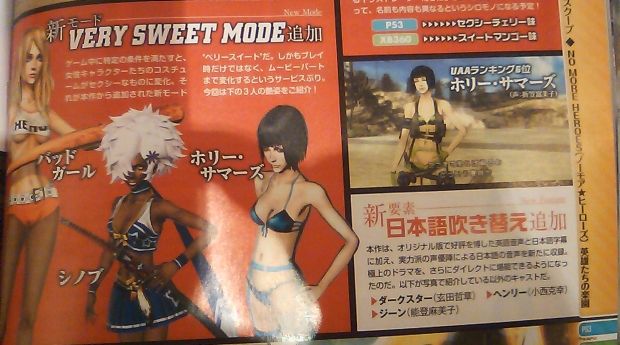 We’ve heard rumblings for some time now that No More Heroes could be making the Hi-Def jump. The latest issue of Famitsu has finally confirmed what we all have been hopping for! The original No More Heroes will indeed be hitting the PlayStation 3 and Xbox 360 on February 25, 2010 in Japan.

A couple of scans of the latest Famitsu have been uploaded to the Internets showing off some of the new features for No More Heroes: Heroes’ Paradise. Better graphics, no motion control, Japanese voice acting and a new mode called “Very Sweet Mode” where the girls of No More Heroes wear next to nothing. Sweet!

What do you all think of this news? I’m pretty excited. The only way this news could get any better is if Heroes’ Paradise gets released outside of Japan!