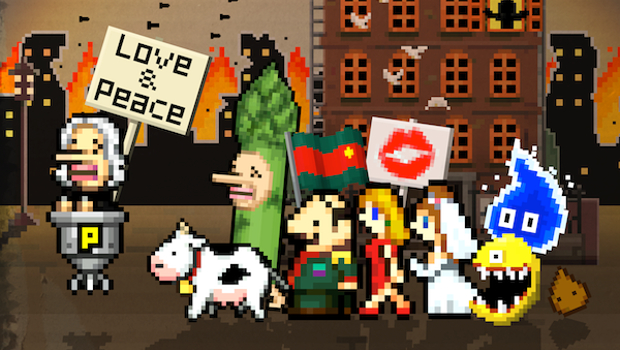 “Please touch my world. And chat with me a little.”

Onion Games has one of the best Twitter accounts going. It’s also run by three of the most talented and passionate indie developers in Japan. You may not have heard of Yoshiro Kimura (No More Heroes, Little King’s Story), Kazuyuki Kurashima (Super Mario RPG, Live a Live), and Tom Ikeda (Lollipop Chainsaw, Harvest Moon) before, but you’ve likely heard of at least one of their games.

The trio has been working to promote their studio for a while now, with adorable promotional animations and onion-infused re-imaginings of imagery from popular games. All that has just been building up to today’s announcement of their first official onion game — Million Onion Hotel. The game will be playable at BitSummit 2014, has artwork from Kazuyuki Kurashima (monster designer of Little King’s Story) and music from Hirofumi Taniguchi (Chulip). Other than that, all we know is it’s planned for iOS, it’s “very tiny work” directed by Kimura, and that it’s “his poem” and “imagination 100%”.

If you are a videogame enthusiast of a certain persuasion, then Million Onion Hotel just became one of your most anticipated games of the year.