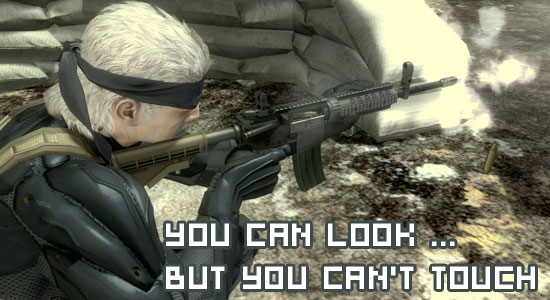 The first game I played at this year’s Tokyo Game Show was the PlayStation 3 demo of Konami’s Metal Gear Solid 4: Guns of the Patriots. It’s a good demo, with a beginning, a middle, and an end. Unfortunately, most of you won’t get a chance to experience it.

In the latest Kojima Productions podcast, Konami’s Michael Shelling made it pretty clear — E For All will be the only chance non-press gamers will have the chance to play the game before its release next year. Kicking yourself for not picking up those E For All tickets, aren’t you?

If Sony were smart, they’d strong-arm Konami into getting the impressive demo up on the PlayStation Network before release. If anything, having a demo running in retail stores might even sell a few systems. Perhaps that sound we’re hearing is that of a checkbook opening up in the distance …