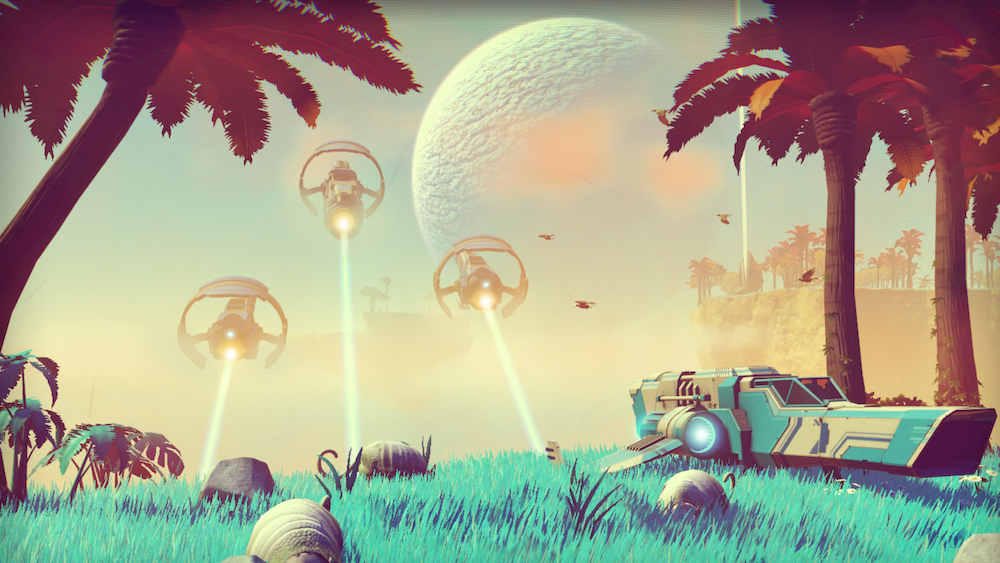 No hand holding, all about discovery and exploration

No Man’s Sky. We’ve been abuzz about this game ever since the first trailer was revealed late last year, and today Destructoid got to see a live gameplay demo showing off the amazing scope that the developers at Hello Games are trying to achieve.

One of the big things about No Man’s Sky is that they really don’t want to get too specific about all the little things players can do. The trailers and screens give some clues and all that, but otherwise they want players to just discover things for themselves.

We were still able to learn a few more specifics though, but just enough that we still can’t quite wrap our heads around this universe exploration game.

The video that was shown off during the PlayStation press conference was what founder Sean Murray showed off to us. Starting on a beautiful colorful planet filled with dinosaur-like creatures, to jumping into a ship, blasting off into space, and finally getting into a dogfight that would lead us entering a nearby barren brown planet.

It was one thing seeing the video, but seeing it play out in front of us live just blew us away. Everything was so seamless, and the fight against enemy ships reminded me a lot of how space combat worked in Star Fox 64.

Players will be turned lose on a random starting point on the far edge of a galaxy when they begin No Man’s Sky. There’s no objectives, and there’s no real story or narrative here. Instead, players are encouraged to move towards the center of the galaxy. But that’s no easy task: the closer you get to the center, the harder the game will become. You’ll need to improve your character and your ship, which is accomplished by gathering resources on the planets you explore.

There could be millions, even billions of planets spread across this universe. An insane concept to wrap your head around. That said, not every planet will be super special to explore. Murray tossed out a number estimating that maybe 90% of the planets you encounter will be barren, while 10% will be these rare treats. Maybe you’ll be lucky and come across a forest biome, or something filled with all sorts of fish life. It’s a small chance, and to the team it’s about creating these holy-shit moments where players feel amazing that they found something so rare and unique.

So this will probably give you a large sense of what kind of experience No Man’s Sky will be aiming to provide. It’s appealing to those players who are into what’s continuing to become a bigger and bigger genre.

“What we find is that the people like me who grew up with like Mario, that Mario generation, we think in terms of levels, and story, and how many collectables will there be,” Murray told us.

“We get this question all the time, what are the quests, the missions … they’re imagining [something like] there are a hundred pieces of an amulet and they’ve been spread across different planets and you have to go find them. There’s none of that. No NPC is going to walk up to you and say ‘I farm space chickens and all of them have been lost! Can you find them and bring them back to me and I’ll give you a reward’ or whatever.

“There’s none of that and we get those questions a lot. The people that I find really interesting are the people who are growing up with Minecraft at the moment, who are like 16 or whatever, and they will just come up and they’ll be totally accepting and they will just want to know ‘can you do this, can you do that.’ For them, Assassin’s Creed is confusing and limited kind of thing, I think.” 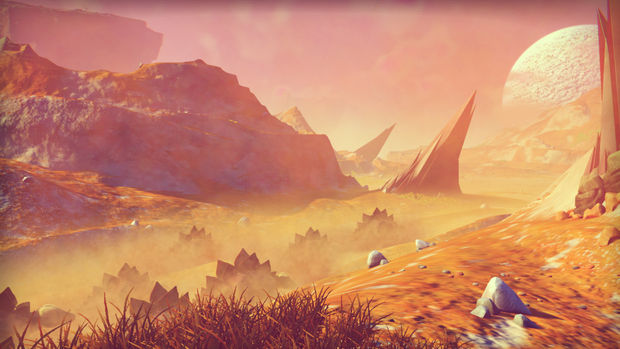 No Man’s Sky is proudly stating that everything about the game is procedurally generated in some form or another. An amazing feat, made even more amazing when you realize only a handful of people work at Hello Games. So how are they pulling it off?

Sean explained their process to me with the example focusing on a tree. They created one single tree that would act as the blueprint to the game. Then they applied a slider system of sorts that you’d see in games where you can customize your character features. This happens to all their creations, and it’s a smart tech system that understands the basic structure of the object. So the system knows that trees are supposed to have trunks, and it won’t do something like create a horse-shaped tree, for example.

There’s an infinite variety of every single thing, and it was mind-blowing just seeing how many different types of trees they have in their system as they kept on scrolling and scrolling through all the objects while they were demonstrating the tech engine to us. This system now completely frees the team from the constraint of content creation. 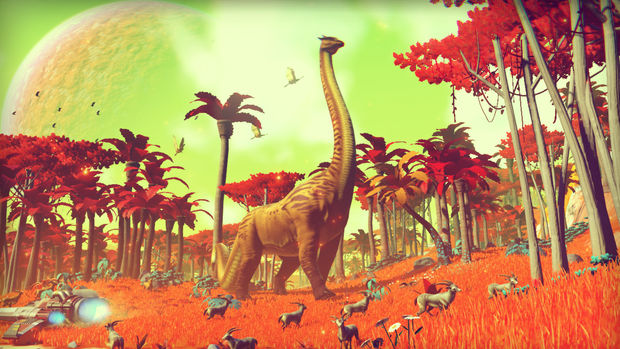 “The big thing that I find as a developer is that [this system] frees us. Content is really constraining. Next-gen games in particular are really constraining to what we can do. And we just have to think about that a lot less,” said Murray. “Naturally for making something like Assassin’s Creed, you have to have 800 people working to make all the content. And then naturally you have to have a blueprint for all those people to work with.”

All the things you can encounter in the world also have their own lives going on too. If you come across something like a rhino, for instance, you can follow the creature around and watch it drink water, eat grass, fall asleep, and just live out its life.

The same goes for fleets that are soaring through the solar systems.

You can watch a fleet of ships descend upon a planet, leave the area for a few minutes, and when you come back you’ll see where the vessels would realistically be at had you continued to watch them the whole time. The AI lifeforms are heavily reliant on all sorts of math to make what you encounter have a realistic nature to them, and they sort of stop existing in the world when you’re away from them in order to not overload the engine. 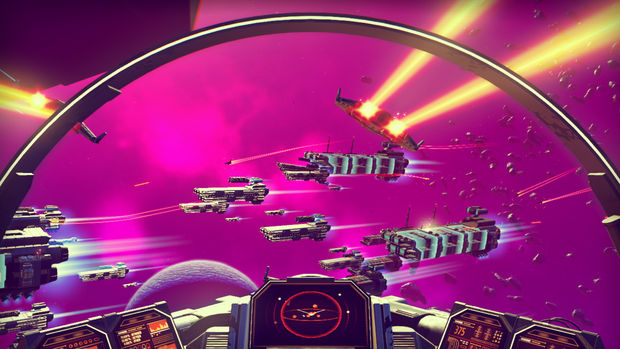 Our meeting finished off by briefly touching on multiplayer. Everyone shares the same universe, but everyone is going to be starting at different parts of various galaxies, very far apart. This is a frontier, as Murray told us. It’s about survival, being a tiny spec in this universe. They’re doing the opposite of what an MMO would do, and while you’ll potentially come across other players that chance is very small.

Despite learning new specifics, there’s still a substantial amount of mystery behind this game. And that’s largely on purpose.

“Games have gone in this ridiculous direction where they don’t hold anything back. First three minutes of Call of Duty is like I’ve seen everything that I could ever see,” said Murray.

“After you’ve seen five buildings collapse in front of you in an enormous earthquake or whatever I’m just kind of numb to it, I’ve seen it all. I think stuff like Minecraft, DayZ, and Terraria have been popular as a reaction to that. It’s swung so far up in this way. It must be horrible to be on the Call of Duty team and work out how you’re going to wow people next E3. What are the boardroom discussions like? ‘Let’s have a horse companion!’

“We want you to boot up, spawn on a planet, and feel at a loss kind of thing. And then just go work out things for yourself. That kind of lovely feeling in Minecraft when you first played it and you didn’t know what any of the formulas were for crafting. It’s just a cool feeling.”

No Man’s Sky will make its console debut on PlayStation 4 at some point in the future.