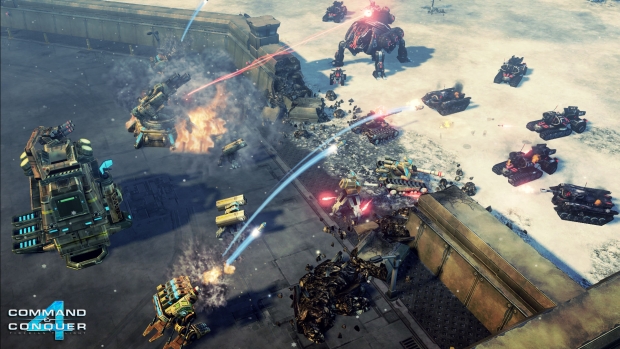 The hot button issue for PC gaming as of late has been LAN and dedicated server support. Call of Duty: Modern Warfare 2, StarCraft 2 and other games are ditching it.

So what about Command & Conquer 4: Tiberian Twilight? Sorry to be the bearer of bad news, but on top of the fact that you need to connected online at all times while playing, Command & Conquer 4 won’t have LAN or dedicated server support.

The reason being, as lead designer Sam Bass put it, is because of the global player progression system. This system is “across single-player, multiplayer and skirmish and all the information is stored in a server. So if you go to another machine — friend’s house, Internet café — whatever, you can login with your profile and all the stuff you’ve unlocked is accessible to you there. It all lives on a server so you can’t really do dedicated servers with that.”

It’s not all bad news in terms of multiplayer, at least. EA Los Angeles has “completely redone the networking back end of this game.” The previous infrastructure that was in place was getting really dated but this new system is “a lot more solid, a lot more modern. There’s a really solid networking and just sort of getting into a game is much easier then it was in the past.”