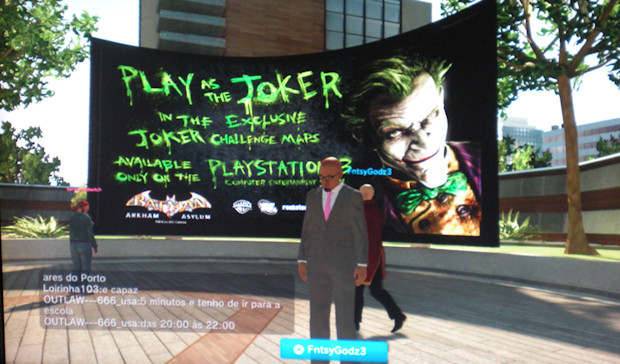 It would seem that, far from being a complete waste of time, PlayStation Home can actually be a good source of leaked news. Advertisements for Batman: Arkham Asylum littered Home today promoting the fact that the hot looking game will allow you to play as The Joker. That’s right, Gotham’s Clown Prince of Crime will be yours to enjoy.

The ads have since been taken down and it would appear that we were not supposed to know about it yet. However, the world has inadvertently been made aware that “exclusive challenge maps” will let players take control of Batman’s notorious arch nemesis. Whether or not these maps are simply exclusive to Joker, or exclusive to the PS3 entirely, is up for debate. The Home integration would seem to suggest that PS3 fans have a little bonus treat in store, however.

If this is indeed a PS3 exclusive, I believe I know which system I’ll be picking this one up for. Not that Sony ever writes checks to allow this sort of thing.

[Update: Eidos and Warner Bros.’ PR lasers were set to blast, confirming this not long after the story went live. Yes, this will be exclusive to the PlayStation 3, and The Joker will be available as a free download when the game is released. It appears he’ll only be playable in the game’s Challenge Maps.

More information can be found in the June issue of PlayStation: The Official Magazine, so go on and find that. Also… new screenshot of the Joker!]