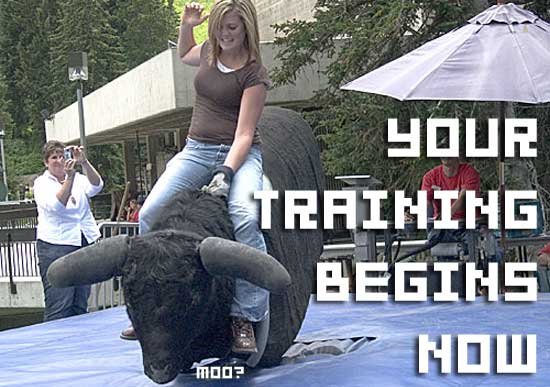 Gamers, your demands have been met — Crave Entertainment has partnered with D2C Games, Inc. and Professional Bull Riders, Inc. to deliver a full-featured bull riding experience on your favorite videogame consoles. Coming to the Xbox 360, Wii, PlayStation 2, PSP, and PC, the game is scheduled for release in time for the PBR World Finals beginning in October 2008.

Players will create their own bull rider, and compete as a professional rider or — take a deep breath and wait for it — a bull, at multiple events that span the United States. Yeah, that’s right, we said it — you get to be the bull. The game also features a multiplayer mode, which we’re sure will prompt many drunken arguments over who gets to control the ferocious, testicle crushing beast.

In the press release issued on Friday, Crave Entertainment’s president, Rob Dyer, chills us to the bone with the following statement:

“PBR has a dedicated fan base and the sport is poised to become the next NASCAR.”

LAS VEGAS (PBR World Finals)- Nov. 2, 2007- Crave Entertainment, a leading publisher of console videogames, and Professional Bull Riders, Inc. (PBR) in partnership with D2C Games, Inc. today revealed details of the Professional Bull Riders videogame. Capturing all the adrenaline and challenge of the Toughest Sport on Dirt(tm), the game lets you play as a pro bull rider or as a bull in multiple events leading up to the World Finals. Available for the Wii(tm) home video game console, the Xbox 360®video game and entertainment system from Microsoft, and PlayStation(r)2 computer entertainment system, with downloadable versions on the PSP® (PlayStation®Portable) system and PC, the PBR games are scheduled for release in time for the World Finals beginning in October 2008.

“PBR has a dedicated fan base and the sport is poised to become the next NASCAR,” said Rob Dyer, President of Crave Entertainment. “Capturing the intricacies, adrenaline rushes and excitement of professional bull riding is paramount to the success of the games.”
“PBR is the fastest growing sport in the U.S. with nearly 20 million fans watching or attending PBR events in 2006,’ said Sean Gleason, CMO of PBR. “We are thrilled to partner with Crave Entertainment and D2C Games to bring the sport of professional bull riding to our millions of loyal fans.”

Players may create their own character and compete as a professional rider or a tenacious bull throughout 10 three-round events in multiple locations, including New York, Anaheim, and Atlanta. Challenge or play as top riders, including Guilherme Marchi, Justin McBride, and Chris Shivers, or play as one of the tour’s ferocious bulls!

Unlimited play modes test players’ skills in either staying on for at least eight seconds or bucking off the rider before his time is up and Season Mode features unlockable riders and bulls. Become the best rider or bull in multiplayer by having the most “wins,” or become part of the Millionaire’s Club by beating some of the meanest, toughest bulls in the history of the PBR. Intuitive controls and multiple difficulty levels allow anyone to pick up and play and realistic sounds from screaming crowds to bone-crunching falls max out the realism.

“D2C Games is focused on capturing the essence of the sport while delivering a video game that is easy to pick up and very fun to play,” said Scott Orr, CEO and Founder of D2C Games, Inc. “PBR fans for the first time will be able to experience the most exciting eight seconds in sports.”