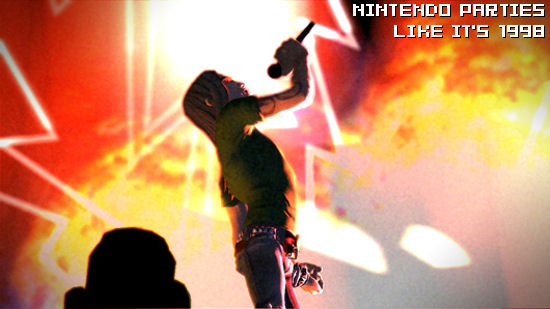 “Come on Nintendo, we need a hard drive,” are the words of Harmonix design director Rob Kay. We all found out a while ago just how severely gimped the Wii version of Rock Band is, something which should have come as no surprise. Harmonix doesn’t want any of the blame though, and cites Nintendo’s lack of storage space as the reason why one of the big flaws — a lack of downloadable content — is present.

“If the platform could do it, we’d jump on it”, Kay explains. “It’s something that we championed to Nintendo, that we’d like to do it. Who knows what will happen down the line, I don’t know what’s coming down the line, but that’s the reason there’s no DLC in Wii Rock Band“

Fair enough. I can’t see everyone rushing out to buy a whole bunch of SD cards for Rock Band. The Wii does have internal memory storage, of course, but it’s pitifully small, because to be honest, Nintendo doesn’t think about this stuff properly. Nintendo does things its own way, modern technology and convenience be damned!

The company insists that nobody needs an external hard drive, but this is the same company that once said online multiplayer wasn’t important. It’s just frustrating. I honestly think the Wii could be something wonderful for everybody, but backwards-thinking stuff like this helps nobody.