[No Clip is a community blog series where AwesomeExMachina applies a series of critical restrictions to a popular video game to see how it changes the gameplay experience. For this installment, he tries out his own, more difficult version of Hardcore Mode in Fallout: New Vegas, and tells us how it transforms New Vegas into a completely different game. — JRo]

When Bethesda shared their new Hardcore mode being added to Fallout: New Vegas, insane gamers around the globe cheered in unison. I was one of them. The idea of finding my character feverishly scrounging through a melted townhome for a bottle of irradiated water was exciting. It’s not for everyone, but for the first time in my video game history, I might find myself dying of something other than getting shot, stabbed, blown up, or misstep off a ledge. Instead, I’d find my character starving to death in the middle of a nuclear wasteland desert and the reality of it was an unmitigated thrill.

But when I finally got my hands on hardcore mode, I found myself forgetting it had ever even been switched on. I had expected dire circumstances and rationing supplies. Instead, I found a small can of uncooked beans could apparently fulfill my character’s hunger for a week.

Hardcore mode was a bit of a disappointment as it lacked one critical element: being hardcore. The message prompt at the start of your characters game might as well have just read: Would you like to be slightly inconvenienced from time to time? Y/N? So, I pondered a challenge. Could I turn New Vegas’ new mode into something infinitely more ruthless? 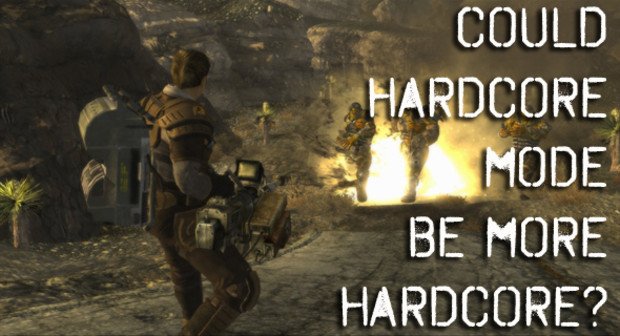 There was little hope of completing the game with what I had planned, so instead I organized an elaborate adventure course. I set up a mapped route that would take me through New Vegas’ more iconic areas, brush the very top of the map, and then careen back down the other side to where I began. With this ludicrous set of “realistic” principles in my game, could I survive more than a few feet? More importantly, would it even be remotely fun?

Ignoring these nagging concerns to my sanity, I tossed together a new character, named him, selected a properly grizzled beard, and then sent him off to the most remote corner of the game, at the scenic Mojave Outpost. I dropped all my equipment save for a vault jumpsuit, a simple pistol with a single clip, and one bottle of clean drinking water. Then, finally, I set myself up with the following insane list of “hardcore” changes:

If anyone ever doubted the quantity of my nerd cred, I would tell them about the ridiculous charts I made for myself which, along with a little stopwatch, kept me on a regular schedule of food and water consumption. I won’t bore you with the details, suffice to say it made me use up a much more realistic amount of supplies for the energy I was expending trudging through a terrible wasteland.

As the journey commenced, the terror of each encounter near rivaled any intentionally-built horror game I’ve previously played. Fully aware of the danger each enemy represented combined with an inability to actively see my current health left me feeling outrageously helpless. When bullets started flying, I clung to cover like I was playing Gears of War. Perpetually low on ammo and simultaneously unable to see a concise number telling me what was left in my clip, I silently counted shots. Without a compass, I was unable to see oncoming enemies or even easily discern if I was walking in the right direction. Panicked runs from Cazadors frequently left me off-track, desolate, and lost.

There was no doubt, even within the first ten minutes, that this new hardcore mode was way over-the-top. I could scarcely fend for myself. Surprisingly, however, despite my expectations, my increased food and water consumption was the easiest to overcome. Food and water in the Fallout universe are just simply too plentiful. You’ll find fresh apples laying in prime condition in musty lockers in dark corners of basements. Every merchant is just dying to get rid of his or her Potato Crisps and Dandy Cakes. Not to mention factoring sheer luck into the equation. I stumbled quite accidentally into Nipton and was welcomed by the Legion to casually loot an entire well-stocked town with bounties of food literally still on their plates in each home. 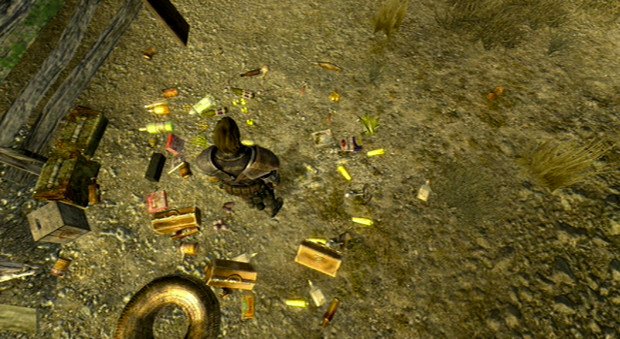 Water was even easier. I had forgotten that this commodity was, quite literally, everywhere. Finding water, sometimes even fresh supplies, was a pitiful challenge. The city engineers of Las Vegas seemingly built a water pipe system that would not only survive the end of modern civilization, but continue to work for 300 years. I wonder how much making the water pipes for the toilets of the entire state out of Admantium must of cost?

After about an hour of play, I could care less about paying attention to my food and water schedule. It was a repetitive bore and did nothing to heighten the frantic scrounging I had anticipated. Instead, beyond foolhardy attempts to exaggerate scavenging, I found one decision in particular had become a maddening thing to adhere to. I hadn’t even considered its impact and, in fact, it was nothing but a last-minute suggestion from my roommate. But what became increasing clear was that playing Fallout without the use of a HUD does more than make the game hardcore, it rewrites the entire genre.

As it stands, Fallout’s HUD is pretty reduced and it may seem difficult to see how its removal would make such an impact. But it’s easy to forget that Fallout labels quite nearly everything. Enemies, friends, even the beasts within your proximity earnestly considering your destruction. Labels are important to the game and without everything being so easily branded for me, I could no longer make casual decisions. Other characters were no longer shown in simplistic green and red – a lone figure in the distance could be anyone. Was it a friend? Enemy? Stripping what seemed quite extraneous, gameplay with no HUD turned the Fallout experience into a constant, white-knuckled, heart-stopper. 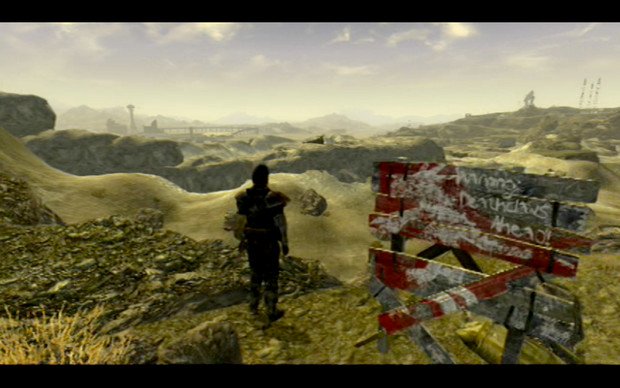 Everything had to be analyzed first. Even in the safety of towns and cities, I still had to work just as hard. I could no longer differentiate a generic bouncer from a named gambler I was sent to find. I carried on conversations with NPCs I had never even seen before. I realized how easy it was to get blinders on when sent from objective to objective. Without labels, every character had become of equal importance, which made any small odd-jobs rather difficult. I had to survey rooms, ask hotel clerks for information, and actually unsheathe my critical thinking and discern the world around me.

Stealing, too, changed and drifted into an uninformed, amoral realm. Without items carefully color-coded to represent what was lootable and what wasn’t, I had to assess. Is this someone’s? Is someone around to see me take it? This departure from notifications also seemed to make stealing easier. When Fallout wasn’t scolding me from the top right-hand corner, immoral acts somehow lost their potency. I suppose, that was all it took for me to find stealing accessible. Or was it just my perpetual state of desperation that made it acceptable? Had it really just been a karma score that adhered me to morality this whole time?

I found myself spending most of the game camped out on cliff ledges, staring for huge chunks of game time, trying to assess the threat level of characters through my binoculars. Which was hard to do, since even wandering doctors are armed. I had to remember uniforms, look for NCR helmets or jackets, monitor behavior, and sometimes just avoid people entirely. With every element of the game now reduced to my own discretion, I had to give the game my full attention. In my living room, I took notes. Scribbled down common identifiers of each faction. (For the Legion, for instance, I wrote “No pants”) I could no longer travel roads and I didn’t dare travel at night. Without the light of day, creatures and raiders got the jump on me. My sight was my life. 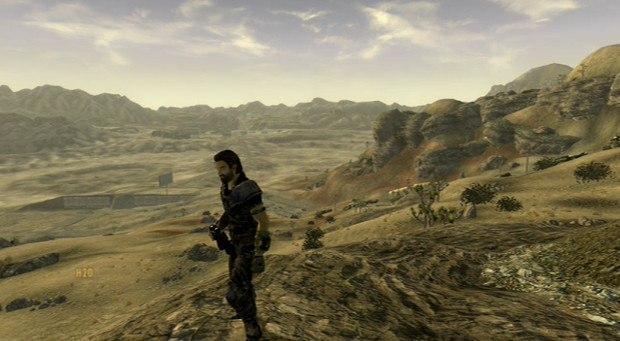 Even more still, the lack of labels led to tragic mistakes. For instance, early on, I foolishly rounded a hilltop without caution and spotted what seemed like a lone wasteland savage, standing stoically in leather, spiked armor and touting an assault rifle. I took my advantage and opened fire on the target from the safety of my hilltop. He went down quick and I strolled up to search his cargo for some much needed supplies. It was only then I discovered the kindly wasteland merchant he was guarding cowered behind the burnt husk of an old car, previously obscured by a fallen billboard. I quite literally cried out in alarm at the tragedy as the panicked merchant drew his pistol on me in presumable self-defense. I did the only thing I could and shot him down before he could kill me.

My face crumpled in half-alarm and terror, I stood over the two bodies, the now lone pack-Brahmin groaning feebly beside me. I had become overly confident and made a terrible mistake. I could not reload my save and fix it. I had murdered a cowering man because I made brash decisions and careless assumptions. After this, I stopped traveling on open roads for fear of accidentally attacking another innocent traveler. Instead, I stuck to the unforgiving wastes, banishing myself to forging a single path unaided.

The journey progressed that way, somewhat tedious but unfalteringly terrifying. I had previously complained that New Vegas felt remarkably vacant compared to it’s predecessor, but I certainly felt differently about that claim after playing through “ultra-hardcore” mode. After my short journey, the Wasteland felt like it was teeming with life, most if it bent on my destruction. When firefights occurred, they were fast and visceral. When enemies attacked, it was sudden and unrelenting. When food got low, things became desperate. Previous notions of playing a morally upstanding character faded a bit and the ethical lines of the game turned a little bit gray.

In the end, while the attempts to increase scavenging and make enemies tougher made things harder, removing the HUD did something different. It made the game wholly dissimilar to the Fallout: New Vegas I had once casually beaten. I was infinitely fearful of every living thing, terrified of the going out at night, and even further petrified of enclosed, indoor spaces. It had somehow drifted New Vegas into the realm of survival horror games. It engaged my critical thinking so unwaveringly, that I could only get to playing this character in small bits because the restrictions were so taxing. But, without a doubt, it was one of the most engaging, severe, and player-inclusive gaming experience I’ve ever encountered.