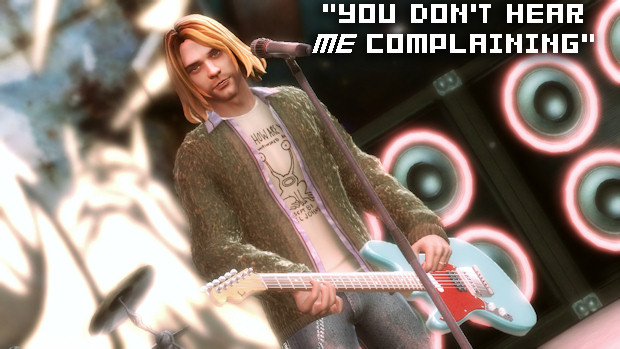 It’s not just Kurt Cobain’s non-murdering wife who hates what Activision has done to Kurt Cobain in Guitar Hero 5. Krist Novoselic and Dave Grohl, former members of Nirvana, have issued a statement criticizing Activision’s use of the dead musician, stating that they believe he deserves better.

“We want people to know that we are dismayed and very disappointed in the way a facsimile of Kurt is used in the Guitar Hero game,” states the bassist and drummer. “While we were aware of Kurt’s image being used with two Nirvana songs, we didn’t know players have the ability to unlock the character. This feature allows the character to be used with any kind of song the player wants. We urge Activision to do the right thing in ‘re-locking’ Kurt’s character so that this won’t continue in the future.

“It’s hard to watch an image of Kurt pantomiming other artists’ music alongside cartoon characters. Kurt Cobain wrote songs that hold a lot of meaning to people all over the world. We feel he deserves better.”

Aw, come on. It’s not like Kurt himself can get offended by it.