I wouldn’t mind seeing one of these for every anniversary

This past weekend Nintendo just released the Game & Watch Super Mario Bros. handheld, in fact, and we put it through the paces for a bit. $50 is a lot to spend on two NES Mario titles, a classic Game & Watch minigame, and a clock: but collectors will likely cherish it. The presentation is pretty slick, as evidenced by the case it comes in. If you take a look at the gallery below you can see the translucent slip case, which adds some cute Mario-themed festivities into the mix. The box itself could be displayed (including its hilarious “mild cartoon violence” text next to the ESRB rating.

This thing is small, measuring at 67mm high, 112mm long and 12.mm deep. It’s also light, clocking in at .15 pounds. It sports a classic NES style d-pad and “A/B” button layout, as well as buttons for swapping games (“game”), triggering the clock setting (“time”), and entering the main menu (“pause/set”). The screen is an LCD.

As a pack-in you’ll get a 30cm USB type-CA cable for charging, and that’s about it (the AC adapter, as is customary with many modern electronics, is sold separately). It sports a lithium ion battery that lasts around eight hours (more than enough to play some retro romps) and it takes around three and a half hours to charge.

The clock is one of the more interesting elements of the handheld, as it has the potential to showcase 35 different animations, including guests like Shyguys who aren’t in the included games. A second-hand that’s a little pixel that rotates around the screen is cute too. Unfortunately, when trying to use it as a permanent clock fixture, I found that the unit goes to sleep automatically after a period of non-use. Great for most people, not great for me in this instance. 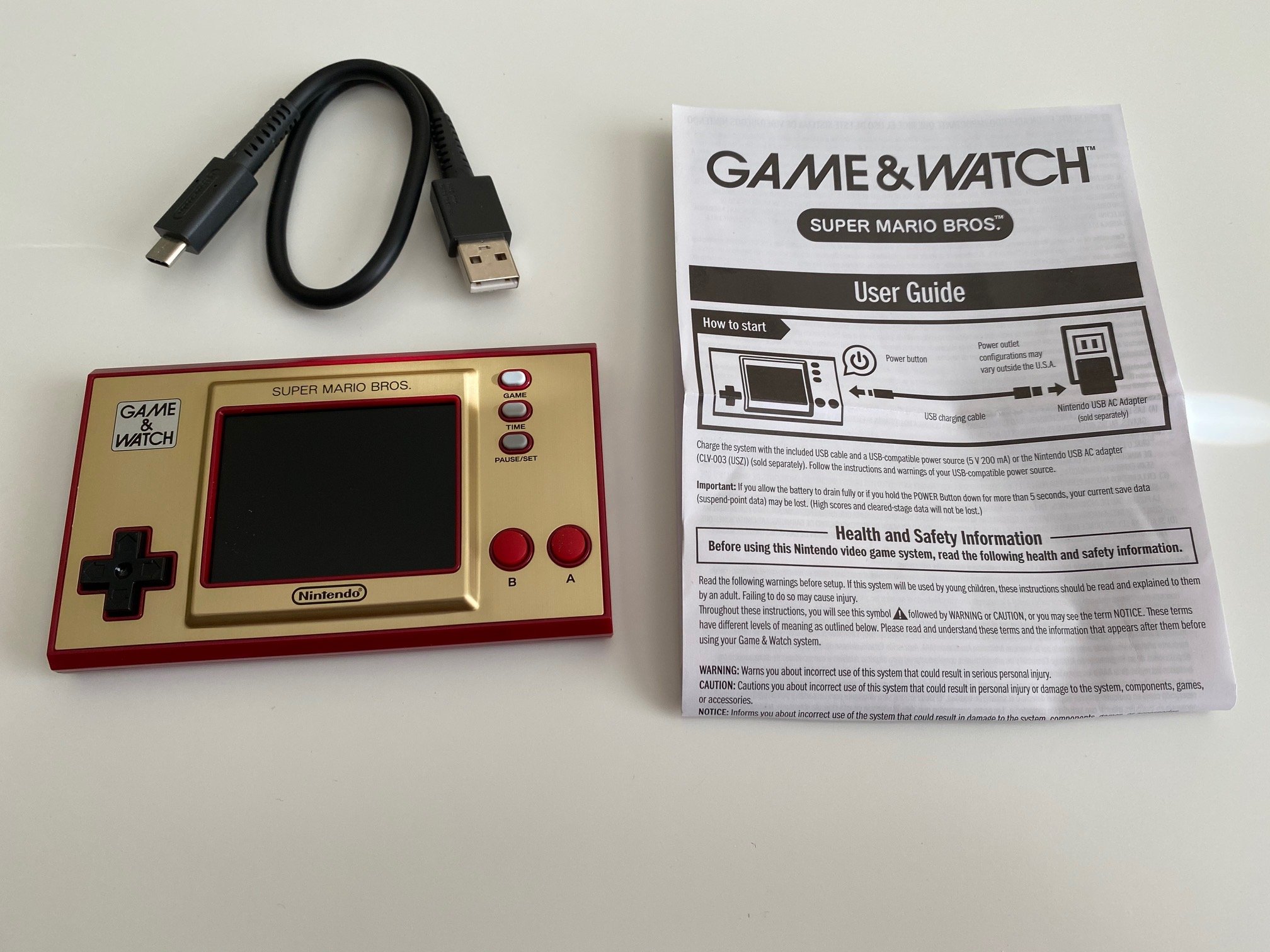 We’ve talked at length about both of the included Mario games before (Mario 1, Lost Levels), but suffice to say that the original is an absolute classic and Lost Levels certainly has its place in Mario history. I found myself running through all of the original Mario again like it was nothing. There’s also a very basic “ball” minigame with Mario guest starring; meant to pay homage to the original Game & Watch series. You may recall that Nintendo re-released “ball” already back in 2010 with their Club Nintendo exclusive handheld.

Options are limited, with concessions for sound and brightness levels, as well as the opportunity to reset each game. The unit supports picking up where you left off with each game (as you swap) despite a lack of a formal “save state” system. If you want, you can switch between all three. A handful of little secrets and cheats are the cherry on top.

I love the design, adore the form factor, and the novelty of it: I just wish there were more games included. Having been to many conventions and witnessed many active participants in the modding and game preservation circuit, I know it would be super easy for anyone to make their own version. As it stands I only feel comfortable recommending this one to collectors.

But given that there are millions of us out there, I think this will do just fine. Now give me a Zelda anniversary unit with Zelda 1+2 (and more!). Or a Metroid one. Or…you get the picture. These extremely optional novelties are a fun way to celebrate the past, so long as you’re willing to pay the Nintendo tax.

[These impressions are based on a retail build of the hardware provided by the manufacturer.]