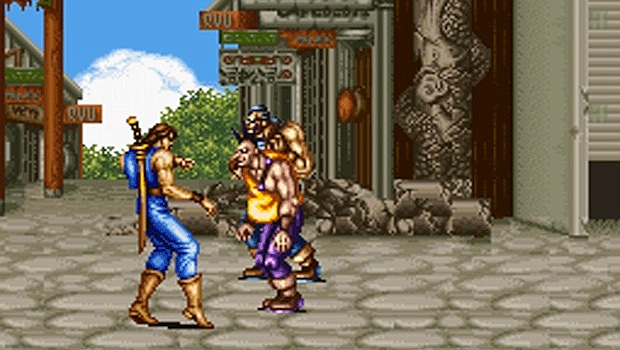 Things have happened on the Nintendo downloadable front. This morning ushers in one title on each of the publisher’s three digital platforms. Don’t expect the amazing, but don’t expect a clock either.

The new (old) Virtual Console title is Final Fight 2. Hitting at 800 Wii Bones, this follow-up to its smash-hit successor is much more of the same. Maki, Carlos and the loveable belt-strapped Haggar must travel to the armpits of Earth to beat dudes up and save someone or something. But the story doesn’t matter; this game is all about pummeling 2D enemies in the face.

The DSiWare title is the 500 Nintendo DSi Points Pinball Pulse: The Ancients Beckon. In the game, you control flippers and knock a metal ball around. Awesome, right?

The WiiWare title is an interesting one called Gravitronix (500 Wii Points). Developed by Medaverse Studios, it’s a 2D board game style thing that has players shooting projectiles at each other and deflecting them as well. The press release — available below the fold — makes it sound a bit more strategic than what it probably is.

That’s it for this week. What the fug are you guys downloading this week?

Pinball Pulse: The Ancients Beckon™
Publisher: Nintendo
Players: 1
ESRB Rating: E (Everyone) – Comic Mischief
Price: 500 Nintendo DSi Points™
Description: Pinball takes on mythological proportions in this Nintendo DSiWare exclusive. Choose from two modes of play (Regular Game or Daily Game) and begin your journey to becoming a pinball champion. Conquer mythic quests, collect gifts from the 12 Olympians, and push your skills to the limit by facing Medusa, the Sirens and more. Your portable pinball table will give you a quick adrenaline rush as you watch the steel ball fly through ramps and carom off bumpers all over the playing field. Rack up combo points, open specific game modes and enlist the Oracle for some help. Will you accept Zeus’s challenge?

Final Fight™ 2
Original platform: Super NES™
Publisher: Capcom USA
Players: 1-2
ESRB Rating: E10+ (Everyone 10 and Older) – Violence
Price: 800 Wii Points™
Description: It’s been several years since peace settled in Metro City. With Cody and Jessica on vacation and Guy resuming his training out of town, everything seems to be in order. But Haggar is feeling uneasy after learning that Mad Gear was not completely destroyed. Once again, the Mad Gear Gang has emerged, and this time they want revenge. They’ve kidnapped Guy’s master, Genryusai, and Genryusai’s daughter, Rena. Now Haggar must travel the globe in search of Genryusai and Rena. Hopefully, with the help of Maki and Carlos, the reign of the Mad Gear Gang will be destroyed.

Gravitronix
Publisher: Medaverse Studios
Players: 1-8
ESRB Rating: E (Everyone)
Price: 500 Wii Points
Description: It’s time to claim your rightful place as the champion of the Gravitronix arena, but get ready to deal with up to seven other players who are all shooting for the same title. Vanquish your opponents with four different projectiles and the powerful beams of your gravity platform. Intercept attacks and take careful aim at exposed vulnerabilities. Deflect incoming projectiles or capture and charge them with energy for devastating explosive attacks. Team up with a friend and battle through campaign mode, or recruit up to eight players on a single Wii™ system in versus mode for an all-out battle. Customize your matches with a variety of different options, such as flooding the arena with projectiles or making the game insanely fast. No matter how you like to play, grab your friends and have a blast.