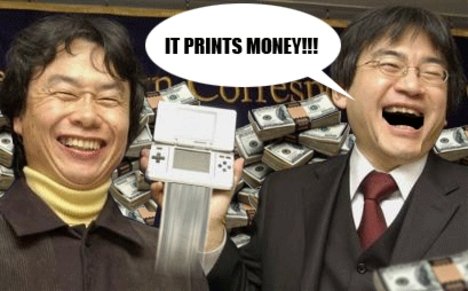 Nintendo is awesome at two things: Cranking out the same franchises you’ve been playing for 20 years and collecting on that hard work by the millions. In fact, Nintendo has done so well recently because of the incredible success of the DS and the so far, so good record of the Wii, that they’ve raised their money-making predictions. From Reuters via GameSpot:

“Merchandise does not move in the January-March quarter–that is the norm in this industry,” Nintendo spokesman Yasuhiro Minagawa was quoted in a Reuters report. “But ours somehow did.”

Previously, Nintendo anticipated posting net sales of 900 billion yen ($7.6 billion) for the year, but today the company bumped that figure up more than $555 million to 966 billion yen ($8.1 billion). The company expects to release its full results for the fiscal year on April 26.

Nintendo, printing money on the backs of diehard loyalists since 1985.